Private equity sharks take a bite out of the 'blue economy'

Close-up of Chinook salmon in a fish hatchery holding tank 2019. Photo iStock - Adri
The people of Calp, a town in the Spanish autonomous community of Valencia, have been fighting to block the creation of a 50 hectare, mega fish farm just off of their coast. They say it will jeopardise the local tourism industry and put the area's environment and small-scale fisheries at risk, while providing minimal benefits for locals.[1]
Even the mayor of Calp, Ana Sala, is fiercely opposed to the project. In August 2022, in a meeting with the company behind the project, she told them, "What you want to set up here is abominable and it is our obligation to defend our municipality and its interests. Accordingly, we will continue to fight against it."[2]
The company behind the project is Avramar, the largest aquaculture company operating in the Mediterranean sea. But Avramar is no local company. It is owned by the Wall Street private equity firm Amerra Capital and the Abu Dhabi sovereign wealth fund Mubadala Investment. Since Amerra first acquired the company in 2016, Avramar has been on an expansion binge. Some of that expansion has taken place off the coast of Valencia, including one super-sized fish farm that stretches across 144 hectares near El Campello, but most of the expansion has occurred in Greece.
Greek marine aquaculture has surged over the past two decades, and the country is now the main supplier of farmed fish to the rest of Europe. In the 1980s, only 2 percent of fishery products came from aquaculture; today it accounts for two-thirds. The initial growth was driven by small- to medium-sized Greek family aquaculture operations. But, more recently, investment has come from private equity funds, eager to make profits through a consolidation of the industry. One of the first private equity deals occurred in 2006, when an Athens-based private equity firm, Global Finance, took over the fish farm operator Andromeda. Ten years later, after a major expansion of the company within and outside of Greece, Global Finance sold it off to Amerra. Over the next three years, with backing from Mubadala, Amerra acquired two other large Greek fish farming companies, both of which also had farms in Spain, and merged them to form one massive company, Avramar.
When Avramar was formed, the EU Commission's Competition Directorate ruled that it had to sell off about 20 percent of its farms.[3] But this only opened the door to another private equity firm, the Luxembourg-based Diorasis, to buy up the farms and quadruple its aquaculture production.[4] Diorasis is backed by a group of Greek diaspora businessmen and, according to Greek media, Bill Gates.[5] Together, Avramar and Diorasis now control over two-thirds of Greece's fish farming industry and, despite opposition from coastal communities, they are intent on expanding further.[6]
Where the cash is flowing
Greece and Spain are not the only places where private equity funds are aggressively moving into the seafood sector. Undercurrent News has been tracking the involvement of private equity funds and other financial players in the sector since 2015. They say that the number of deals by financial players is growing -- and in 2021 accounted for over 43 percent of all 194 deals within the sector that they identified.[7]
Graph 1. Share of total merger and acquisition deals in the seafood and fisheries sector by financial companies (finance) and by corporations from within the sector (industry). 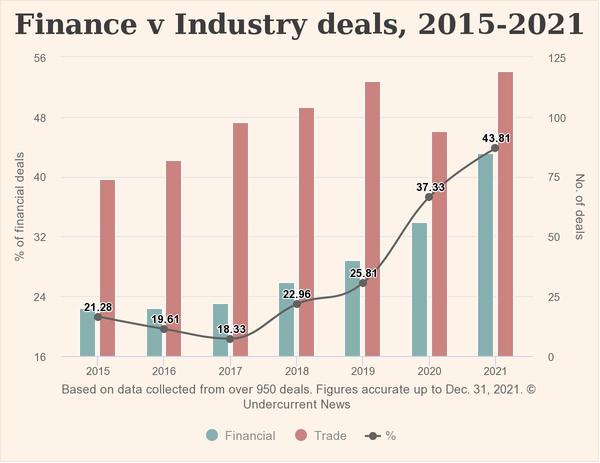