Can India turn the tide on the supermarket tsunami? (This article originally appeared in the February 9, 2012 edition of Mint) 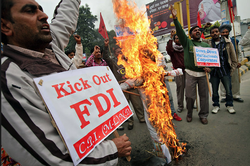 The standoff over the entry of multinational retail in India is being watched around the world. Walmart and other retail giants are desperate for a bigger slice of India's $400 billion market. They nearly got their wish last November when India's Prime Minister Manmohan Singh and his cabinet opened the door to 51% foreign control of multi-brand retailers. But India's 44 million small shop owners and retail workers staged protests across the country, forcing the government to retreat for the time being. Big retail sees it as a minor setback to its inevitable conquest of new markets. Others are hoping that it was a turning point in a global struggle over who controls food.

India is one of the countries facing what is referred to as a third wave of supermarket expansion in the global South. Earlier waves hit much of Latin America, Southeast Asia and Central Europe. Today the targets are China, Peru, Vietnam, Russia and Kenya. The expansion is happening at a breathtaking pace-- five times as fast as it did in the EU or the US, and mainly because of the liberalisation of investment through free trade agreements (FTAs). In the case of India, the moves to open multi-brand retail to FDI coincide with negotiations for an FTA with the EU, which wants such measures locked into the agreement. 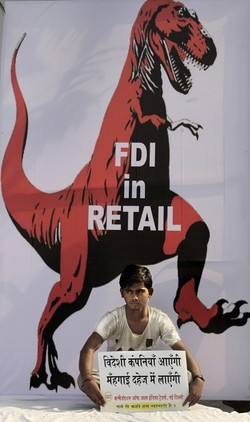 It is easy to see why India's small retailers and workers are so upset. Economist Jayati Ghosh says that for every job a foreign retailer creates, around 17 to 18 will be lost. But many others will be hit hard too, especially along the food chain.

India's food supply is still largely in the hands of peasants and small co-operatives, wholesalers and hawkers. They will not be welcomed into the procurement networks of the multinationals. Supermarkets deal with preferred suppliers that source and ship food from around the globe. Indonesia was one of the first Asian countries to liberalise its retail sector. Today over 70% of the fruits sold in its supermarkets are imported.

Supermarkets also insist that their suppliers follow standards that they set themselves with other multinational corporations. Walmart works with Germany's largest seed and pesticide company, Bayer, to establish "good agricultural practices" on the few Indian farms it sources from.

The farming practices of most of India's farmers, as safe and sustainable as they may be, simply don't match with the checklists of the supermarkets. The economics don't fit either. One United Nations study put the cost per farm for GlobalGAP certification, the dominant standard for global retailers, at over €1,200, far beyond what the average Indian farmer can afford.

Big retail's expansion into India will be especially deadly for dairy, where 85% of the market is supplied by an "informal sector" of small-scale vendors selling milk they collect from small farmers. The system is a source of income for millions of families and a safe and affordable source of nutrition for millions more.

Multinational supermarkets and food companies like McDonald's want nothing to do with this informal sector. They want the milk produced on large farms and packaged and pasteurised milk by big processors. So as supermarkets expand, industrial dairy does too. Danone is now constructing new processing plants in India. Cargill and the Kiwi dairy giant Fonterra are pouring millions of dollars into megafarms, as are Indian companies, like Reliance and the Appejay Group. And the same EU-India FTA being used to open the door to FDI in retail could also open the door to imports of subsidised milk powder, with deadly consequences for India's dairy farmers.

The issue here is not about increasing production to match growing consumption. India is already self-sufficient in milk, thanks to India's small farmers tripling national milk production between 1980 and 2006. There's no reason why these farmers cannot meet today's growing demand. The real issue is that corporations are moving to steal the dairy market from the poor. It's a situation transpiring around the world, from Colombia to Kenya, putting at risk the livelihoods of the 15% of the global population involved in dairy production.

Indians struggling against FDI in retail and the FTA with the EU are in fact facing off against an unprecedented expansion of the corporate food industry in the South. To keep their profits growing, corporations, fuelled with cash from banks and financial houses, are making an aggressive play for every piece of the food chain they can grab in “emerging markets”.

The battle around retail is particularly crucial. When big retailers enter countries they expand rapidly and take away markets served by the poor-- hawkers, farmers, pastoralists, fisherfolk, and workers. The gains for the corporate food chain translate directly into losses for these people, who simply have no place within it, not even as consumers.

This is why the struggles playing out in India are being watched so closely around the world. A billion people refusing to make room for the corporate tsunami is a huge boost for everyone trying to turn the tide when it comes to who controls food.