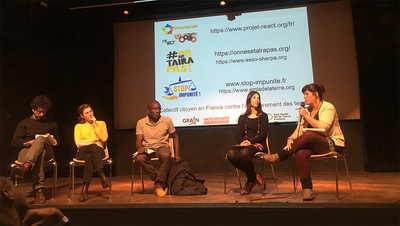 The French "We will not be silenced" and anti-land grab collectives held a public debate in Paris on 13 February 2019 where these issues came up. Photo: Régis Essono
In 2018, the NGOs and journalists were found not guilty. Socfin moved to appeal, but just last week gave up. The company has been tweeting and touting that, in reality, they "won" because in the court's ruling, the judge mentioned that the words "land grabbing" were of a defamatory nature. But as Sherpa and other legal experts snap back, this is incorrect. Even though the court found the term “land grabbing” defamatory because it’s a value judgement that can be debated as to whether its true or not, there was no defamation! The media and activists were doing their jobs, reporting and relaying what the communities are experiencing, saying and suffering through, in good faith.
Winning in court, i.e. achieving justice, is not the point of these corporate lawsuits. The point is to wear people down, intimidate journalists and activists, waste people's (including the court's, apparently) time and energy. They're pretty good at that, but not enough.
We will all continue doing our work to call out companies and government officials for their involvement in land grabbing and related abuses as people on the ground truly live it. We will call a spade a spade and fight for real justice. There is no point in doing otherwise. We have to stop the crime of land grabbing altogether.