A label for bicycle chicken? Time to ask some questions! 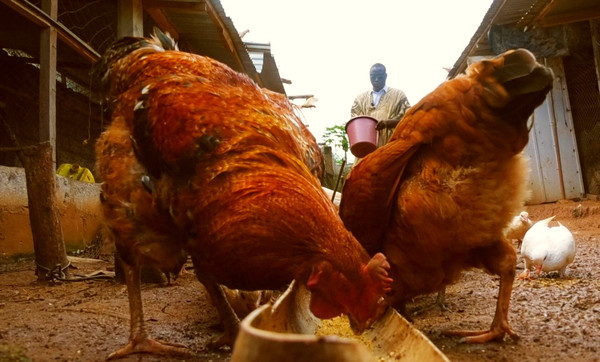 Photo: Eric Biantuadi for GRAIN
Local livestock farming and food sovereignty
This initiative taken by the government of Burkina Faso, whilst offending many and resurrecting the spectre of past conflicts5, does have one positive effect. This is that it opens an important debate on the future of poultry farming in Africa, and on this important food threatened by industrialisation. It would be better to use other means of promoting farming of native chickens by small producers, rather than exclusive appropriation of the name or intellectual property (a colonial/Western instrument), or of the market. Voluntary “labelling” to make a product known can be useful, as can collective food sovereignty projects which bring people together to defend a product, for example. But it should be ensured that access to the label (awarding) is not monopolised by large companies such as AgroTOP, an Israeli company which installs large-scale poultry rearing infrastructure in Nigeria and Ivory Coast, or the genetic manipulation projects prized by Bill and Melinda Gates. Otherwise, we will see a recurrence of what happened in the region with the Galmi Violet onion.6
Defending, protecting, and promoting “bicycle chicken” and small-scale livestock farming in general is a good cause. There are a host of measures which could be useful to do this: a ban on imports, policies promoting local chicken, support for producers (price regulation, tax measures, provision of infrastructure, etc.).7 But let’s not play at appropriating a name shared by all of Western and Central Africa, and let’s not fall for governments trying to have their cake and eat it!
Cover photo: In many countries in Western Africa, native chickens are known as “bicycle chickens”, because when they run fast, they look as if they were riding a bike! In Burkina Faso, they also bear this name due to the fact that after slaughter they are taken to market by bike or motorcycle. Regardless of the country, this name is used for local chicken as opposed to imports of broiler chickens (selected breeds) and frozen industrial chicken. Source: "Poulet Bicyclette" - Bill Gates Youtube Channel

1 Mahamadi Tassembedo, in direct communication with GRAIN, on 3rd August 2021.
2 In most countries, a GI is refused if this is already the name of a breed of animal or plant variety, as this could lead to confusion.
3 It should be noted that breeding takes place in France, to avoid sending cocks to Africa in order to protect their “intellectual property” (the elite bloodlines).
4 Silverlands Tanzania https://www.silverlandstanzania.net/ and SilverStreet Capìtal https://www.silverstreetcapital.com/poultry-and-feed.
5 In 2019, a prize was awarded to a product named “Faso Attiéké” in Burkina Faso, which led to an outcry in Western Africa. Attiéké, or cassava semolina, is a staple food in many countries, particularly Ivory Coast. The word also comes from “adjèkè”, from the Ebrié language in the south of the country. How can anyone claim ownership of it?
6 The Galmi Violet was selected in Niger and spread across Western Africa. In view of its popularity, Tropicasem, the Senegalese branch of a French company, attempted to register plant breeder’s rights with OAPI. This caused uproar in the region, and the company eventually did not succeed, but the damage was done. Niger cannot claim the name, and commercial seeds sold under the name “Galmi Violet”, but which are actually from South Africa, are still in circulation.
7 South Africa is currently developing its poultry industry with a ban on cheap imports of foreign chicken (USA, EU, Brazil). The result is that local production is increasing (up 10% per year), in spite of Covid.