A first ever bilateral trade deal between the European Free Trade Association (Switzerland, Liechtenstein, Norway and Iceland) and Mercosur (Argentina, Brazil, Paraguay and Uruguay) was signed in August 2019. While the agreement has not yet been published nor ratified, enough information has already been released by various governments to assess some of its potential impacts.1
The EFTA pact with Mercosur was negotiated to keep pace with the European Union-Mercosur trade deal. One of the major controversies surrounding the EU agreement was, and still is, its impacts on climate change. Studies say it will lead to more greenhouse gas emissions, particularly through increased exports of meat, soybeans, maize and ethanol from Brazil and Argentina as a result of new quotas, much of this from large industrial farms often associated with deforestation and land grabbing.2
The EFTA deal with Mercosur, along with a similar deal with Indonesia that barely passed a recent referendum in Switzerland, is being showcased by the Europeans as a “new era” trade pact shaped by concerns about climate change, human rights and environmental issues. But it is not much different from the EU deal when it comes to emissions from food and agriculture.
For sure, the EFTA-Mercosur pact is a much smaller trade agreement. But if it is implemented and the quotas are filled, we calculate that it will increase greenhouse gas emissions from farm trade by at least 75,500 tonnes per year, looking at the ten most climate-impacting products. More than 70% of those new emissions will come from Mercosur exports to EFTA. But 15% will come from EFTA’s cheese exports alone.
This report presents those climate impacts, followed by several broader concerns.
The climate impact of EFTA-Mercosur from food and ag
The EFTA-Mercosur trade deal was drawn up in parallel to the EU deal, but it is hardly talked about. For the EFTA bloc, with just 13.6 million people, it is one of their biggest free trade agreements ever. They expect to benefit primarily from its liberalisation of services, including shipping. For the Mercosur bloc, with its 284 million people, it’s a small deal. They expect it to lead to an increase in investment from EFTA-based companies as well as the opening of the bloc’s well-protected agricultural markets. Agriculture currently accounts for 12% of Mercosur’s exports to the EFTA states.3 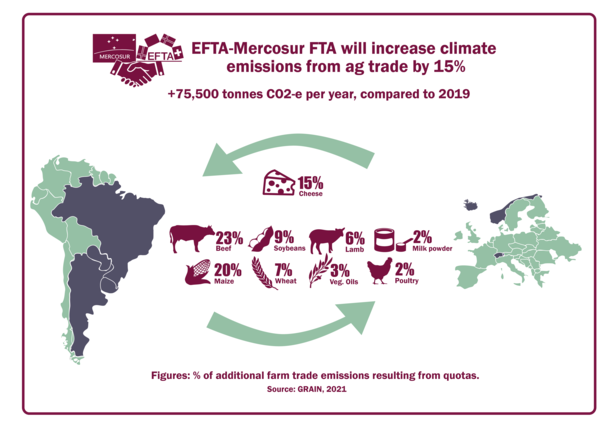