Lessons learned from 30 years of GRAIN

GRAIN staff, board and friends in the Philippines, 1997
30 years of GRAIN. Click here for a timeline and to dig deeper into GRAIN’s story
GRAIN has grown a lot and yet changed very little in its essence since it was set up in 1990. What started as a passionate and determined initiative of a few activists in Europe has matured into a solid, diverse and decentralised international organisation. Over that period, the politics and vision of GRAIN have not wavered, only grown deeper. Here we offer some of the lessons that we learned and shifts we undertook, over this 30 year period, in the hope that they can be useful for others.
Shifting our focus from the public sector to the corporations
In its first decade, a lot of GRAIN’s work was oriented to policy debates at the international level: raising awareness, doing advocacy and lobbying at UN bodies and other governmental fora. We soon realised, though, that there was a huge gap between what was being decided in these far-off institutions and what was happening on the ground. This dovetailed with our own decentralisation process, through which GRAIN spread its roots in the global South, to better work with civil society and small farmers’ organisations there.
At the same time, we understood that corporations were very much dictating public policy. This was obvious in the international fora, where lobby groups reign, but just as true at the national level, where aid dollars were tied to trade objectives and trade agreements were all about promoting the role of the corporate sector. Also, public agricultural research - an intensive area of scrutiny and debate in GRAIN’s early years – was fast going down the drain and being privatised. At the beginning of the century, GRAIN started focussing more on the role and impact of corporations, to try to understand and expose how they operate and develop strategies with partners on how to deal with them. We are very glad we made this shift as we feel we really make a contribution here. 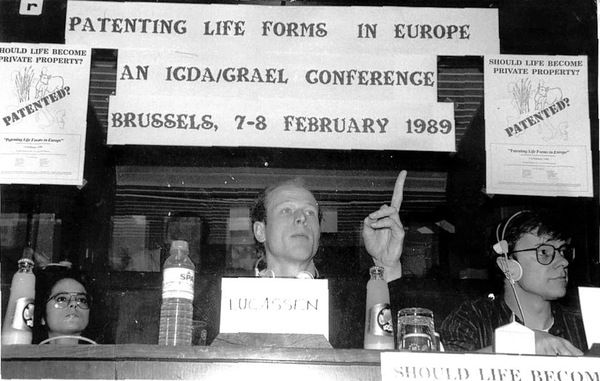 Broadening out from seeds to the global food system
Initially, GRAIN was mainly focused on seeds and agricultural biodiversity and the specific battles around them. But after the global food and financial crises emerged in 2007, we broadened our programme to include land, water and the climate crisis. Together with our long-standing work on agribusiness and trade, we began framing our work around food systems, which gave us a much more complete understanding. This allowed us to better understand the dominant role of markets in shaping food production and to deeper analyse the connection between the food system and the climate crisis, to mention just a few examples.
Learning to work with social movements
For many years, GRAIN struggled to un-stick itself from the lobby and NGO circuits and work directly with social movements. This is not to criticise NGOs - after all we are one ourselves. But our commitment is towards people’s movements because they are the engines of change.
One important outcome of this was learning to work with La Via Campesina (LVC), a global network of small farmers organisations. GRAIN has become an ally of LVC based on years of accompanying the movement and a number of its members. From this work, we learned that movements are and need to remain firmly in leadership, while the role of groups like GRAIN is to support and, through that support, strengthen. It was LVC who developed the food sovereignty framework, and this has become a crucial frame for GRAIN and many others to maintain a clear focus and decide on priorities. We also started linking with movements fighting trade agreements and the climate crisis, offering our analysis and expertise on food systems as our contribution. GRAIN’s research, for which we are best known, is aimed to be of service to all sorts of social movements. In this process, GRAIN has learned to become a support group, which is very much how we see ourselves today. 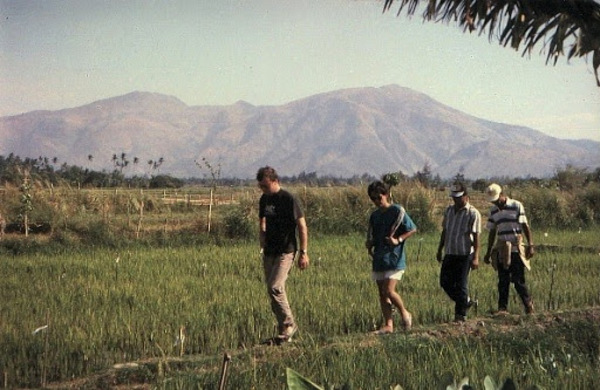 GRAIN staff in the Philippines, 1996

We always wanted to stay small and agile, seeing a 15-person limit as our ideal staff size. Otherwise, we saw the risk of needing too much structure and bureaucracy. We prefer to operate as a team of people who are autonomous, trusted and free to be creative, as this allows us to jump on new issues, stay ahead of the curve, respond to emerging needs and issues, and be nimble in the role we can play. This is key to allowing us to stay relevant. GRAIN is therefore organised to this end: we are horizontal, transparent and operate as a collective on the inside. We also highly value having programme staff who are local activists, deeply connected to the communities, partners and struggles in their regions. For us, having a mix of staff with a global mandate to monitor and cover international trends and staff with a regional mandate who can work directly with local partners, plus solid coordination support, allows for productive cross-fertilisation and keeps us grounded.
Land grabbing focus
When the world food price crisis broke out in 2007, and a new wave of land grabbing exploded around the world, GRAIN caught on quite early and was one of the first to document what was happening. We chose, however, to restricting our research and monitoring to projects that were displacing farmers for food production as a response to the food crisis. This meant that projects to lay down infrastructures, dig mines, build dams, carve out conservation initiatives or set up energy works often stayed outside our focus. We reasoned that focusing on land grabs for food production had a strong logic to it and was more manageable for a small team like ours. We also did not bridge our work with historical processes of land grabbing not triggered by the food crisis. Omitting these approaches meant that we couldn’t deal with an important part of the reality of land grabbing, which might have made our work less relevant to several groups. Nevertheless, our findings allowed us, along with our partners in the food sovereignty movement, to take up a series of major campaigns, which we are active on even today.
Connecting climate and food movements
Our first attempts to unveil the link between the industrial food system and climate change started back in 2009 with a special issue of our magazine “Seedling”. Before that time, there were few studies that gave us a clear picture of the role of the food system in greenhouse gas emissions . GRAIN’s findings managed to expose how much the industrial food system contributes to the climate crisis, including the emissions produced by the top global meat and dairy corporations. Lately, we have also begun assessing the climate impact of new free trade agreements in terms of their food and agriculture component. We contrast these findings with information on how peasant-led agrocology and food sovereignty can “cool the planet” -- both now and as the crisis worsens. But much of the climate debate continutes to focus on fossil fuels and energy as the source of the problem, including in the activist community. We have not been sufficiently active in helping bridge the food sovereignty and climate movements, a task we see as crucial in bringing together a broad movement to address the climate crisis. There is a need to continue to work on this.
Securing resources
A difficulty we often struggle with is trying to ensure that we are not seen as a funding agency – because we are not one! GRAIN used to rely on just a few European development NGOs to support our work. After the financial crisis of 2009, that changed. We began diversifying our funding base and have not stopped since. This has helped GRAIN keep afloat, but it also exposed us to a wider range of funders. We spend a lot of time introducing funders to partners and building joint projects with different kinds of groups, which we believe is a useful role we play. 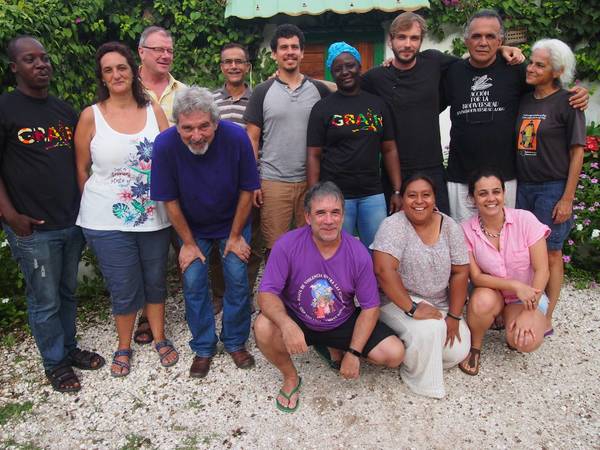 This milestone has put into relief that over the next ten years or so, a number of “elder” staff will transition out of the organisation, including the two founders. We have to transition in a way that will allow remaining staff to re-invent GRAIN and keep it strong. We need to bring in a new generation of activists. Many organisations face these transition processes at some point, and in GRAIN we have started discussing how to go about this. Any good experiences and ideas on how to do that are most welcome!

30 years in time
Telling our story links us into the bigger history of the struggle for food sovereignty. In the following timeline, you can see how GRAIN grew from a tiny European outfit lobbying on seeds at UN agencies to an international collective supporting grassroots movements. The beginnings of this work took seed in the late 1980s, when Henk Hobbelink and Renée Vellve worked together in a mostly European-based NGO campaign that supported on-farm seed diversity. There, they challenged the takeover of family-run plant breeding companies by large agrochemical corporations and campaigned against the extension of intellectual property rights to seeds. Together with other activists, they decided that this work needed a more autonomous and institutional footing, and in 1990 they founded GRAIN. Over the years, GRAIN expanded its scope but maintained its essense.
30 years of GRAIN. Click here for a timeline and to dig deeper into GRAIN’s story
30 publications for 30 years
As part of GRAIN’s commemoration of our 30 year anniversary, we have curated this compendium of 30 of our most influential, interesting and impactful publications. The topics range from seed laws to land grabbing, free trade agreements and the impact of industrial livestock on the climate crisis. Many of these publications were researched and produced in collaboration with partners on the ground from around the world.

Growing diversity: Genetic resources and local food security (1992)
Biodiversidad, sustento y culturas (1994)
Ten reasons not to join UPOV (1998)
Grains of delusion: Golden rice seen from the ground (2001)
In these days of Monsanto Laws, hope for real biosafety lies at the grassroots (2005)
Food sovereignty: turning the global food system upside down (2005)
Fowl play: The poultry industry's central role in the bird flu crisis (2006)
Fighting FTAs: the growing resistance to bilateral free trade and investment agreements (2008)
Stop the agrofuel craze! (2007)
Seized: The 2008 landgrab for food and financial security (2008)
Making a killing from hunger (2008)
A food system that kills - Swine flu is meat industry's latest plague (2009)
Seedling - Twenty years of fighting for seeds and food sovereignty (2010)
Pension funds: key players in the global farmland grab (2011)
Food and climate change: the forgotten link (2011)
The great food robbery: how corporations control food, grab land and destroy the climate (2012)
Planet palm oil (2014)
Hungry for land (2014)
Together we can cool the planet! (2015)
The great climate robbery (2015)
Seed laws that criminalise farmers: resistance and fightback (2015)
The global farmland grab in 2016: how big, how bad? (2016)
How RCEP affects food and farmers (2017)
‘Seeds in Resistance’ (2018)
The real seed producers (2018)
Don’t get fooled again! Unmasking two decades of lies about Golden Rice (2018)
Emissions impossible: How big meat and dairy are heating up the planet (2018
EU-Mercosur trade deal will intensify the climate crisis from agriculture (2019)
A journey through 30 years supporting the struggle for food sovereignty (2020)
Millions forced to choose between hunger or Covid-19 (2020)