Women farmers from the Kuoy indigenous community, on their land, blocking the sugarcane company's bulldozers
Almost a decade has passed since five companies believed to be subsidiaries of a single Chinese owned firm, Hengfu, were granted a set of economic land concessions (ELCs) by the government of Cambodia. The ELCs were signed in 2011 and gave the companies 40,000 hectares in the province of Preah Vihear for sugarcane production. This week we learned that the whole project has fallen apart. Rui Feng, one of the five companies, had built what it claimed was a US$360 million sugar refinery, one of the largest in Asia, capable of producing 2,000 tonnes of refined sugar per day, on its concession area. But now media reports state that the plant was never operational and that the Hengfu companies have shut down their entire operation.
Over this long and terrible period, affected communities, together with local NGOs like Ponlok Khmer, rose up and engaged in sustained resistance to the destruction of their livelihoods and culture. They exposed the ELCs as land grabs, demanded that the concessions be called off and the land returned to them. Diverse tactics were used to resist the sugarcane companies. In most villages, direct action was an important part of the communities’ strategy from the start. They confronted the bulldozer and backhoe drivers clearing their land. This initially opened negotiations with local authorities, which eventually led to the submitting of two complaints to the provincial court. These were dismissed in the end and no further action was taken by local authorities. From their side, the company filed a criminal complaint against community members and several Ponlok Khmer staff on charges of “illegal confinement and detention”. For the time being, the court has closed the investigation. Not the case, however. This has been "postponed" until further notice, with the charges against PKH staff still pending. 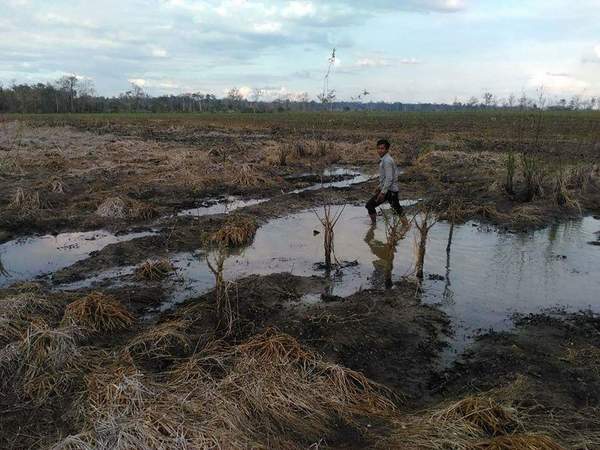 Villagers' rice field known as "Trapiang Kh-tom" in Chhaeb district, Preah Vihear province (Cambodia) forcefully occupied by the Chinese sugarcane company, Rui FengTo these accusations against Hengfu, Poek Sophorn, executive director of Ponlok Khmer, adds that the five companies violated the ELC arrangement itself, by growing rice in land designated for sugarcane.
The resistance of the Preah Vihear communities has attracted international attention and brought scrutiny to the case. In March 2018, more than a dozen regional and international indigenous communities, farmers, activists and human rights defenders groups sent an open letter to the Chinese embassy in Cambodia calling for urgent action1 . In September that same year, the People’s Coalition on Food Sovereignty co-organised a fact finding mission to Preah Vihear which reported the systematic land grabbing and destructive socio-economic impacts of the concession on the villagers. Following that mission, a global petition was launched asking the Kingdom of Cambodia to revoke the ELCs given to Hengfu’s subsidiaries. Some lobbying was also carried out to bring the case to the attention of the UN Human Rights Committee during its visit to Cambodia, as well as of the UN Special Rapporteur on Rights to Food.
The Heng Fu debacle in Cambodia adds to a long and growing list of failed farmland investments. Instead of food security or investment, these land grabbers have produced misery and conflict. With untiring resistance, the Kuoy community and everyone who supports them to protect their farms and forest, affirm that there is only solution : Stop these deals and give the land back to the people.
For more information, see:
------------
1 The Chinese embassy did not respond to the open letter