Food sovereignty is Africa's only solution to climate chaos 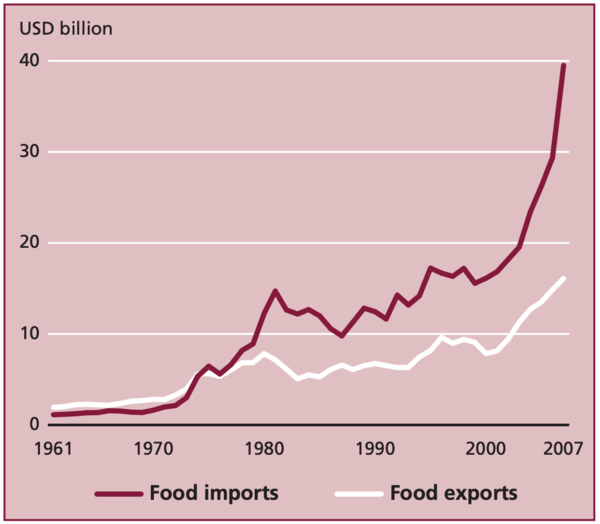 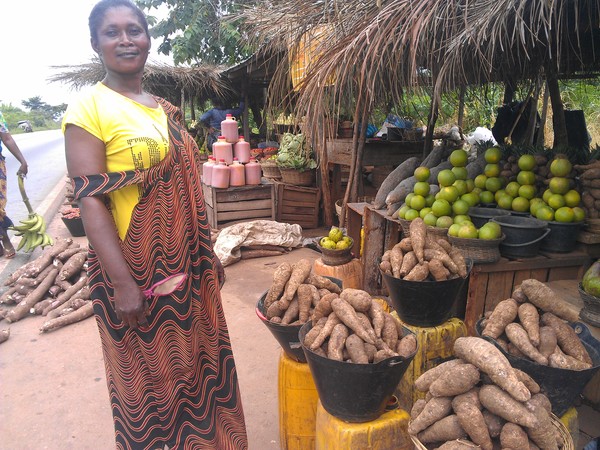 A peasant and street vendor in Kumasi, Ghana. Photo: GRAIN Egypt is another rice self-sufficient country in Africa, but with a much longer record. At the time of the rice price crisis in 2007-8, Egypt was actually exporting significant volumes. Much of the country's rice crop is purchased for the national food subsidy program, which provides discounted staple foods to nearly two-thirds of the country's households. When international food prices spiked in 2007-8, the price of bread shot up because Egypt is one of the world's top importers of wheat, but the government was able to partially offset this hike in the price of bread by blocking rice exports and keeping its population supplied with affordable local rice, despite efforts by the grain traders to keep their export channels open.[18]
What stands out in Egypt and Mali's rice self-sufficiency stories is the marginal role of big agribusiness and food companies. The main actors here are smallholder farmers and, in the case of Mali, a vast web of small traders and retailers, or, in the case of Egypt, a state purchase and distribution system. Both governments also regulated trade, and big business was not able to set the agenda on rice policy.[19] This shows that food self-sufficiency is achieved through government support of local production, not through corporate agribusiness and international trade.
These are simple and low-cost ways that African governments can get behind their food producers and support them in providing high-quality, locally-grown food for their populations, without having to depend on foreign donors. Yet most African governments remain entirely focused on supporting agribusiness corporations. Not only do they provide these companies with tax incentives and corporate-friendly regulations and policies, but they are even giving corporations their country's most fertile lands and important water sources.
It is incredulous that, in the face of a climate crisis and population boom, African governments have, over the past ten years, given away over 10 million hectares of fertile lands to foreign companies to produce foods for export. These large-scale land grabs were mostly undertaken without consulting the rural communities that live on the lands and have deprived them of the access they need, now and in the future, to land, forests and water sources to feed their communities and supply local markets.[20]
Corporate seeds are no cure for climate change
When it comes to seeds, African governments have similarly spent the past two decades complying with demands from the big seed companies to make their laws and regulations corporate-friendly, under heavy pressure from the World Bank, foreign governments and major donors like the Bill & Melinda Gates Foundation. The justification was always that such changes would drive private investment into plant breeding on the continent and provide farmers with improved varieties. But this investment is not happening. Instead, the number of formal plant breeders is in decline, even in some of Africa's biggest seed markets, and the vast majority of Africa's plant breeders are still working in the public sector. Moreover, the private sector is almost exclusively focused on plant breeding for big money-making hybrid crops like maize, and is hardly present when it comes to important traditional food crops that are more resilient to climate change like millet.[21] Meanwhile, the legal and regulatory changes that governments have implemented for the seed companies have damaged and even criminalised Africa's dynamic and innovative farmer seed systems, which continue to account for 80% of Africa's seed supply.[22]
Malawi provides a painful lesson of why programmes to boost local food production with corporate seeds do not work. A little over a decade ago, Malawi launched a national programme to distribute subsidised maize seeds and fertilisers to its farmers. Initially the programme focused on varieties bred by national scientists. But soon, after much pressure from the US government and the World Bank, the program became focused on hybrid maize sold by Monsanto and the Seed Co., a company from Zimbabwe. The first thing that Monsanto did when entering the country was to buy up the national seed company that had developed open-pollinated and hybrid maize varieties adapted to the local agroecosystems. Monsanto dropped the local varieties from circulation and pushed its own, patented varieties instead, even though some of the local varieties were much more productive than their own. Over the years, Monsanto, together with the companies that import and distribute chemical fertilisers, became the main beneficiaries of the government's seed and fertiliser subsidy programme. With Monsanto in control, the yields of hybrid maize went down, the soils were depleted, and, during the 2015-2016 drought and flooding seasons, the maize crops were almost entirely destroyed. In many places across Malawi, farmers are now moving back to local seed varieties, composting and reintroducing traditional crops that were left behind by the subsidy programmes, such as legumes that build soil fertility and hardy crops like cassava and millet.[23]
A vision for Africa's food systems in an era of climate crisis Fodder grass that was scorched by the persistent drought in Nakasongola district, Central Uganda. Photo: Robert Guloba/PELUM Uganda Any policy or programme that is going to effectively deal with the twin food and climate crises bearing down on Africa has to focus on the main actors in Africa's food system. Africa's food producers (small farmers, fisher people and pastoralists) and local markets still supply 80% of the food that is produced and consumed on the continent.[24] Africa's food supply relies primarily on the knowledge, seeds, animals, soils and local biodiversity that is maintained by Africa's small food producers. And Africa's growing number of urban consumers depend on the small traders and street food vendors to ensure their access to these foods. It is critical to note that the vast majority of these actors in Africa's food systems are women.[25]
Africa's food systems, based largely on agroecological practices and short circuits, are the ultimate in green, low emissions and resilient systems, and they supply diets that are among the healthiest on the planet.[26] Despite a policy environment that is designed to crush them, Africa's food systems are also the continent's economic engine, providing more livelihoods, jobs and revenue than any other sector.[27] Food imports on the other hand are a huge revenue drain on Africa's scarce foreign reserves (which, it needs to be said, are generated in large part from the sale of fossil fuels).
Africa's local food systems are what sustains the continent today, and what can sustain it into the future. The climate crisis will increasingly challenge these systems, especially if global greenhouse gas emissions in other parts of the world are not seriously reduced. African food producers will have to continue to adapt their practices and knowledge to cope with a changing and unpredictable climate. Local markets will have to integrate emergency reserves and other measures to ensure people's access to food and livelihoods during extreme weather events like floods and droughts. These are difficult but not insurmountable issues, and already there are many inspiring initiatives being implemented across the continent to prepare for climate change.[28]
It is important to recognise that the climate crisis requires approaches to adaptation that support Africa's food systems and are led by Africa's small-scale food producers, not approaches that rely heavily on chemical inputs and seeds sold by multinational companies, such as those often described as "climate smart" and promoted by programmes like A Green Revolution for Africa (AGRA). (see box: The hoax of climate smart agriculture).
The hoax of climate smart agriculture
Climate Smart Agriculture (CSA) has become one of the new slogans of governments, institutions and corporations when they talk about where farming should be heading in the era of climate crisis. The World Bank, FAO, CGIAR and other institutions all have set up special departments to deal with the issue, and websites to inform the public. These agencies, together with governments, NGOs and the private sector, formed the Global Alliance for CSA in 2015. Centrally involved in the launch of the Alliance was the fertiliser industry, which was trying to hijack the growing enthusiasm for agroecology. Of the Alliance's 29 non-governmental founding members, there were three fertiliser industry lobby groups, two of the world's largest fertiliser companies (Yara of Norway and Mosaic of the US), and a handful of organisations working directly with fertiliser companies on climate change programmes.[1] Initially a full 60% of the private sector members of the Alliance were from the fertiliser industry, and today they are still centrally involved in its management and priority setting.[2]
But everybody seems to have their own understanding of what CSA entails. The UN and the World Bank present CSA as achieving a “triple-win” of outcomes: increased productivity, enhanced resilience, and reduced emissions from farming. Underlying all this is the notion of ‘sustainable intensification’ that is promoted by fertiliser companies like Yara or pesticide and seed companies like Syngenta and Bayer/Monsanto.

The conceptual and practical vagueness of the concept allows everybody to make their own interpretations and avoid thorny issues such as power imbalances, socio-economic impacts and gender inequities.