by GRAIN, WRM and the Alliance | 4 Apr 2019 Land | Multimedia
Share this article

The booklet “Promise, Divide, Intimidate and Coerce: 12 tactics palm oil companies use to grab community land” has been launched today by the World Rainforest Movement, GRAIN and an Alliance of community and local organisations united against industrial oil palm plantations in West and Central Africa, including RADD, SEFE, Synaparcam of Cameroon, Muyissi Environnement of Gabon and ERA/Community Forest Watch of Nigeria. 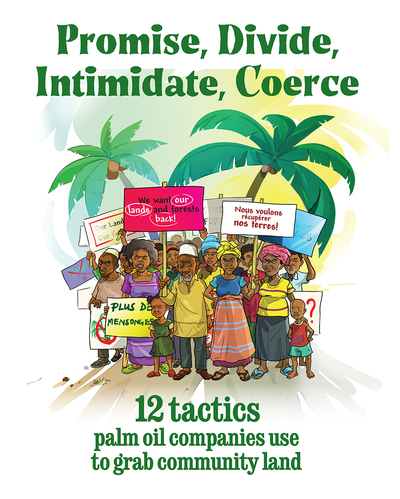 It describes the main tactics used by these corporations to take over community land. The aim is to support communities who want to strengthen their resistance and better prepare themselves to stop corporations from establishing industrial oil palm plantations on their lands. The booklet is available in English and French and can be downloaded and shared from here.
Oil palm plantation companies use very similar tactics wherever they operate to try and take over the land of communities. Knowing that they can count on high-level politicians and state authorities for support, the companies routinely make promises they do not intend to keep, try to silence and marginalise opposition to their plans and divide communities.
Where necessary, they coerce, intimidate, harass and even have opponents to their activities killed. Villagers, especially in remote places, often think such violence, intimidation and land grabbing is only happening to them. Community representatives may initially believe the plantation company's promises because they are unaware of community experiences elsewhere.
The reality, however, is that violence – and in particular sexual violence against women- is an inseparable part of the industrial plantation model and that the tactics companies use to take community land have been fine-tuned through decades of experience around the world.
This booklet describes the main tactics companies use to get their hands on community land. It considers questions such as:
This booklet is not a step-by-step manual that, if followed, will stop a company from setting up a plantation on community land. The objective of this booklet is to support communities who want to strengthen their resistance and better prepare themselves to stop corporations from setting up industrial oil palm plantations on their land. If a community is aware of community experiences elsewhere, it can more easily recognise company tactics. A community can then discuss different responses early on, so that when one way of resisting the company's plans fails, the community can persevere and try a different way, while being prepared for new tactics that the company might use.
We hope these descriptions of company tactics will inspire others to plan, prepare, and keep their communities united and to build alliances with neighbouring communities and regional or international networks. The booklet is a work in progress. We welcome feedback and suggestions for change.
GRAIN and WRM
Download the booklet [5.12 MB]
Table of contents
Introduction
Companies come prepared to take over the land: communities must prepare to resist
The importance of a community speaking with one voice.
Tactics that companies use to obtain access to community land
Tactic 1 Secure approval and support from high-level government officials
Tactic 2 Secure support from local elites and people trusted by the community
Tactic 3 Co-opt or pressure chiefs into making community land available for the company’s plantations
Tactic 4 Promise employment, improved roads, schools, health facilities
Tactic 5 Organise community meetings to create the appearance of community consent
Tactic 6 Silence local opponents of the plantation project
Tactic 7 Exclude and marginalise women |The violence against women that companies never talk about
Tactic 8 Forge signatures, falsify documents and withhold copies from villagers
Tactic 9 Use fraudulent land certificates and land surveys to take control of community land
Tactic 10 Promise improved food security but create food insecurity
Tactic 11 Promote smallholder contracts as an opportunity to ‘get rich planting industrial oil palms’
Tactic 12 Use partnerships with conservation NGOs and ‘Sustainable Palm Oil’ labels
to create a ‘green’ image | RSPO-certified conflict palm oil
Companies behind the expansion of industrial oil palm plantations in West and Central Africa
1 Who is behind the company?
2 Who is funding the company and its expansion plans?
3 Who will the company sell its palm oil to?
4 Palm oil companies are not charities
To find out more