A Ugandan cattle herder with indigenous Ankole Long-horned cattle searches for pasture, in an area where local lands were grabbed by a foreign company for a plantation. Photo: GRAIN
In 2009, the Nigerian government gave some white farmers from Zimbabwe loans and 1,000 hectares (ha) of land each to set up dairy farms in Shonga, an important centre of agriculture about 400 km from the capitol Lagos. Hopes were that their "ultra-modern" farms, stocked with Jersey cows brought in from South Africa, would make a dent in the country's massive dairy import bill.[1]
"I saw an opportunity here ... and I can tell you now there is no doubt I am here for the long term," said David Higgins, a South African hired to manage the operation's milk plant, which became a supplier of fresh milk to FrieslandCampina, the Dutch dairy corporation that has dominated the Nigerian market for decades.
However, less than ten years later, the project had all but collapsed. Most of the Zimbabwean farmers had left, and those remaining were "drawing their exit plan", as one Nigerian researcher put it.[2]
It turns out imported Jersey cows and white "modern" farmers were not the solution to Nigeria's dairy import woes. The problem, as every cattle herder in Nigeria knows, is the competition with the cheap imported powdered milk that companies like FrieslandCampina dump into the country. The Zimbabwean farmers and their modern methods were equally powerless against it.
Nigeria imports about 98% of the dairy products consumed in the country and spends an average of USD 1.3 billion a year on these imports. It is also the world's biggest importer of fat-filled milk powder from Europe-- a cheap milk lookalike that is made with a mix of milk powders and palm oil that has nearly quadrupled in exports from Europe over the past decade.[3] FrieslandCampina, which brings in huge quantities of subsidised powdered milk from its dairy plants in Europe, controls about 75% of the Nigerian dairy market, with just five companies controlling 99% of it.
Yet Nigeria has one of the largest cattle herds in the world and has a long tradition of local dairy production. By all accounts, things should be similar to Kenya, where herders and small farmers with local breeds of cows supply about 90% of the milk consumed in the country through networks of small-scale traders. The difference is that Kenya has long protected its local dairies with tariffs on imports, while Nigeria opened its market in the 1980s under structural adjustment programmes, and the government has made no real efforts to reign in the import flows ever since.

FrieslandCampina, headquartered in the Netherlands, is in 38 countries and distributes to 100 countries. In every country, they operate as a different company with different brands. It has operated as Bonnet Rouge in West Africa; in Nigeria as Peak and Three Crowns and as WamCo. In Ethiopia, they are the largest investors in the dairy sector operating as Holland Dairy. Together with Syngenta and other agro-chemical companies, Friesland Campina, hopes to be the leader by 2024 in the marketing of Eubiotics – a USD 4 billion industry. Photo : FrieslandCampina DMV plant in The Netherlands, 2014. Wikimedia Commons; User J187B

Selling milk by the roadside in Borana, Kenya. Photo: Masresha Taye
Contrast this situation with that of Uganda, where a 60% tariff protects small dairy farmers on dairy imports.[22] Today smallholder dairies, composed of small-scale cattle farmers and herders and small-scale dairy vendors and processors, supply 80% of the milk consumed in Uganda. With regional tariffs keeping milk powder imports out of East Africa, small dairy farmers in Uganda have been able to effectively supply a surge in demand over the past two decades, and they have done so with indigenous cattle breeds and traditional farming practices.[23] The country's few dairy companies have, on several occasions, tried to use their political connections to get laws passed to undermine this so-called "informal sector", but farmers and small vendors have allied to stop them. Nationwide protests of farmers and vendors forced the government to back away from a ban on raw milk sales in both 2007 and 2014.[24]
Africa's rich livestock diversity
Of the 222 million cattle that provide Africans with dairy and meat, most are owned by smallholder farmers and pastoralists.[25] This cattle population is highly diverse. There are at least 150 indigenous cattle breeds that have been identified on the African continent, and many more remain uncategorised.[26]
Cattle herding in different countries is carried out by specific tribes, such as the Banyankole in Uganda, Masaai in Kenya and Tanzania, and the Fulani throughout the Sahel and West Africa. They each have their own local breeds, like the famous Ankole long-horned cattle found in and around Uganda or the humped Zebu cattle that are kept by Fulani herders, of which there are many of different varieties adapted to the local geographies where they are grazed.[27]
Many of these groups are nomadic herders who move for long distances and periods of time, looking for feed and water for their animals. As such, their cattle breeds are adapted to the local conditions like the high temperatures, drought, the long distances between sources of grass and water and the various endemic diseases, as well as to the needs and cultures of those who depend on them.[28] 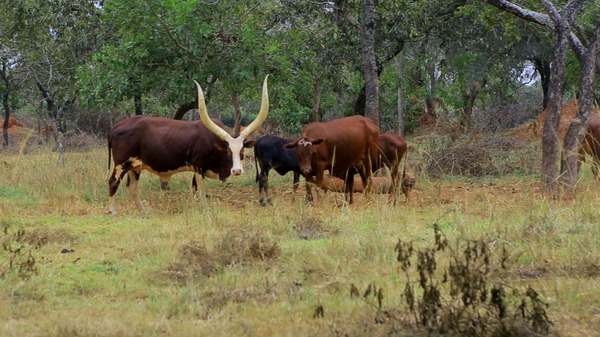 In recent years, farmers and even pastoralists have been pushed to adopt "high-yielding" breeds of cows, often crosses between the cows used on industrial dairy farms in Europe and local breeds. These new breeds are offered to women, particularly widows and single mothers in the rural areas of the countries where organisations like Send A Cow and Heifer International operate. By their nature, these foreign breeds are costly and come with onerous instructions for care, health and reproduction, for which the farmers have to take on debt to purchase costly veterinary products, shelters and artificial insemination.

Although cattle dominate Africa's dairy sector, sheep, camels and goats are also important to dairy production, especially in certain areas of the continent. Exact figures are hard to come by, it is estimated that Africa is home to 27% of global sheep and 32% of global goat populations, and about 20% of global cattle.[29]
Many herders and farmers in Africa prefer small ruminants because they tend to involve lower costs and to be easier to manage than cattle. This is especially true for goats, known as the “poor person's cow”, which have long been raised on the continent.[30] [31]
Dairy as a central part of the struggle for food sovereignty
There is no justification for the billions of dollars that exit Africa every year to pay for dairy imports. Dairy can and should be produced locally. As can be seen in Uganda, and neighbouring Kenya, there is one simple, effective measure that can be immediately taken: a stop on imports of powdered milk.
There are several options that African governments can take immediately to put the brakes on imports of powdered milk if there is political will. But many African governments are going in the opposite direction, in negotiations with Europe for the Economic Partnership Agreements or even in Africa's own Continental Free Trade Agreement (AfCFTA), which undercut the possibilities their countries have to protect local dairy production. The governments of the big surplus milk-producing countries in Europe, North America and Australia/New Zealand are also maintaining their relentless pressure on Africa to absorb more dairy from their corporations, even as these policies leave their own dairy farmers in crisis. 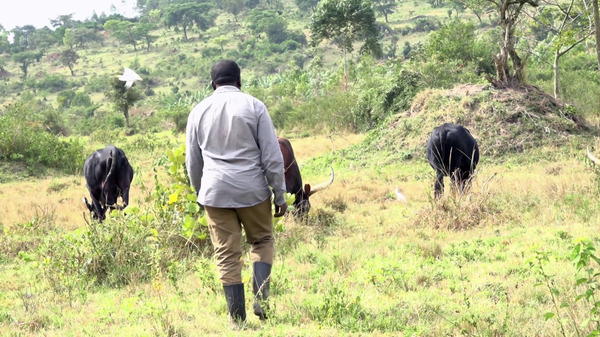