Oakland / Dakar / Paris – As US-based holding company African Agriculture Inc. (AAGR) has filed an initial public offering to fund a large-scale agribusiness project in the northern region of Saint-Louis in Senegal, local communities are demanding the company return their land stolen over a decade ago.
In 2012, Senhuile obtained 20,000 hectares of land for 50 years for an agribusiness venture following the declassification of part of the Ndiaël Nature Reserve. In the years since, communities who have been living in Ndiaël for generations have opposed the project and advocated for the return of their legitimate land. The Oakland Institute and GRAIN have extensively documented the impact of the project.
“The 20,000-hectare concession has had a devastating impact on our people. It was granted against the will and without the consent of our communities, which have used this land for generations for wood, food, medicinal plants, and most crucially for pasture, given that we are agro-pastoralists whose livelihoods depend on livestock,” said Elhadji Samba Sow on behalf of the Collectif pour la Défense du Ndiaël, representing 37 villages and over 10,000 people. The Senhuile project additionally blocked passage along customary routes between villages and water sources while the irrigation canals caused the death of at least three children by drowning.
On May 30, 2022, the Collectif pour la Défense du Ndiaël sent a letter to AAGR Chairman and CEO Alan Kessler, demanding the immediate return of their land as well as adequate remediation and compensation for the harm and economic loss inflicted upon communities by ten years of occupation of their land by the project. In his response to the letter, Kessler ignored the communities’ demands and instead highlighted a number of actions by his company in their favour, including contributions for the celebration of Ramadan and Eid holidays and distribution of fodder to a few herders. 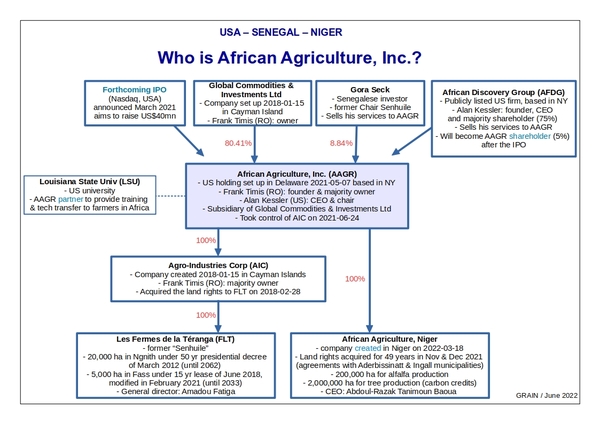 In 2018, AAGR purchased the Senhuile concession – now renamed Les Fermes de la Teranga (LFT) – from its Italian owners for US$7.9 million. LFT plans to establish a commercial farming business on the concession that will initially focus on producing and selling alfalfa for cattle feed in Senegal and for export. AAGR filed an initial public offering investment prospectus in March 2022 and seeks to raise US$40 million to run its operations.
AAGR markets its proximity to the Lac De Guiers and emphasizes low water costs as a “competitive advantage” for their operations, which will require “the use of large volumes of water.” Critically missing from their prospectus is the fact that the Lac De Guiers is the only water reservoir in the lower Senegal River basin, supplying a significant share of water to several cities -– including 65 percent of the water consumed in Dakar – and rural communities in Ndiaël during the prolonged dry season.
“In the IPO filings, AAGR makes no mention of the communities’ opposition to the project and their more than 10-year long struggle to reclaim their land,” said Oakland Institute Policy Director Frédéric Mousseau. “It is critical that the SEC and potential investors are made aware that the project is being established on land grabbed from local communities,” he concluded.
"This project, which really started back in 2009 in Fanaye, has been marred with controversy," pointed out Renée Vellvé of GRAIN. "People have been killed, livelihoods disrupted, company officials have gone to jail and nothing serious has been produced on the farm. This endless cycle of injustice has to stop."
Romanian mining and energy tycoon Frank Timis owns 80 percent of AAGR while Senegalese investor Gora Seck owns 9 percent. Timis is a controversial figure due to his involvement in several projects, including a high-level corruption scandal over an oil contract in Senegal, in which the Senegalese president’s brother was implicated.
In their IPO filings, AAGR say they expect to finalize an agreement with the Louisiana State University AgCenter, “to train, develop and transfer educational skills to local communities” in Africa. AAGR also indicate plans for a major carbon credit tree-planting project in Niger, claiming to have reached agreements with the local governments of Ingall and Aderbissinatt to lease over 2.2 million hectares of land.
“For our communities, this is a clear and ongoing case of land grabbing,” concluded Samba Sow. “Alan Kessler and his company are aware of our demand for the return of our land but have chosen to sweep our lives and resistance under the rug. But we will not be silenced,” he concluded.
Media Contacts:
- Frédéric Mousseau, The Oakland Institute, [email protected], +1 (510) 512-5458
- Elhadji Samba Sow "Ardo", Collectif pour la Défense des terres du Ndiaël, [email protected], +221 776 286 798
- Renée Vellvé, GRAIN, [email protected], +33675073468
Note to Editors:
Two additional resources are available: a fact sheet on African Agriculture Inc and a graph showing the structure of the company and its projects.