by GRAIN | 27 May 2022 Supermarket Watch Asia
Share this article

Supermarket Asia bulletin #26 - May 2022
Editorial
Heat waves and heavier rains: How the climate crisis affects fresh market traders and street vendors
Record high heatwaves and heavier rains across Asia and other parts of the world in the first few months of this year have led to much harsher conditions for street vendors and fresh market traders. The extreme weather has made it almost impossible to work and has spoiled fresh produce, making it useless for selling. The situation has been disastrous for the incomes of these vendors.
Scorching heat and unseasonal rains reduce the length of time that these traders can work. As heatwaves become more frequent, experts say heat-exposed work will become dangerous during the hottest hours of the day. This is not just a matter of public health and safety, but also a grave economic issue for many countries in Asia, and particularly for agricultural workers or small traders. A report shows that rising temperatures were largely responsible for a 30 per cent decline in income among South Asian women working in the informal sector, such as street vendors.
For vendors that sell fresh produce like fruit, vegetables or fish, it is a real challenge to keep it fresh under the extreme heats that have afflicted many cities in Asia between March and May this year. The traders reportedly needed more water and ice to keep the produce fresh and unspoiled under the heat, even as the price of ice doubled. This not only affects the traders’ income but also the food availability for consumers, particularly for low-income communities that rely on fresh markets and small food vendors.
Meanwhile, in the other part of the world, South African street vendors have been trying to raise funds to help thousands of people, including many street vendors, who lost their homes, families and livelihoods from a deadly flood that hit part of the country in March this year.
As the world faces the third global food crisis in the last 15 years, with food prices reaching all-time highs in April 2022, neither climate experts nor decision makers seems to be aware of the aggravated impacts of climate change on informal workers within the food web like market traders, street vendors or home-based food producers. Market traders and street vendors help fill the last mile for sale of small products, connecting small producers and farmers to low- and middle-income consumers. Therefore, their presence and their ability to continue working in the face of the climate crisis need to be taken into account.
Ensuring more green public spaces that are inclusive and accessible to vendors and others, providing free and clean drinking water, and constructing shelters in urban areas to temporarily escape heat or rain: these are some concrete proposals that street vendors and market traders have themselves put forward. It is time that their voices are heard.
Head banner photo: Food hawkers in Bali face increasing rain intensity
Across the region
May Day 2022 - Busting myths about street vendors 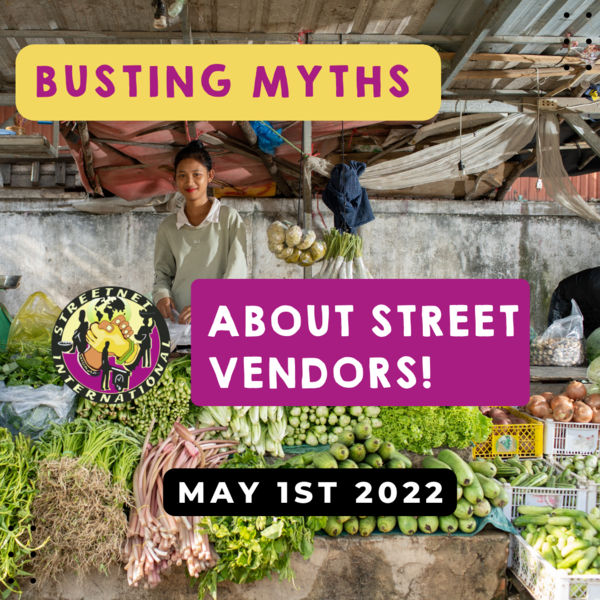 Suthep Kritsanavarin/Oxfam
Oxfam has now published its fourth Supermarket Scorecard, which includes supermarkets from the UK, the Netherlands and Germany. For the first time, four supermarkets have scored 55% or above in the research analysis.
Since 2018, Oxfam has been investigating the biggest supermarkets’ policies to see whether they are protecting the people who produce our food or leaving workers’ rights on the shelf.
What was first discovered was outrageous: not one of the supermarkets had been doing enough to ensure basic human rights for the thousands of people who put food into our shops and onto our tables. Some workers go to work and produce food all day but go home hungry.
Over the past four years since the first challenge, most of the supermarkets have started to take some action on human rights in their global food supply chains: taking steps to adopt a human rights approach with the goal to end the suffering of the women and men who produce our food.
However, while some are doing better than others, all supermarkets still lack sufficient policies and practices to properly protect the people who produce our food. Labour rights violations remain systemic and pervasive, and the COVID-19 pandemic has exacerbated inequality in global food supply chains. While supermarket owners and shareholders continue to make millions in profit, workers - especially women - have seen their incomes stagnate or even fall.
The full report: Mind the gap: Oxfams fourth supermarket scorecard explain
From the news
Fishy fraudulence: Supermarkets identified as main source of seafood adulteration in Singapore
Pearly Neo, Food Navigator
Supermarket-bought imported seafood has been identified as the main source of seafood adulteration in Singapore. Singapore is heavily reliant on seafood as a protein and nutrition source, with an average consumption of 22kg per capita, but according to a recent Yale-NUS (National University of Singapore) study, over a quarter of this protein source could be fraudulently labelled and a potential threat to public health. According to the Singapore Department of Statistics, as of 2021 Singapore imports some 96% of its seafood products.
Belgian farmers outraged at ‘systematic’ farmland acquisition by supermarket chain Colruyt
The Brussels Time
Around 150 farmers demonstrated against the supermarket chain Colruyt, which they claim is buying up too much farmland in Belgium. A recent study published by investigative media Apache suggests that Colruyt has bought up some 175 hectares of farmland in Belgium in recent years.
“Land is becoming scarce and unaffordable. We fear that in the long run there will only be expensive and temporary rental contracts with big players like Colruyt, which would make it impossible to continue farming,” says Wim Moyaert, coordinator of the farmers movement ‘Boerenforum’.
Billionaire tech pioneer Nilekani takes on Amazon, Walmart in India
Business Standard
India has become a battlefield for some global retail behemoths that are either shut out of China or are struggling to compete with local rivals there. A high-profile mogul, Nandan Nilekani built an open technology network that seeks to level the playing field for small merchants. But its unspoken objective is to eventually curb the powers of Amazon.com Inc. and Walmart Inc.-owned Flipkart, whose online domination has alarmed small merchants and the millions of local mom-and-pop stores, called kirana, that form the nation’s retail backbone.
South Korea massive labor uprising
Minju Bae, In This Time
South Korean workers, farmers and the urban poor, battered by the pandemic, are demanding labor protections and structural reforms, according to an interview with representatives of labour, farmers, and street vendors groups from Korean Confederation of Trade Unions, National Parcel Delivery Workers’ Solidarity Union, Korean Peasants League, Action Solidarity for Liberation of the Poor and Korea Democratic Street Vendors Confederation.
With the surge of irregular work (or precarious work) through sub-contracting and special work statuses the unions bring forward some demands which include: to abolish irregular work, a just economic transition in the context of climate crisis and digital transformation, stop governments from cracking down on street vendors and making street vending illegal, recognize that street vendors are critical to the economy and society, demand controlled prices for agricultural products to cover minimum production costs, abolition of unfair free trade agreements, and the realization of food sovereignty.
Supermarket watch Asia is a quarterly email bulletin for social movements about developments in food retail and distribution in Asia produced by GRAIN. Click here to subscribe.