Murder, land grabbing, indentured labour. These are some of the allegations that have been brought forward by communities in the DR Congo against the Canadian company, Feronia Inc, a company that received over US$150 million in financing from European development banks.
Most of these troubling allegations concern the company's vast oil palm plantations in Équateur and Tshopo Provinces that it bought from Unilever in 2009. But Feronia's initial years in the DRC also involved a large-scale rice farm and mill in the Bas-Congo that the company said would eventually save the Congo from its dependence on food imports.
By 2016, Feronia had sunk at least US$14 million into its rice operations before suddenly "discontinuing" its entire "arable division" in 2017 without explanation. A few years later, Feronia filed for bankruptcy and its oil palm plantations were handed over to a private equity fund in late 2020.
It has long been suspected that Feronia's arable operations were a front to channel funds to a high-level Congolese politician who facilitated Feronia's entry into the DRC. Allegations of possible corruption were well known when the UK's development bank, the CDC Group, and other development banks began financing Feronia. The company and the development banks denied these allegations and no serious investigation was ever undertaken.
New information discussed below provides further reason to suspect that Feronia's arable division may have been engaged in corrupt activities while the company was receiving funds from development banks. Will this be enough to launch a proper investigation of how development bank financing of Feronia may have contributed to corruption in the DRC?
Feronia's deep involvement with former President Joseph Kabila's closest advisor
When Feronia acquired Unilever’s oil palm plantation company PHC in 2009, it did so through a Cayman Islands company called Feronia JCA Limited. The "JCA" was in reference to Jean Collette Afrique SARL, a company entirely owned by Kikaya Bin Karubi, a high level politician, very close to the DRC President Joseph Kabila. He served as Kabila's Minister of Information from the time Kabila took power in 2001 until he was named Ambassador to the UK in 2009. In 2014 he was summoned back to Kinshasa where he became Chief Advisor to the President until Kabila's fall from power in January 2019. 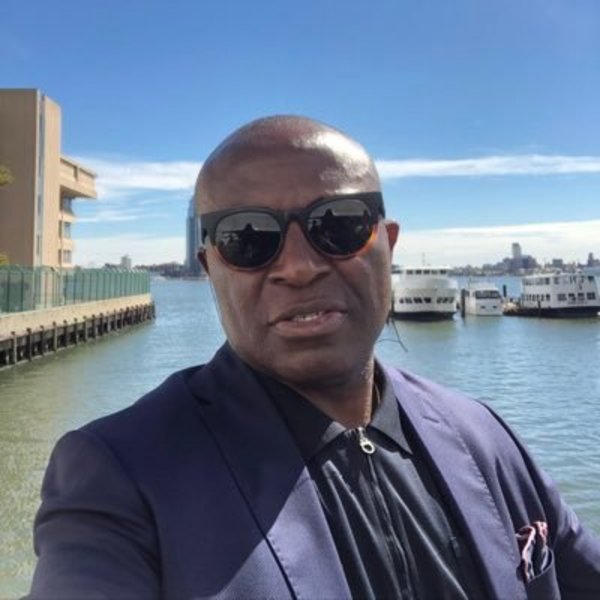 Through his company, Jean Collette Afrique, Bin Karubi held 20% of Cayman Islands-based Feronia JCA Limited. But only a year after Feronia's entry into the DRC, Feronia claims that it bought back Bin Karubi's 20% as well as a farm he owned just outside of Kinshasa, in Kasangulu, for a total of around US$2.2 million. He was also paid US$120,000 per year as rent for the use of his home in Kinshasa (while he was in London as the Ambassador) as well as fees for his service on Feronia's Board of Directors.

In 2012, Feronia claimed in a press release that it was growing mango, avocado and pineapple at this farm in Kasangulu but the farm was never mentioned in any of the company's financial reports or website nor was it part of Feronia Inc's bankruptcy proceedings in 2020. The farm, which the company says it acquired for around US$600,000, simply vanished from Feronia's books.
What Feronia referred to as its “arable” farming division revolved around another, larger farm near the town of Kimpese in the Bas-Congo region. This arable division was structured through Feronia's Kinshasa subsidiary, Feronia JCA Ltd SPRL, which oversaw three other DRC subsidiaries: Feronia PEK (the Kimpese farming company), Kimpese Agro Industries (the crop processing company), and Bas-Congo Ferti (which handled the purchase of fertilisers for Feronia's arable and palm oil divisions). 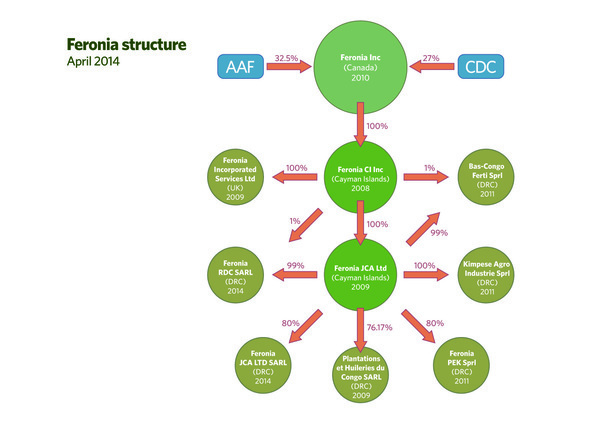 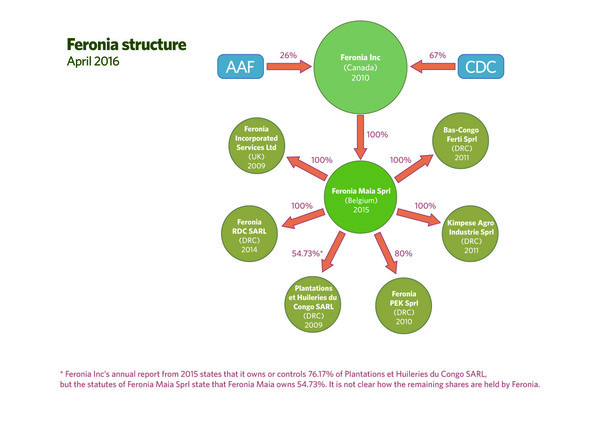 The Feronia PEK farming business was 20% owned by Plantations et Elevages de Kitomesa, a local company that appears to be owned by the Tuluka family (a.k.a Yaya Groupe). Feronia's company reports indicate that Feronia acquired its 10,000 ha farm around Kimpese from the owners of this company, who were given a 20% share of Feronia PEK in return.
Company documents also show that Kinshasa-based Feronia JCA Ltd SPRL was managed by former Unilever plantation manager Raymond Batanga and was 20% owned by Bin Karubi until at least February 2014, when the company was disbanded and fused into the larger Feronia structure. This company was thus still in operation well after the CDC Group and the African Agriculture Fund (a Mauritius-fund managed by Phatisa and owned by numerous development banks) began investing in Feronia.
An investigation into company records for Feronia JCA Ltd SPRL obtained from the Kinshasa business registry uncovered numerous dubious expenditures, including unspecified payments for "services" and a second rental payment of around US$150,000 per year to Bin Karubi for an apartment at a different Kinshasa address than that of his house. Feronia made at least US$28 million in loans through this company and paid millions of dollars for "services" for reasons that were not made clear in Feronia Inc’s financial reports. When questions were put to Feronia about its loans to Feronia JCA Ltd SPRL by a team of German journalists, its CEO claimed that they were spent mainly on the construction of a rice mill in Kimpese and the preparation of the farmland undertaken by Feronia PEK. According to him, at least US$8.6 million was spent preparing the land and US$5.6 million building the rice mill.
Feronia made its first announcement of rice production at the Kimpese farm in 2011, saying that it had harvested on 1,200 ha but that yields were low. In 2012, it harvested rice on 305 ha and planted 140 ha of beans. That year it also completed construction of its rice storage and mill facility in Kimpese. The company proudly displayed images of the bags of rice it was selling with the Feronia logo on its website. 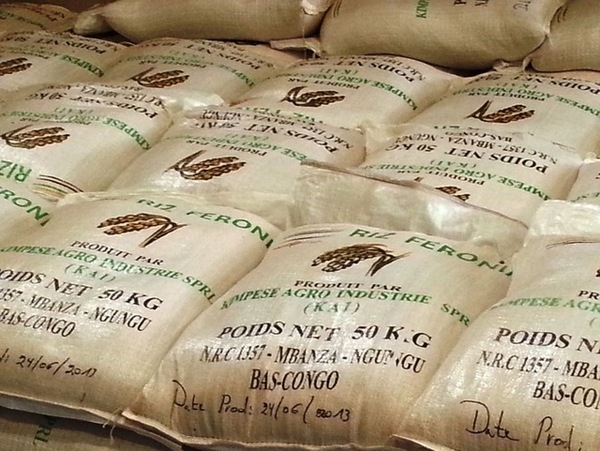 Bags of Feronia's rice
In 2014, Feronia declared that the assets of its arable division were worth US$7 million, and heavy spending on the division pushed losses to US$4.9 million for the year. But it was at this point that Feronia's enthusiasm for its arable division suddenly began to wane. In its 2015 annual report, Feronia stated that it had entered an agreement with an unnamed “partner” to conduct a 2 year feasibility study of its arable division and an "impairment test", which revealed a charge of US$3.5 million. The claimed losses on its books climbed to US$5.9 million, mainly because of this impairment charge.
In the 2017 annual report, Feronia booked another $2 million in losses for its arable division and announced that, following the feasibility study, it was discontinuing its arable operations. No explanation was given as to why. So much for what Feronia's CEO once called "one of the largest arable farming expansion programmes undertaken anywhere".
Enter Luc Gérard
Information obtained from the twitter account of Belgian-Congolese businessman Luc Gerard Nyafé suggests that his company, Strategos Plantations, became associated with the Kimpese rice mill in 2017 or earlier (see Box 1: Strategos Group). His tweets indicate that Strategos acquired the mill at some point prior to 2017 and began producing its own rice by 2018. It is not clear if Strategos also acquired the Kimpese farm. Nor is it known if the takeover of the rice mill took place before Feronia’s oil palm division received a US$49 million loan from DEG (Germany), FMO (Netherlands), BIO (Belgium) and other development banks. 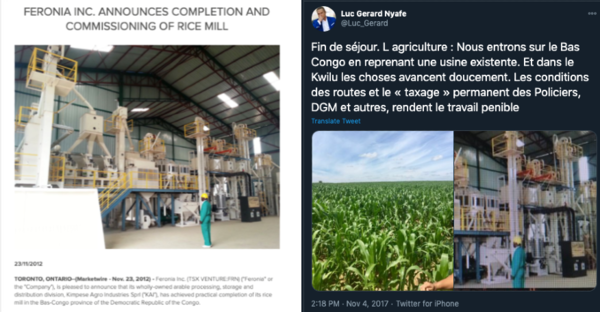 Feronia's website from 2012 announcing the completion of the rice mill and the tweet by Luc Gérard from Nov 4, 2017: “End of stay. Agriculture: We are entering the Bas Congo by taking over an existing factory. And in Kwilu things are moving slowly. The road conditions and the permanent "taxing" of the Policemen, DMG and others, make the work difficult.”

GRAIN asked Strategos for clarification but they refused to comment. This was their response: "Please be informed that even though Strategos Plantations has had commercial relations with Feronia in the past, said relationships have terminated. Note further that we are not at privity (sic) to disclose the scope and/or extent of said business affairs due to confidentiality concerns."

What is clear is that Strategos acquired a mill reportedly worth at least US$8 million that was once owned by Feronia, without Feronia having registered any amounts for a sale of the mill in its accounts.
Strategos Group
The Strategos Group (registered in the tax haven of Delaware, US) is owned by the Belgian/Congolese businessman Luc Gerard Nyafé. He made his fortune in Colombia, where he teamed up with some well-connected local financial players to start a private equity fund (Tribeca) that got access to hundreds of millions of dollars from Colombia's state pension fund. He also received a Master's in Security and Defence from the Colombian War School. Gerard soon got into the mining sector, as well as privatised health care, and in 2015 he turned his sites to the DRC.
Gerard’s father was a coffee plantation owner in the DRC, and Gerard seems to have made some early investments in agribusiness in the DRC in the 1990s. But in 2015, he came back with much more force, founding the company Strategos Plantations, and taking over two of Unilever’s big plantation concessions and two farming operations (including, it seems, Feronia’s in Kimpese). 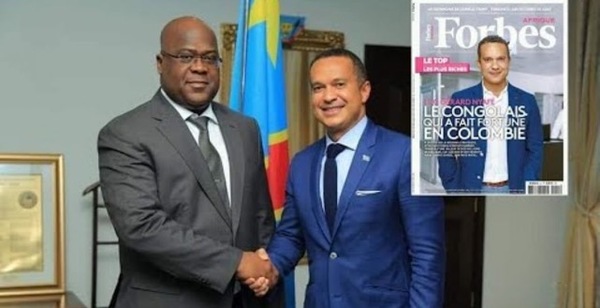 Luc Gérard on the cover of Forbes Africa; Luc Gérard Nyafé shaking hands with DRC President Felix Tshisekedi
Then, in 2018, with the election of Felix Tshisekedi, Gerard made a much bigger play. Tshisekedi made him an ambassador at large and one of his main advisors. He was handed the lucrative Maluku Special Economic Zone. He also formed a mining company, Compagnie des minerais strategiques (CMS) in Kinshasa in June 2019, to pursue the geological data for 17 mining projects in the DRC and Mali that he acquired in December 2018. In December 2020, Gérard was elected president of the Parti d'Union Républicaine, a recently formed national political party.
In 2020, Gérard claimed that Strategos sold the mill and its rice operations to Bio Agro Business (BAB), a Congolese company deeply involved in the agricultural projects of President Felix Tshisekedi. One of BAB’s team leaders is Raymond Batanga (the former manager of Feronia JCA Ltd SPRL). Another key player is the Italian agronomist Giovanni Mazzotti, who previously worked for the scandal ridden Senhuile project in Senegal. 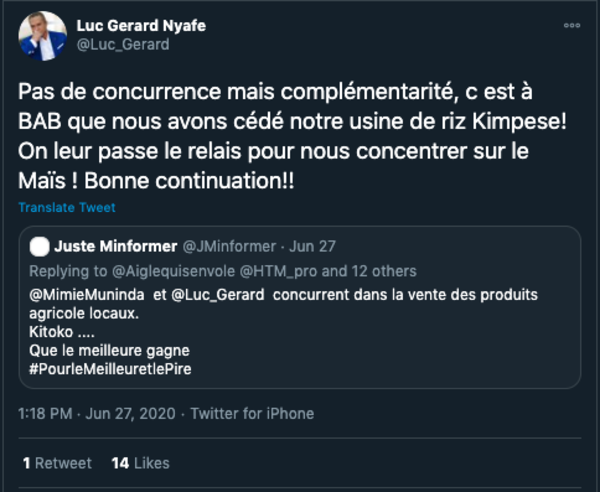 Tweet from Luc Gérard on June 27, 2020: “No competition but complementarity, it is to BAB that we sold our Kimpese rice factory! We are handing it over to them to focus on corn!”

BAB has a distribution agreement for its rice with EGAL Sprl, a Congolese company that was accused of facilitating the disappearance of millions of dollars into bank accounts of former President Kabila's cronies through a government food security programme that was supposed to provide people with cheap imported foods. 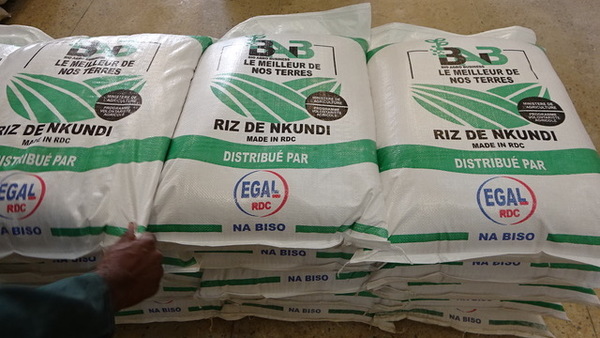 Bags of rice produced by BAB and distributed by EGAL Sprl
Development bank policies on corruption are empty promises
It is a shame that no thorough investigation has ever been made into how development banks may have facilitated corruption in their financing of Feronia. The fact that development banks were investing in a company operating from the Cayman Islands that was part owned by President Kabila's right hand man, someone who has publicly justified corruption among DRC politicians, should have been enough of a red light on the corruption index.
Feronia may now be bankrupt and its Congo oil palm plantations in the hands of a new private equity player, who seems even more inept and ruthless than Feronia, but someone needs to be held to account. If "development finance" means anything, that accountability must rest with the development banks that bankrolled Feronia and the governments that are supposed to oversee them.