2020 Report on Climate Change in Argentina. Who dares to call out agribusiness?

On 31 December 2020, Argentina published its official report on climate change (Second Nationally Determined Contribution on Climate Change). It is important to analyse this document regarding both its assessments and its proposals.1
We can infer that although the emissions data are from 2016, they remain the same, to say the least. In relation to the contributions of the different sub-sectors that relate directly to the impact of agribusiness emissions, we see:
- Land use change and forestry account for 9.8% of emissions, clearly the result of expanding agricultural or forestry monocultures. An example of this is the deforestation of the Argentine Chaco region – one of the most affect areas, which saw the annual destruction of around 300,000 hectares between 2010 and 2015. More than 80% of the Argentine Chaco was converted into land for grazing and agricultural production. Between 1999 and 2014, the surface area used for soybean production increased by 85%.”2
- Livestock farming accounts for 21.6% of emissions, primarily through industrial production systems. For example, 85% of beef is produced in feedlots.3
- Agriculture accounts for 5.8% of emissions. This is undoubtedly linked to the genetically modified industrial monocultures that cover a large part of the country’s agricultural lands. According to the International Service for the Acquisition of Agri-biotech Applications (ISAAA), in 2018, 100% of soybeans and 78% of maize grown in the country were genetically modified. This makes it the third largest area with genetically modified plantations in the world (some 23.9 million hectares, 12% of the world's surface area).
Even the official 2017 national greenhouse gas inventory indicates that 39% of emissions come from agriculture, livestock and other land uses.4
The emissions listed above are clearly linked to agribusiness, and are one piece of the puzzle. We must also add the other components that come from the industrial chain of producing agricultural commodities, from the pre-production stage to transport (since grain and livestock transport have a significant contribution in this regard). We must also include – even though it is not taken into account in the government’s report – the contribution of grain transport to its final destination (primarily China and the EU), as well as the refrigeration of meat for export, as they too have a significant contribution to greenhouse gas emissions.
The United Nations Intergovernmental Panel on Climate Change (IPCC) published its Special Report on Climate Change and Land in 2019, which broadens the strict focus on forests and agriculture. It counts between 21% and 37% of worldwide emissions coming from the entire global agro-food chain, including emissions before and after the productive activity, taking into account machinery, fertilizers, transport, storage, processing, packaging, etc.5
In 2014, GRAIN estimated that between 44% and 57% of all greenhouse gas emissions worldwide come from the agro-industrial commodity production system: 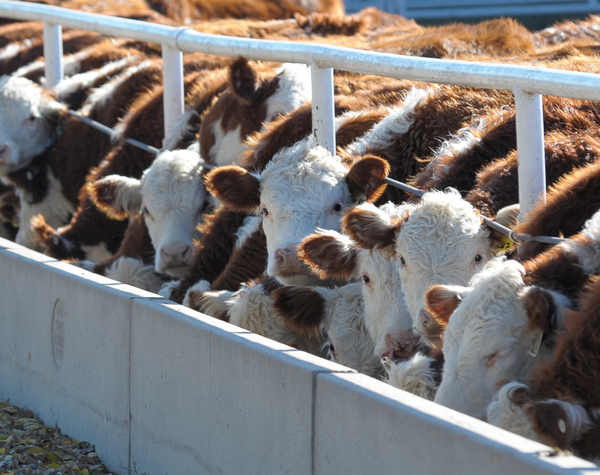 Thus, with a minimum baseline of 39% of emissions, we can see that the official government figures are close to GRAIN’s research that shows the climate impacts of all the stages of the industrial model of producing commodities, including its intrinsic dependence on fossil fuels. We can also see the very high impact of industrial livestock farming: “The world’s biggest meat and dairy companies could surpass ExxonMobil, Shell and BP as the world’s biggest climate polluters within the next few decades. At a time when the planet must dramatically reduce its greenhouse gas emissions, these global animal protein giants are driving consumption by ramping up production and exports.”7

However, when we analyse the government’s proposals to respond to the climate crisis, we find that there is no approach to tackle the problem and that, on the contrary (as in most cases around the world), they put forward false solutions that will only aggravate existing problems.
What follows is an analysis of some of the false solutions that are included in the official document:
1. The objective framing the proposals is that “growth in production by 2030 will come from a structural change towards sustainable production, consisting of active policies to promote economic recovery focusing on promoting exports, expanding the domestic market, and increasing productivity and efficiency through measures that foster creativity and innovation.” Inserting “sustainable” production in the discourse does not appear to match the focus areas that follow – promoting exports, increasing productivity, and fostering innovation. Rather, as we will see later, it seems more like greenwashing to avoid any significant changes.
2. In the area of agriculture, livestock, fishing, and forestry, the official report states, “agricultural and agro-industrial production will continue to represent one of the most significant contributions to the GDP, as a source of employment and for generating foreign currency. The increase in total grain production by 2030 will come from higher agricultural yields and will not involve a significant increase in the actual agricultural surface. To this end, public policy instruments will be put in place to create incentives for innovative agricultural intensification, promoting the implementation of new technologies and practices.” Once again, they present a proposal for increasing production that is based on assumptions and that does not question the model. Without a doubt, and as has taken place since the introduction of genetically modified soybeans in Argentina, the agricultural surface area will continue to grow at the cost of delicate and fragile ecosystems. The information collected in the Atlas of Transgenic Agribusiness in the Southern Cone is conclusive: 5.6 million hectares of forestland destroyed between 1998 and 2017, and used of glyphosate increased from 35 million kilos/litres in 1997 to 240 million kilos/litres in 2017, with a peak of 20.5 million hectares of genetically modified soybean grown in 2015.8
The “innovative agricultural intensification” and the “new technologies” will materialize - as is already proposed - with the imposition of technological packages like Bill Gates’ Agtech proposal for our country, which will only increase corporate control of our agriculture without altering its impact on the climate crisis one bit. 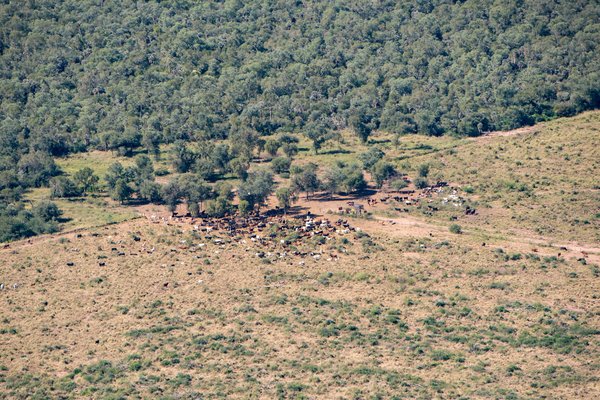 Deforestation in northern Argentina. Source: Greenpeace
3. Regarding livestock, the proposal is “an increase in meat production to supply the domestic market and improve export performance, through a two-pronged mechanism: on the one hand, an increase in herd productivity and, on the other hand, an increase in the volume of meat produced per animal slaughtered.” To put it simply, the proposal is to continue with the industrial livestock model, feedlots, and industrial pig and poultry farming, which will continue to emit increasing amounts of greenhouse gases. The proposed agreement with China to build pig mega-factories is a clear example of what they are aiming to implement.
4. Additionally, they foresee that “the surface area of tree plantations will increase by 2030 through the broadening of current regimes to promote them.” This is what elsewhere in the document they call implanted forests, reinforcing a very serious falsehood. This increase in tree plantations will undoubtedly be one more driver of deforestation in our territory, and one more contributor to promoting false solutions like the REDD+ market mechanisms that Argentina proposes to use.
5. Lastly, the chapter on foreign relations states, “international trade contributes to development and to creating employment. Therefore, we must avoid adopting trade barriers through climate change objectives.” This statement of faith in Free Trade is in direct contradiction to the possibility of ending greenhouse emissions, as has been shown by many studies. The recent environmental audit of the proposed Mercosur-EU Agreement has provided clear data on this matter. It shows that across the region, emissions from increased bilateral trade in eight key farm products are expected to go up by one-third (34%).9
We are convinced that real solutions will come hand in hand with a profound change in the agro-food system. This is how we can make a real contribution to reducing greenhouse gas emissions nationally, and do our part to address this global issue. Additionally, we can address the other serious problems presented by agribusiness: increasing hunger, increasing deforestation, and the contaminating effects of toxic agrochemicals on peoples and the environment, among others.
Already in 2019, the First Forum for a Peoples’ Sovereign Agrarian Agenda proposed the themes on which a new agrarian model must focus: “We want Argentina with food sovereignty; we opt for a different production model, one that is agroecological, not extractive, healthy; in socially, economically, and culturally integrated territories that constitute a sustainable habitat for all. We believe in the right to food that is diverse and high quality for everyone. We affirm the strategic nature of our proposal, which is a central pillar of a national liberation agenda to confront the colonial agenda expressed by concentrated capital and the actions/omissions of those who exercise the power of the State.”10 This is a long-standing debt that is yet to be heard and that keeps peoples mobilized in order to achieve it.
1Government of Argentina, Contribución determinada a nivel nacional sobre cambio climático, 31 December 2020 https://www.argentina.gob.ar/ambiente/cambio-climatico/contribucion-nacional
2GRAIN, “Cercas digitales: cercamiento financiero de las tierras agrícolas en América del Sur,” 22 September 2020, https://grain.org/e/6530
3“Feedlot: el modelo argentino a contramano del mundo”, Valor Carne, 10-12-2020, https://www.valorcarne.com.ar/feedlot-el-modelo-argentino-a-contramano-del-mundo/
4Inventario Nacional de Gases de Efecto Invernadero, 2017, https://inventariogei.ambiente.gob.ar/
5GRAIN and Grupo carta de Belém, “Clima, tierra y soberanía: narrativas climáticas sobre los territorios del sur global”, 28 November 2019, https://grain.org/e/6369
6GRAIN, “Food sovereignty: Five steps to cool the planet and feed its people”, 5 December 2014, https://www.grain.org/en/article/5102-food-sovereignty-five-steps-to-cool-the-planet-and-feed-its-people
7GRAIN and IATP, “Emissions impossible: How big meat and dairy are heating up the planet”, 18 July 2018, https://www.grain.org/en/article/5976-emissions-impossible-how-big-meat-and-dairy-are-heating-up-the-planet
8Acción por la Biodiversidad, Atlas del agronegocio transgénico en el Cono Sur, 2020, http://www.biodiversidadla.org/Atlas
9GRAIN, “EU-Mercosur trade deal will intensify the climate crisis from agriculture”, 25 November 2019, https://www.grain.org/en/article/6355-eu-mercosur-trade-deal-will-intensify-the-climate-crisis-from-agriculture
10First forum for a peoples’ sovereign agrarian agenda (Primer Foro por un Programa Agrario Soberano y Popular), 7 - 8 May 2019, http://foroagrario.org/documentos/