Buriti trees in the community of Baixão Fechado in the municipality of
Santa Filomena, state of Piauí. Photo: Daniela Stefano
Brazil's land agency and a state court have determined that pension fund manager TIAA and Harvard University’s endowment fund illegally acquired hundreds of thousands of hectares of farmlands in Brazil’s ecologically sensitive Cerrado region. The positions issued by the country’s federal land agency (the National Institute for Agrarian Reform - INCRA) and the state court of Bahia are detailed in a new report by AATR, Rede Social and GRAIN that also shows how fires are once again ravaging large areas of forests on TIAA and Harvard's Brazilian farms.
TIAA and Harvard are the largest foreign buyers of farmland in Brazil. Since 2008, they have amassed a combined total of around 750,000 hectares, most of it in the Northeastern part of Brazil, within the country’s biodiverse Cerrado savannah region. During this period, Rede Social, AATR, GRAIN and other organisations have produced numerous investigative reports documenting how TIAA and Harvard’s farmland deals in Brazil are connected to illegal land grabbing, violent displacement of local rural communities, deforestation and other social and environmental harms in the region. Rede Social and GRAIN have also issued reports detailing how TIAA and Harvard have used opaque corporate structures, running through offshore jurisdictions, to conceal and evade Brazilian legislation restricting foreign ownership of farmland. Parnaíba River in the quilombola community Artur Passos, in the municipality of Jerumenha, state of Piauí. Photo: Daniela Stefano

These concerns were brought to the attention of Brazil’s federal agency tasked with the oversight of rural land matters, the Instituto Nacional de Colonização e Reforma Agrária (INCRA). However, it was only recently that we gained access to a position document on TIAA’s land deals that was issued by the INCRA division responsible for the supervision and oversight of land acquisitions by foreign entities in May 2019.
INCRA's assessment details how all of the lands acquired by TIAA after 2010 were done in violation of Brazilian laws governing the acquisition of farmlands by foreign entities. In INCRA's view, TIAA's land purchases, which were conducted via the Brazilian company Radar Propriedades Agrícolas and numerous other Brazilian subsidiaries, should be considered together, as part of the same "economic group". As a result, the INCRA division recommends that all of the lands purchased via TIAA's subsidiaries since 2010, covering more than 150,000 ha, be immediately annulled, with all of the land titles considered null and void.
Moreover, the INCRA division agreed with our findings that TIAA’s land acquisitions were based on an illegal practice commonly used by land grabbers in the Cerrado region to occupy public lands and fraudulently claim legal title. The INCRA division stated that this was an additional reason to pursue the nullification of TIAA’s land titles. 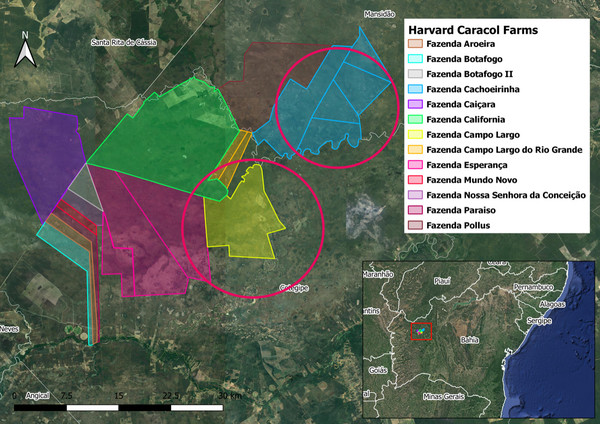 INCRA did not, unfortunately, conduct an assessment of Harvard’s land acquisitions, which were carried out in a similar manner. However, on 6 October 2020, the State Court of Bahia issued a judgement blocking the registration of lands for one of Harvard’s largest farmland acquisitions in Brazil— a 107,000 hectare agglomeration of lands known as Gleba Campo Largo. The court also reopened an investigation into Harvard’s acquisition of the Campo Largo lands, based on evidence provided by the state prosecutor that these were public lands that had been illegally transferred to private ownership. 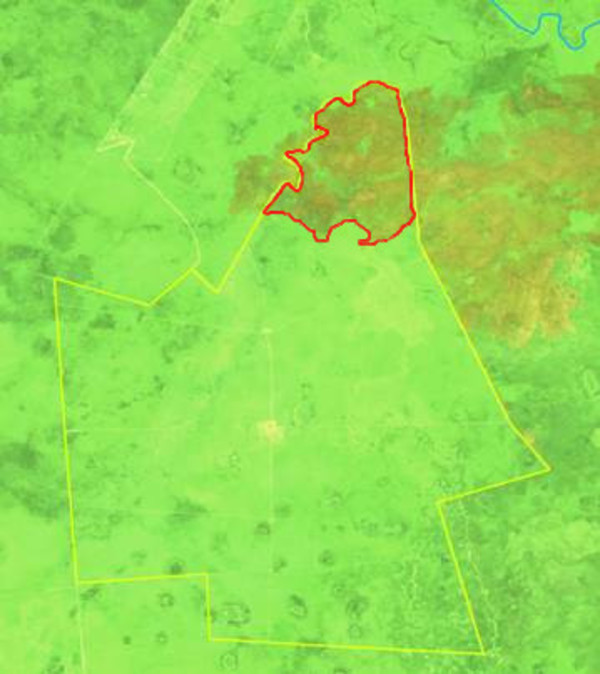 The Bahia court ruling comes as fires are yet again engulfing Gleba Campo Largo. According to satellite data compiled by AidEnvironment, a total of 8,500 hectares were burnt within Gleba Campo Largo between August and October 2020. The situation is equally catastrophic at another Harvard farm in the neighbouring state of Piauí. At Fazenda Coelho, a massive fire destroyed a large swath of forested area on the property, burning upwards of 8,600 hectares within the property boundaries and 11,000 hectares in total. Both the Gleba Campo Largo and Coelho farms were acquired by Harvard through its Brazilian subsidiary Caracol Agropecuária. 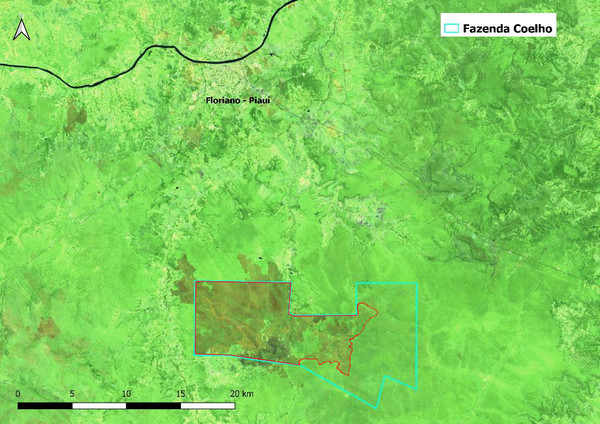 The Harvard endowment fund has been trying to sell off its Caracol Agropecuária properties and its other Brazilian farms in the face of mounting criticism and student protests. Unable to find a buyer, Harvard decided, earlier this year, to spin off its farmland division into an independent private equity firm called Solum Partners and to bring the AIG insurance group in as a partner. While it is not clear exactly which farmlands have now been transferred to Solum and which remain under management by Harvard, responsibility for the fires and land conflicts generated by Harvard's farmland purchases in Brazil remains with the University. As INCRA's position on the TIAA case makes clear, under Brazilian law the lands would still be deemed to be controlled by the same “economic group”. 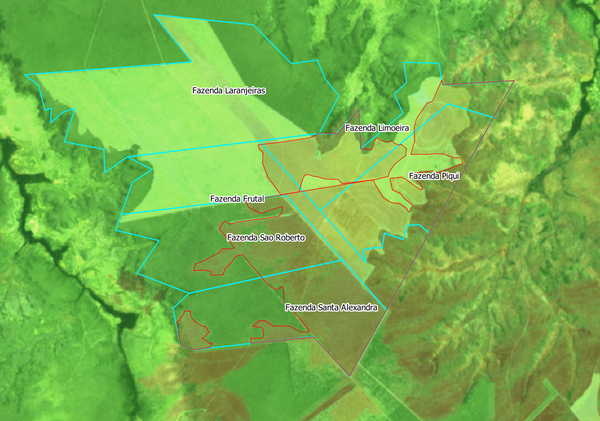 Farms in Santa Filomena, Piauí - registered in the name of Tellus Participações S/A, a subsidiary of TIAA. Burnt area on 16 October 2020 (1360 ha of burnt area in red) (Credit: AidEnvironment)

This year AidEnvironment also found major fires burning on TIAA's farms in the Cerrado region. In early October 2020, fires destroyed the forest reserve areas of TIAA's farms in Santa Filomena, Piauí, turning some 1,360 hectares to ash. In Riachão, Maranhão, TIAA's Fazenda Santana, which had significant fires in 2019, had another 500 hectares burnt this year. 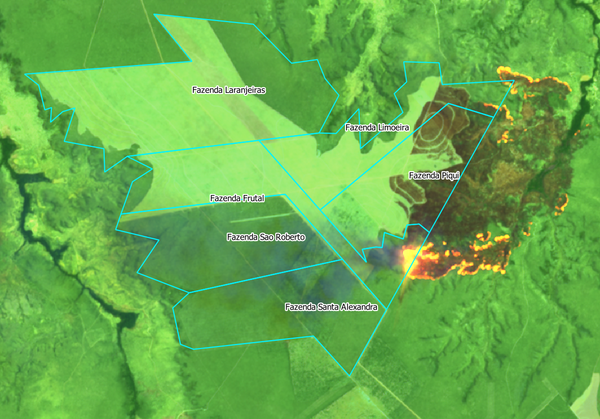 Farms in Santa Filomena, Piauí - registered in the name of Tellus Participações S/A, a subsidiary of TIAA. Active fires on 1 October 2020 (Credit: AidEnvironment)

TIAA and Harvard's reckless pursuit of farmlands is not only hurting rural communities in Brazil; it is harming the entire planet by destroying biodiversity and expanding mono-cropping plantations that are a main cause of climate change. This is a critical moment to turn things around. Brazilian authorities have all the evidence they need to nullify TIAA and Harvard's land deals and return the lands to the local communities. Meanwhile, workers in North America and Europe who have their pensions invested in TIAA's farmland funds and students and alumni at Harvard can seize on these new rulings by Brazil's land agency and courts to advance their calls for divestment from farmland.