Why we oppose Golden rice

(Released August 7th in commemoration of the International Day of Protest Against Golden Rice, now in its 7th year)
The push for corporate-led solutions to hunger and malnutrition is alarming. In particular, Golden Rice is now being proposed as a solution to the worsening hunger and malnutrition associated with the pandemic. Agrochemical transnationals (TNCs) and collaborating institutions such as the International Rice Research Institute (IRRI) are using concerns over food security during the pandemic to push for an industrial agricultural system that is already discredited. To quote PAN Asia Pacific:
“in the webinar “The future of food systems in Southeast Asia post-COVID19” organised by IRRI and the FAO, Jean Balie, IRRI’s head of Agri-Food Policy, said that they are “looking to increase the mineral and vitamin content in rice grains” as a response to the pandemic, alluding to renewed promotion of the genetically-modified Golden Rice, which has recently been approved for commercialization in Bangladesh and the Philippines” said PANAP.
Golden Rice projects and applications are currently underway in three countries. On December 10, 2019, the Philippines’ Dept. of Agriculture’s Bureau of Plant Industry (DA-BPI) issued a Golden Rice permit for Direct Use for Food, Feed and Processing. This was despite the standing challenge by farmers, scientists and civil society groups regarding Golden Rice’s unresolved safety and efficacy issues. 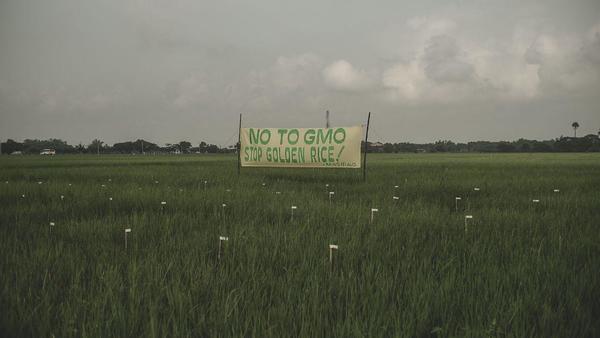 In August 2019, it was confirmed that Indonesia rice research centre (BB Padi) had grown Golden Rice in their testing fields in Sukamandi, West Java. But BB Padi is still awaiting permission from Indonesia’s biosafety clearing house for confined field testing in selected areas.
In Bangladesh, rumours have circulated that Golden Rice would be approved by the Biosafety Core Committee under the environment ministry last November 15, 2019. While there have been no specifics yet, proponents are optimistic that approval in Bangladesh will occur.
We, the Stop Golden Rice Network (SGRN), believe that Golden Rice is an unnecessary and unwanted technology being peddled by corporations purely for their profit-making agenda. Golden Rice will only strengthen the grip of corporations over rice and agriculture and will endanger agrobiodiversity and peoples’ health as well. Therefore, farmers, consumers and basic sectors have been campaigning against the propagation and commercialization of Golden Rice since the mid-2000s, utilizing various forms and actions, including the historical uprooting of Golden Rice field trials back in 2013.
Why is there intense opposition towards Golden Rice?
The importance of rice in Asian countries cannot be understated; 90% of rice is produced and consumed in Asia. Rice is at the center of the social, cultural and economic activities of peoples across Asia. It is also a political commodity as rice is the staple food for a majority of the Asian population. Asian countries such as the Philippines, Indonesia, and India are centers of origin of more than 100,000 varieties of rice. Also considered as among the most biodiverse countries in the world, a wide array of vegetables, fruits, root crops and cereals abound in the farms and forests of these countries, ensuring a dependable source of nutrition for the families and the communities.
Yet, malnutrition is prevalent, particularly among children and women. This is not simply because of the absence of an important nutrient or vitamin. It is caused by the “lack of access to sufficient, nutritious and safe food” due to poverty, and changing food production and consumption patterns (p. 27, UN FAO, 2017).
This impact is seen in IRRI’s Green Revolution wherein many farmers across Asia have become bound to the expensive inputs and seeds peddled by huge agrochemical TNCs who promote a single-crop diet. As a result of green revolution, white rice has become dominant in once very diverse Asian diets; but white rice has a high glycemic index which causes diabetes and 60% of global diabetes cases are in Asia. Packing more nutrients, like Vitamin A, in rice, which requires more rice consumption would make this worse. Especially with the new pandemic for which diabetes is considered a risk factor for severity of Covid-19.
The United Nations Food and Agriculture Organization (UN FAO) identifies the dominance of large corporations over food systems as among the factors that contribute to food insecurity and malnutrition (p. 27, UN FAO, 2017). In developing countries, large tracts of agricultural lands are being converted either to industrial and commercial land uses, or to large-scale mono-cropped plantations of cash crops such as pineapples, palm oil and bananas that hardly serve the nutrition needs of the people. FAO further acknowledges that the changes in food systems and diets, such as the prevalence of highly-processed foods and displacement of traditional foods and eating habits also contributes to the worsening trend of food insecurity and malnutrition.
Given this context, we assert that Golden Rice is simply a ‘band-aid’ solution to the wide, gaping wound of hunger and poverty. Worse, the issues that continue to hound Golden Rice further prove the point that it is unnecessary and unwanted
The worsening land-grabbing and land conversion cases, liberalization of agricultural commodities and increasing control of corporations over agriculture and food, however, are preventing farmers and their communities from having access to these safe and nutritious foods. In developing countries the challenges described above remain the main culprit of food insecurity and malnutrition. Both the development of biofortified crops like Golden Rice for solving health issues and corporate led projects in agriculture as ways to ensure food security represent a worrisome push for top-down and anti-diversity approaches to food and health that will ultimately undermine people’s capacities to strengthen their local food systems. By emphasizing dependence on just a few market-based crops biofortification actually promotes a poor diet with little nutritional diversity.
Golden Rice is a failed and useless product, and that is why we continue to resist and oppose it. Time and again, huge agrochemical companies, philanthrocapitalists and pseudo-public agencies have done everything in their power to deny the people’s right to participate in decisions about their food and agriculture. Already, zinc and iron GM rice and thirty other GM rice are in the pipeline, with Golden Rice serving as the Trojan Horse to lure the people into social acceptance and false security. 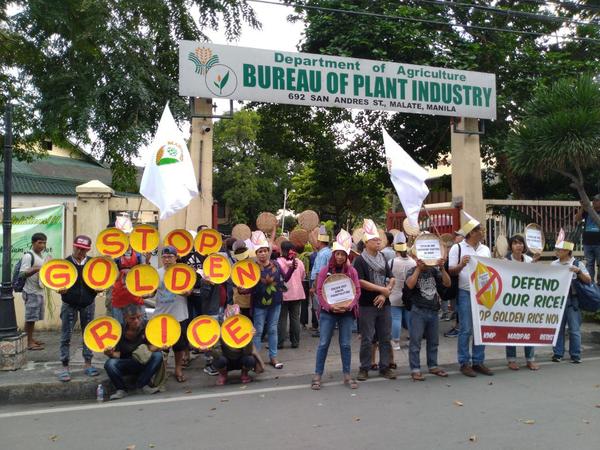