Soy production has exploded in the Cerrado region in recent decades. Photo: Marizilda Cruppe/Greenpeace
In December, three big players in the global seafood industry - Tesco, Nutreco and Grieg Seafood – announced a plan to source sustainable soybeans from a Brazilian region south of the Amazon that is notorious for deforestation and land grabs. Their 'Funding for Soy Farmers in the Cerrado Initiative' sets out to stop deforestation in the country's tropical savannah by paying farmers not to expand soybean production into forested areas. It was an indirect acknowledgement that the obscure aquaculture industry is deeply implicated in the problems associated with soybean production in Brazil's Cerrado and is worried about its image.
The aquaculture industry is one of the fastest growing consumers of soybeans, which it uses mainly as feed for fish. Although less than half of the fish consumed in the world currently comes from aquaculture, the FAO says this will increase to 60% by 2030. This, also in the context of an increasing global consumption of seafood, is putting further pressure on the expansion of soybean production in Brazil.
Brazil's biodiverse Cerrado has been one of the main areas of the world where soybean farming has expanded over the past decade and a half. Roughly the size of Mexico, straddling Brazil's mid-section from its far western border with Paraguay and stretching northeast towards the Atlantic coast, the Cerrado has seen about half of its native forests and grasslands converted to farms, pastures and urban areas over the past 50 years. Much of this is because of the soybean boom. Today, only 20 percent of the original ecosystem remains fully intact. While global attention has focussed on the Amazon, awareness about deforestation in the Cerrado is increasing, as are efforts to try and stop it.
This has created a problem for companies that want to profit from the cheap global supply of soybeans but are sensitive about their public image. So they have been scrambling to find ways to keep the soybeans flowing while distancing themselves from the destruction happening in the Cerrado. In 2017, 100 retail and branded food companies and financiers, including McDonalds, Walmart, Unilever and Tesco, came out in support for the Cerrado Manifesto in which they pledged to eliminate deforestation from their supply chains (while saying nothing about reducing their reliance on soybeans from the Cerrado). Now three leading companies from the seafood sector that were part of the Manifesto supporters group, are taking it further by proposing a funding mechanism that will provide financial incentives to farmers to produce soy only on existing agricultural land and not into natural areas.
Tesco, a large British supermarket chain and buyer of farmed fish, has promised to donate US$13.1 million to the initiative over the next 5 years. Nutreco, one of the world's largest producers of aquaculture feed, has committed US$1.1 million annually over the same period. And Grieg Seafood, which farms salmon in Norway, Canada and the UK, says it will contribute US$2.00 per ton of soy used annually in its feed over the next 5 years. There's still a long way to go to reach the US$250 million that the promoters of the programme say is necessary to ensure farmers only produce soy on existing agricultural land over a five-year period. But the lack of committed funds is just one small part of the problem with the initiative.
We see three major reasons to doubt that this new initiative will effectively halt deforestation.
1) When the payments stop, so does the conservation.
This is the main defect with these kinds of voluntary initiatives. There is no certainty about who pays and for how long. If after five years of this initiative, the companies drop out or stop paying, who's to stop the soy producers from deforesting once again? Assuming that they actually had stopped doing so, which is not likely with the current meagre financial offers on the table.
Some argue that this question can be solved by assigning economic value to the to be conserved plants, animals and ecosystems, but this approach carries a whole set of other problems. Putting a price on nature by turning it into a commodity being traded on stock exchange markets to compete with the very agricultural commodities that cause the environmental destruction is a very questionable and controversial approach to solve the problem. Thus, voluntary initiatives based on payments, whether by donations or by building markets, are simply not effective in tackling the problem of deforestation.
2) Displacing deforestation 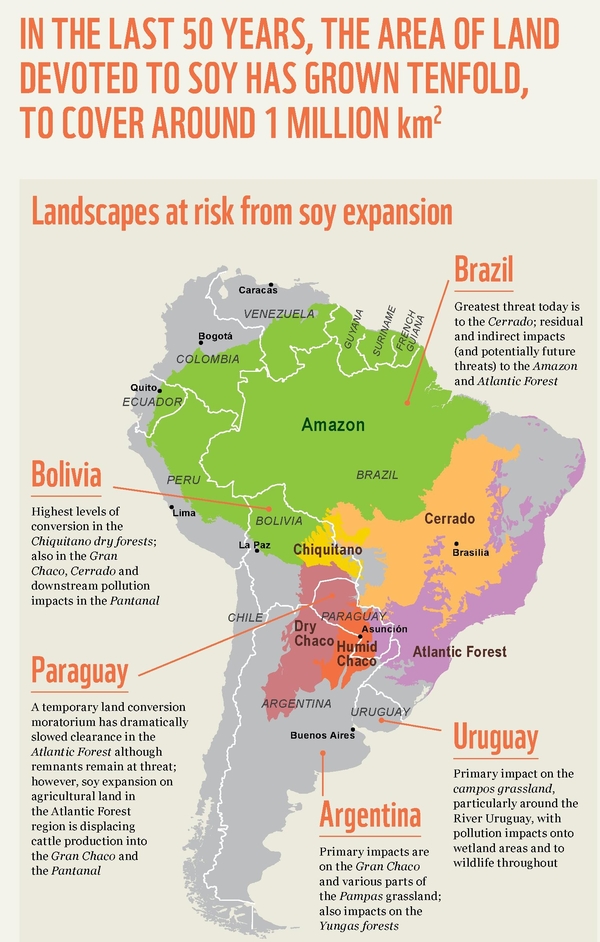 (source: WWF)A voluntary initiative like this one, focussed on one product and one region, is likely to end up displacing deforestation to areas where there are no economic incentives to conserve. This is exactly what happened with the Soy Moratorium, signed in 2006, which was specifically and only oriented towards soybean production in the Amazonian biome and excluded cattle raising which is the main source of deforestation in that region. Thus, soybean began to expand over the areas already deforested by cattle, while the cattle advanced further into the forest. At the same time, soybean farming expanded massively into the Cerrado where there were no such programmes.
In this context the cycle of deforestation and land grabbing in the Amazon biome and the expansion of soy in the Cerrado were in full alignment with the 2006 Moratorium. That is exactly why the major agribusiness and grain processing corporations, like Cargill and Bunge, signed on to the Amazon Moratorium but stayed clear of the Cerrado Manifesto. It is worth noting that deforestation in the Amazon biome had already fallen by over 40% in 2005 precisely when a broad action plan for the prevention and control of deforestation in the Amazon had started in 2004 – but the corporations got all the credit (and even an environmental award) for their support to the Moratorium.
It is not just about how deforestation moves from one region to another within Brazil. Deforestation by agribusiness is also rampant in other areas of neighbouring countries: the Argentine and Paraguayan Chaco, the Colombian llanos, and the Bolivian Chiquitano dry forest.
3) Is it possible to have a sustainable global soybean chain under current conditions?
We seriously doubt it.
Globally, the area planted to soybean is growing fast. Between 2009 and 2018, soy’s global acreage grew 22% to 123 million hectares. The projection is that by 2028 it will grow 23% more to 151 million hectares. The expansion is driven mainly by increasing industrial meat, dairy and fish production across the world, as well as an alarming increase in sales of ultra-processed foods. Where will all this extra soy be planted?
Graph: (https://ussoy.org/long-term-world-soybean-outlook/) 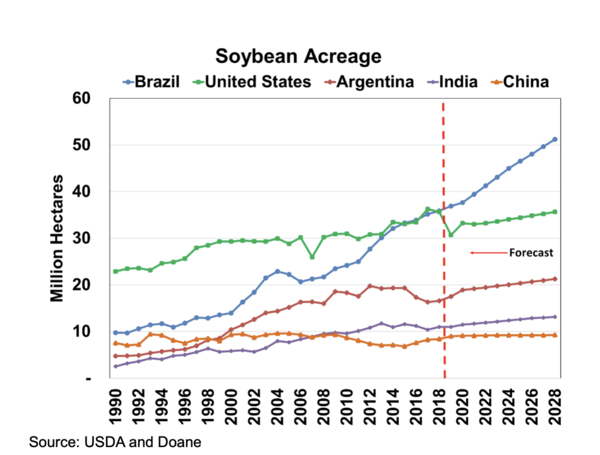 The answer: mostly in Brazil.
At the beginning of the 1960s, Brazil had less than a quarter of a million hectares of soybean planted. By 1990 this figure had shot to over 11 million ha, and by 2018 it had tripled to 34 million ha. According to the US Department of Agriculture, before the end of this decade, Brazil will grow some 50 million hectares of soybean – another whopping increase of over 40%. (see graph) Much of this expansion is being driven by foreign companies who are speculating on rising land prices and are implicated in the 2019 surge of fire outbreaks in the Cerrado.
There is simply no way that Brazil can carry out such an expansion in a sustainable way. A few seafood companies throwing cash at soybean farmers in the Cerrado region may garner the companies some PR points, but it is not going to stop deforestation.
Jumping off the commodity bandwagon.
The Brazilian campaign in defense of the Cerrado has recorded innumerable land conflicts caused by the expansion of soybean production and the infrastructure built to provide exports. Local communities have been devastated by violent land grabs and expulsions, pollution and health problems caused by the aerial spraying of agrochemicals, and the contamination and depletion of their water sources because of irrigation, just to cite a few of the problems.
Providing payments and economic incentives to those historically responsible for the Cerrado's deforestation is a rather unjust approach to take, and, in the end, one that will never work. Rather, Brazil (and the rest of the world) should ask itself how we can jump of this ever more destructive soy commodity bandwagon, and stop expanding these plantations. This will necessarily involve shifting away from the industrial livestock and aquaculture production that currently drives so much of the soy expansion. And it will require a return to the respect and support for the work, knowledge, techniques and intergenerational practices of traditional peoples and communities of the Cerrado.