On 18 October 2019, several staff from GRAIN and ENDA Pronat visited the leaders of the Collective for the defense of the Ndiaël lands, in the municipality of Ngnith, northern Senegal. Leaders of 30 villages out of the 38 that belong to the collective, representing about 10,000 people, were present. These communities are pastoral herders and farmers, with deep roots in these lands. They raise goats, cattle, horses, sheep and donkeys. They grow sweet potato, rice, watermelon, tomatoes, onions and potatoes. The land is arid, with sparse vegetation and rainfall, but they know how to manage it well. They were happy to receive us − and to see that they were not forgotten.
For the past seven years, these communities have been in crisis. Back in March 2011, local authorities signed a protocol granting a 20,000 hectare land concession to a company called Senhuile SA, which at the time said it would use it to produce biofuel for export. The land was originally located in the area of Fanaye, east of Ngnith, in the department of Podor. The communities there were not consulted, however, and they did not accept the project. They rose up in protest, demanding their lands back, again and again. One day in late October 2011 violence broke out, resulting in the death of two villagers and severe injuries for dozens more. The country was shocked, and the project halted. Months later, it was relocated to the Ndiaël region, just before Macky Sall came to power. In August 2012, he confirmed its go ahead via presidential decree.
As the project was transferred, new investors came in, including the Italian Tampieri Financial Group. The Senegalese government declassified 20,000 ha of land in a nature reserve surrounding Ngnith and gave it to the company. From 2012 until 2017, the investors promised all sort of things − they said they would grow rice to feed the nation, peanut seeds to cover Senegal's crippling shortfall (the Chinese, it was said, had bought up the country's stock) or corn to nourish livestock, the backbone of Senegalese rural life. They boasted that they would build schools and health clinics, and send nearby villagers on the Hajj. But little came of all this except for speculation, grave financial distress, lawsuits filed by company partners against each other, seizures of fraudulently imported machinery by customs authorities and jail time for their Board director.
In 2017, the Italians pulled out and left nothing.
Today, the communities of the Ndiaël that fought Senhuile since it arrived are still there. For them, nothing has changed. The 20,000 ha are out of reach, even though they live within them. They have no access, no freedom, no livelihood. They live in an open-air prison.
As far as they can tell, nothing was ever actually done since the investors arrived; their lands were merely speculated with. They understand that the company incurred a loss of €150 millions − for the herders, an unfathomable amount. And even though the company is now gone, Senhuile continues to do damage to them. Their livestock cannot roam or eat or drink because of the barbed wire that the Italians left behind. It has spread all over the landscape and become half-buried in the sandy soil − immobilised, a permanent threat. The open irrigation canals are another permanent danger. Animals are regularly falling in and getting killed, as happened to several children a few years back. After it knocked down so many trees, the company left a desert where grazing has become nearly impossible due to the wind which is filling watering holes with sediment.
The communities need access to the land, for farming and herding. They need access to water to irrigate. In 2017, the regional governor of Saint Louis assured them that they would get 10,000 ha demarcated and allocated to them, through a special decree. But none of this materialised.
Today, there are reports that Les Fermes de la Téranga, the name of the new company that took over Senhuile and occupies its headquarters, is another front for financial mischief. According to investigative journalist Baba Aïdara, the company has served as a conduit to pass money from Frank Timis, a Romanian businessman, to Aliou Sall, the brother of President Macky Sall. This detail came on the heels of an explosive BBC report that accused Aliou Sall of receiving funds from Timis in exchange for favours from the state in the form of oil and gas exploration rights, now sold to BP for a $10 billion payout.
The communities in Ngnith feel they cannot repair what has been destroyed. As they put it, "We have experienced nothing but misery since Senhuile arrived." At some point, the corporate social responsibility people of Senhuile tried to convince them to make peace with the company and benefit from its promised social investments. Now they are glad they were not duped!
The leaders and families of the Ndiaël collective are still in combat against the company. “The lion is sleeping, but it is not dead,” as they put it. They want the state to cancel the 20,000 ha concession and give them their lands back. They also want reparations for the damages suffered over the years – loss of lives, livelihoods, land and animals – and are thinking of going to court for that.
For us, the visit was an eye opener. We were shocked that nothing has changed even though the company failed and left. This is criminal. The communities are stuck in a situation of extreme injustice, perpetrated by the state as much as by the investors who have come and gone. They need support from civil society to get out of this situation and get their lands back, and they need it now.
(All photos by GRAIN)
Full set of photos: https://photos.app.goo.gl/u2jjT32pC3VFcRgR8
For further information, please contact Ardo Sow at Enda Pronat in Dakar: [email protected], +221776286798. 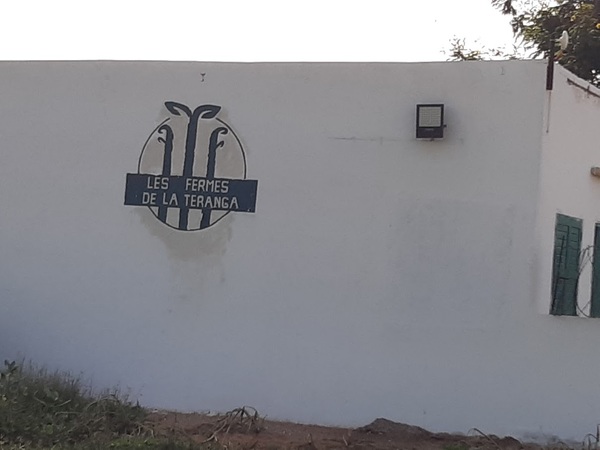 There are reports that "Les Fermes de la Téranga", the name of the new company that took over Senhuile and occupies its field office, is another front for financial mischief. (The security guards would not let us take photos, so we snuck around the side.) (Photo: GRAIN)