“Biofortification” aims to increase a select few nutrients in crops through plant breeding, whether using traditional techniques or through new tools of biotechnology. While there are 40 key nutrients that we must get from our food for good health, biofortified crop research is only focused on three: zinc, iron and vitamin A.
Research is currently underway to develop biofortified rice, wheat, sorghum, banana, lentil, potato, sweet potato, cassava, beans and maize in Africa, Asia and Latin America. Part of this research is managed by the Consultative Group on International Agricultural Research divided across three units: the International Rice Research Institute, focusing on genetically modified (GM) rice; the International Potato Centre, focusing on sweet potatoes; and the HarvestPlus programme, which coordinates all the rest. The funding comes from the Bill and Melinda Gates Foundation and USAID, among others. Private research is also being done by PepsiCo, Dupont, Bayer, Nestle and others.
Proponents of biofortification argue that it is the cheapest way to address malnutrition: once you breed the plant it can be grown again and again. They often use deceptive language to promote these crops which begins with the very word “biofortified” and suggests that all other foods or plants are inherently weak or deficient. 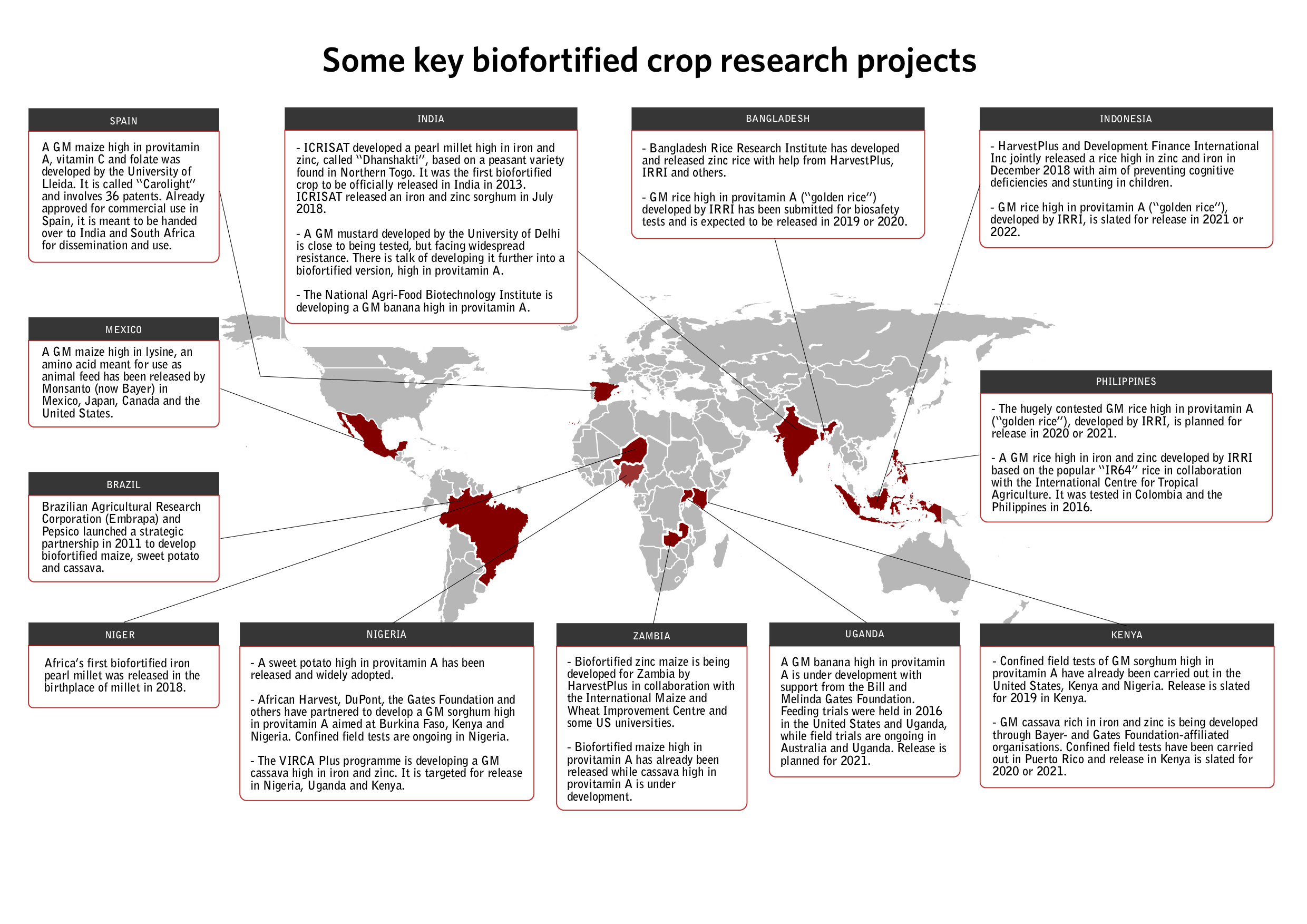 Terms like “golden rice”, “super banana” and “orange maize” are used to convince consumers that the biofortified versions of these specific seeds or foods are superior to their non-biofortified counterparts. These names, not to mention the crops themselves, are sometimes registered as intellectual property even if their use is intended to be free of charge.
To date, about 300 biofortified crop varieties have been developed and released worldwide. Although none of those released to farmers thus far have been GM, quite a number are in the pipeline and on their way to being released.
Women and children are often targeted as the prime beneficiaries of biofortified crops. But rural communities and women’s groups across the world often view diversified local food systems and traditional diets as the real solution to poverty and malnutrition.
GRAIN and friends issue a call to action; inviting women's groups and peasant organisations to examine the issue of biofortification—locally, regionally, nationally or globally. We think there is enough information and experience to justify a boycott of all biofortified crops and foods, coupled with demands for investment in a different approach to agricultural research based on agroecology, local culture and food sovereignty.
We propose that alternative approaches to address hunger and malnutrition could be based on the following five principles:
1. Sharing information and education about healthy diets and living, with an emphasis on women and gender equality;
2. Strengthening women's leadership in food policy decision-making and food systems research;
3. Promoting diversity in farming and in diets, rather than monocultures or single foods. This includes valuing local plants and animals, food cultures, seeds and local knowledge that sustain health and keep communities strong;
4. Lowering the cost and increasing the availability of fruits and vegetables, in part by redirecting subsidies and other public funds currently promoting industrial commodities and processed foods; and
5. Resisting the neoliberal takeover of food and agriculture that treats food and crops as commodities and patentable intellectual property to facilitate corporate profits. Addressing the root causes of poverty and hunger requires keeping food and agriculture under public and community control.
To learn more, see the full report “Biofortified crops or biodiversity? The fight for genuine solutions to malnutrition is on” at https://www.grain.org/e/6246
This action was initiated by GRAIN, Pesticide Action Network Asia Pacific (PANAP), Food Sovereignty Alliance India, People's Coalition on Food Sovereignty (PCFS), Eastern and Southern Africa Small Scale Farmers’ Forum (ESAFF); Growth Partners Africa; Participatory Ecological Land Use Management (PELUM) Kenya; Kenya Food Alliance; Participatory Ecological Land Use Management (PELUM) Uganda and African Biodiversity Network (ABN).