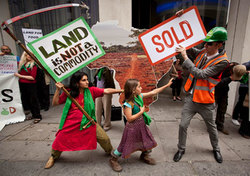 A statement signed by over 60 environmental, development and farming groups calls for pension funds and other financial institutions to stop land grabbing. “Africa, Asia and Latin America are seeing an acceleration of land grabbing at a rate not seen since colonial times,” says NyikawOchalla, of the Anuak people from Ethiopia, whose livelihoods are threatened by the land grabs of foreign companies. “Land is the lifeline of hunter-gatherers, pastoralists, fishing and farming communities in the Ethiopian lands targeted by land grabbing policy.  It is a myth that our lands are ‘wastelands’, only suitable for commercial agricultural development.”

Driven by high food prices, increasing demand for agrofuels, raw materials and grain fed livestock, and low returns from beleaguered financial markets, the number of corporations, governments, public and private financial institutions engaging in large-scale acquisitions of land in the global South is soaring, threatening the livelihoods and food sovereignty of countless local communities. Millions of hectares of land have been leased or bought up in recent years, mainly to produce food or fuel for the international market. As a result, peasants, herders, fishers and other rural households are being dispossessed of their means to feed themselves and their communities, sometimes through promises of jobs, sometimes at gunpoint. Land grabs are also resulting in land and water use changes, causing ecological destruction and climate change related emissions.

Investment funds, agribusiness and sovereign wealth funds are “investing” more and more in land, intending to make their investment portfolios more diverse in the face of global economic risks and to profit from the rise in land and commodity prices.[1] Land grabs are also being financed indirectly, when banks provide credit facilities to land grabbing companies, or when hedge funds and private equity firms buy stakes in overseas companies that control land.[2] Even governments are involved, through the for-profit development finance institutions that they run.

Pension funds are, at present, reported to be the largest institutional “investors” in farmland worldwide.[3] Yet the money used here is workers' retirement savings. This means that wage earners and citizens may be implicated in massive violations of the human rights of local farming communities, including their rights to food, land, water, an adequate standard of living, their cultural rights and their right to self-determination – in breach of international law.

With respect to this matter, the undersigned civil society organisations and activist groups serve notice to these pension funds and other private and public financial institutions, and to the States that are in a position to regulate them.[4] The human rights mentioned above imply the extraterritorial obligation of these States to urgently ensure that these funds and institutions:

[1] The notion that their financial stakes in agricultural land amount to "investment" must be questioned. The World Bank estimates that up to 80% of large scale global land acquisitions announced in recent years are not under production (http://go.worldbank.org/OAV3EK4F00). Academic reports demonstrate rent-seeking behaviour in numerous cases (http://www.future-agricultures.org/papers-and-presentations/doc_download/1324-hubert-cochet-and-michel-merlet-). Private equity groups and many specialised farmland funds operate frequently on the basis of a high return five-year exit strategy. Civil society groups in a range of African countries have reported in the last few years that numerous deals turn out to be purely speculative. And land investors themselves point out that they can easily make their profits on simply renting or selling ("flipping") the land (http://farmlandgrab.org/post/view/20165). How, where and by whom these investments are directed is key, as many of them can be harmful. There is increasing evidence that the most vital and largest share of investments in agriculture are made by family farmers themselves, and this is the type of investment to be supported (http://www.ukfg.org.uk/pics/Yaounde_Agricultural_Investment_Farmers_Workshop_Synthesis_Report-EN_1.pdf).

[3]  Of the estimated U.S. $100 billion that pension funds invest in commodities, some $5-15 billion reportedly goes into farmland acquisitions. These commodity and farmland investments are expected to double by 2015. GRAIN: Pension Funds: Key Players in the Global Farmland Grab, June 2011(http://www.grain.org/article/entries/4287-pension-funds-key-players-in-the-global-farmland-grab).

[4] The following points are initial demands from Civil Society, and will be added to as more evidence and information becomes available. This statement follows the March 2012 Finance of Land Grab Civil Society Strategy Meeting in Brussels, and represents the first steps of an emerging process.