The people of the world confront the advance of capitalism: Rio +20 and beyond Via Campesina's take on the 'Green Economy' and other business plans being prepared for the Rio+20 Summit. A good summary.

Position Paper of La Via Campesina 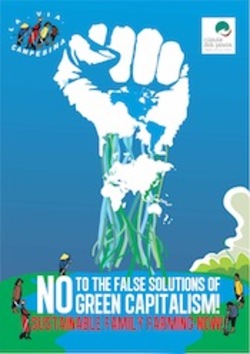 Governments from all over the world will meet in Río de Janeiro, Brasil from June 20-22 2012, to supposedly commemorate 20  years since the “Earth Summit”, the United Nations Conference on the Environment and Development, that established for the first time a global agenda for “sustainable development”. During this summit, in 1992, three international conventions were adopted: the Convention on Biological Diversity, the United Nations Convention on Climate Change, and the Convention to Fight Desertification. Each of these promised to initiate a series of actions destined to protect the planet and all of the life on it, and to allow all human beings to enjoy a life of dignity.

At that time , many social organizations congratulated and supported these new conventions with hope. Twenty years later, we see the real causes of environmental, economic, and social deterioration continuing without being attacked. Worse still, we are profoundly alarmed that the next meeting in June will serve to deepen neoliberal policies and processes of capitalist expansion, concentration, and exclusion that today have enveloped us in an environmental, economic, and social crisis of grave proportions. Beneath the deceptive and badly intentioned term “green economy”, new forms of environmental contamination and destruction are now rolled out along with new waves of privatization, monopolization, and expulsion from our lands and territories.

La Via Campesina will mobilize for this event, representing the voice of the peasant inthe global debate and defending a different path to development that is based on thewellbeing of all, that guarantees food for all, that protects and guarantees that thecommons and natural resources are put to use to provide a good life for everyone andnot to meet the needs for accumulation of a few.

20 years later: the planet and humanity in crisis

20 years after the Earth Summit, life on the planet has become dramatically difficult.The number of hungry people has increased to almost a billion, which means that oneout of every six people is going hungry, mostly children and women in the countryside.Expulsion from our lands and territories is accelerating, no longer only due toconditions of disadvantage imposed upon us by trade agreements and the industrialsector, but by new forms of monopoly control over land and water, by the globalimposition of intellectual property regimes that steal our seeds, by the invasion oftransgenic seeds, and by the advance of monoculture plantations, mega-projects, andmines.

The grand promises of Río ’92 have resulted a farce. The Convention on Biodiversityhas not stopped the destruction of biodiversity and has strengthened and generatednew mechanisms destined to privatize it and turn it into merchandise. Desertificationcontinues to accelerate due to the industrial agriculture and the expansion ofagribusiness and monoculture plantations. Global warming —with all of the disastersand dramatic suffering it is already causing—has not slowed, but has accelerated andbecome more severe.

The great deceit of 1992 was “sustainable development”, which social organizations initially saw as a possibility to confront the root of the problems. However, it was nothing more than a cover-up for the search for new forms of accumulation. Today they look to legitimize a new façade under the name “green economy”.

The “green economy” and other false solutions: a new assault on the people and their territories.

Capitalist profit-seeking has generated the biggest systemic crisis since 1929. Since2008, the hegemonic system has looked for ways out of its structural crisis, searchingfor new possibilities for accumulation that support its logic. It is in this context that thecorporate takeover of agreements on biodiversity and climate change have occurred,and consequently, the development of this new financial engineering called GreenCapitalism.

Governments, business people, and the organizations of the United Nations have spent these last years constructing the myth of the “green economy” and of the “greening of technology”. They present it as a new possibility to bring together environmental stewardship and business, but it is in fact the vehicle to obtain new advances of capitalism, putting the entire planet under the control of big capital. . There are various mechanisms that will be advanced by the green economy and all of them will increase the destruction. More specifically,

This “green” capitalism has the rural commons, agriculture, land and water particularly in its sights. We are already suffering from its effects in the form of land grabs or monopolization of land, privatization of water, the oceans, of indigenous territories, the national parks and nature reserves; all these processes are being accompanied by the forced expulsions of peasant and indigenous communities.

The real solution: put peasant and indigenous farmers at the center

We, peasants and indigenous peoples, are the ones who are concentrated in the highest levels of poverty because we have been deprived of land and we have been constrained by law or by force so that we cannot cultivate and exchange freely. Nonetheless, we are people who have been resisting expulsion from the countryside, and still we are more than 90% of the rural population. Our forms of agriculture cool the planet, care for ecosystems and secure the food supply for the poorest.

Every real solution happens to impinge upon the unbridled profits of capital, put an end to the complicity of governments and supports forms of production that effectively care for the planet. Food Sovereignty is at the heart of the necessary changes, and is the only real path that can possibly feed all of humanity. Our proposals are clear and introduce real solutions:

We are mobilized to unmask Rio +20 and green capitalism

We, peasants, family farmers, landless peasants, indigenous peoples and migrants, men and women, decidedly oppose the commercialization of the earth, our territories, water, seeds, food, nature, and human life. We reiterate what was said at the People’s Summit in Cochabamba, Bolivia: “Humanity faces a grand dilemma: to continue the path of capitalism, predation, and death, or undertake the path of harmony with nature and respect for life.”

We repudiate and denounce the green economy as a new mask to hide increasing levels of corporate greed and food imperialism in the world, and as a brutal “green washing” of capitalism that only implements false solutions, like carbon trading, REDD, geoengineering, GMOs, agrofuels, bio-char, and all of the market- based solutions to the environmental crisis.

Our goal is to bring back another way of relating to nature and other people. This isalso our duty, and our right and so we will continue fighting and calling on others tocontinue fighting tirelessly for the construction of food sovereignty, for comprehensiveagrarian reform and the restoration of indigenous territories, for ending the violence ofcapital and restoring peasant and indigenous systems of production based onagroecology.

NO TO THE FALSE SOLUTIONS OF GREEN CAPITALISM