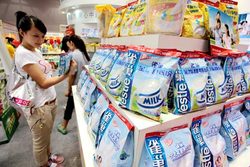 agreement with a local government in north China's Inner Mongolia region to build a 2,000 cow dairy farm in the area. The company says the farm will be "a transitional solution between small and individual farmers and a large modern farm".

Speaking to ABC Radio, Phil Turner, the President of Fonterra China, called China's dairy market an "enormous opportunity". Fonterra recently constructed several farms clustered around Beijing, with about 12,000 cows in total. The company is pursuing plans to build over thirty 5,000 head feedlot dairy farms in China, with a goal of producing 1 billion litres of milk in total per year by 2020. China's current milk production is 35 billion litres per year.

Over the past few years, multinational corporations have ramped up their efforts to take over dairy markets in the South, which remain largely in the hands of local markets and small farmers. Part of their strategy is to develop local supply chains with new mega dairy farms, which they are increasingly operating themselves. The trend and its consequences are detailed in the December 2011 report, The great milk robbery: How corporations are stealing livelihoods and a vital source of nutrition from the poor.