With a corporate culture built on bribery, Walmart was running with plenty to hide by Wade Rathke, posted on his Chief Organizer Blog

(See also Can India turn the tide on the supermarket tsunami? by GRAIN)

New Orleans  We told you so!  We just couldn’t be heard clearly enough over the roaring engines of the corporate spinning machinery of Walmart in September 2005.

Let’s set the stage exactly.  In Florida at the sharp point of the organizing engagement at Walmart as the curtain 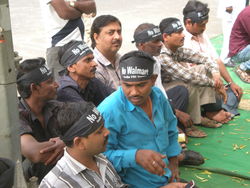 was being pulled down by all of the top corporate management from Lee Scott, the CEO on down, we were convening the first Sitefighters’ Conference in St. Petersburg, Florida bringing together Walmart Watch, Wake-up Walmart, and all of the other key players around the country to strategize on how to bring community, workplace, and political pressure to force some accountability on the company.  Walmart Watch, a coalition driven by SEIU, and Wakeup Walmart, the UFCW’s effort to tackle the company on the web, were nicking the company regularly in the papers, and our efforts through our community-labor alliance, WARN (Walmart Alliance for Reform Now) and direct organizing of workers in the Walmart Workers Association were showing good results.

At that same time in September 2005 when Walmart was trying to garner good publicity for its logistical response to Hurricane Katrina on the Gulf Coast, the internal reality was “duck and cover:”

In September 2005, a senior Wal-Mart lawyer received an alarming e-mail from a former executive at the company’s largest foreign subsidiary, Wal-Mart de Mexico. In the e-mail and follow-up conversations, the former executive described how Wal-Mart de Mexico had orchestrated a campaign of bribery to win market dominance. In its rush to build stores, he said, the company had paid bribes to obtain permits in virtually every corner of the country.

The lengthy New York Times piece by David Barstow gives an amazing inside look at how Walmart was working from the bunkers of Bentonville and the impact our work was having:

Under fire from labor critics, worried about press leaks and facing a sagging stock price, Wal-Mart’s leaders recognized that the allegations could have devastating consequences, documents and interviews show. Wal-Mart de Mexico was the company’s brightest success story, pitched to investors as a model for future growth. (Today, one in five Wal-Mart stores is in Mexico.) Confronted with evidence of corruption in Mexico, top Wal-Mart executives focused more on damage control than on rooting out wrongdoing.

In one meeting where the bribery case was discussed, H. Lee Scott Jr., then Wal-Mart’s chief executive, rebuked internal investigators for being overly aggressive. Days later, records show, Wal-Mart’s top lawyer arranged to ship the internal investigators’ files on the case to Mexico City. Primary responsibility for the investigation was then given to the general counsel of Wal-Mart de Mexico — a remarkable choice since the same general counsel was alleged to have authorized bribes.

The level of bribes?  $24,000,000 has been documented.  Most were paid through an elaborate network of fixers (gestores).

All of the top brass at Walmart knew the score.  Lee Scott slowed the investigation down and punted it back.  Michael Duke, who was their international man at the time, and the executive of our ACORN International’s India FDI Watch Campaign was checkmating in India to stop their expansion there,  knew the whole deal and is now the Walmart CEO.  The head of the “ends justify the means” team for Walmart in Mexico fueling the fire of corruption, Eduardo Castro-Wright, is now the retiring Vice-Chairman of Walmart.

As the whistleblower allegations finally found traction, the company filed a vague “play pretend” notice with the FCC without identifying that the problem was in Mexico and still claiming there would be no “material impact” to its results.  Now of course there will be full scale investigations in Mexico and in the United States for violations of both countries laws.  In the US these bribes by Walmart are clear criminality under the Foreign Corrupt Practices Act.  It is hard to imagine a clearer case of situations where top executives should be held accountable (Scott, Castro-Wright, Dukes, etc) and face criminal charges and potentially jail.  In Mexico the detailed annotations on the invoices indicating the officials who were bribed could absolutely lead to jail time as the scandal widens.

An international corporate culture based on bribery also makes us wonder whether the same system has been active in their work to expand and find a foothold in India where their efforts and others to modify the restrictions on foreign direct investment in multi-brand retail have been huge political issues in recent months, bringing government to a standstill at some points.

All of this is huge and demands sweeping action.