The Aguán River Valley in the department of Colón, Honduras, is a site of both an ongoing conflict and a powerful social movement. In a 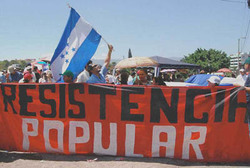 struggle for land that greatly predates, but was also further exacerbated by, the 2009 military coup in Honduras, campesinos in the Aguán are constantly subject to human rights abuses, repression and injustice. But, as witnessed during my recent participation in an Alliance for Global Justice accompaniment delegation, these communities are also unfailingly resilient. Poor, vulnerable, and landless, the Aguán campesinos truly represent and embody the Resistance movement in Honduras.

The land in the Aguán Valley is rich, fertile, and highly coveted. As a result of the Agrarian Reforms of the 1960's and 1970's, Honduran campesinos received farmland in the Aguán and proceeded to clear, prepare, and develop the once-rainforest Valley into an agricultural region. Subsequent abolishment of the Agrarian Reform legislation in the early 1990's led to growing privatization and changing agricultural tariffs, while structural adjustment policies and trade liberalization hit small farmers the hardest, increasing their vulnerability to global markets. Deceitful land grabs and state policies supporting large landowners, corporate agriculture, and systematic repression of the peasantry battered campesinos, robbing them of their land and their rights while leaving agribusiness and the oligarchy intact.

Threats, intimidation, manipulation, and dire economic straits pressured many campesino cooperatives to sell their land, resulting in a gross re-concentration of land ownership in the region, primarily in the hands of agribusiness moguls Miguel Faccusé, René Morales, and Reynaldo Canales. Even campesino communities that never voluntarily surrendered their titles have been forced from their land through repressive means, such as illegal evictions. Today, campesinos continue to grapple with the challenges of landlessness and clashes against large landowners and paramilitary forces in their ongoing fight for land titles and for justice. Their struggles are many, but their common demand and essential need for land unites the campesino movement.

The situation in the Aguán is highly complex, intertwined in a context of political weakness, widespread corruption, narcotrafficking, and systematic displacement of poor populations for the benefit of wealthy "developers." Former President Manuel Zelaya initiated agrarian legislation to grant title to certain campesino organizations, but these agreements were halted prior to their realization when Zelaya was overthrown in June 2009. Violence against campesinos has escalated in the wake of the coup, and current President Pepe Lobo has responded to discontent in the Aguán with heavy militarization of the region and state-led repression of campesinos. The movement in the Aguán reports that 55 campesinos have been killed at the hands of private security guards of large landowners, in cooperation with police and military forces, since the coup in 2009. Many others have been captured and tortured, and regular, targeted threats of disappearance, eviction, and death psychologically torture campesinos and function as a constant reminder of the insecurity and vulnerability of their livelihoods.

Despite this regime of systematic, structural, state-funded violence, campesinos of the Aguán have organized their communities to resist the repression, fight for land rights, and work toward viable alternatives. The campesino movements have recently established the Observatorio de los Derechos Humanos en el Bajo Aguan, a Human Rights Observatory with representation from local organizations, including each Aguán campesino community. The Observatorio also invites international human rights observers to join in solidarity with the movement through long term accompaniment in Honduras. Campesinos throughout the Aguan Valley are hopeful that the inauguration of the Observatorio will aid in denouncing repression and violence and will bring heightened international attention to the violations of human rights and impunity occurring in the Aguan Valley.

Campesinos have been deprived of their land and are suffering grave violations of human rights to fuel the prosperity of capitalist agribusiness. Nevertheless, they continue to occupy and fight for land in the Aguán Valley and to mobilize their communities as part of a larger national popular resistance struggle for democracy and justice in Honduras.