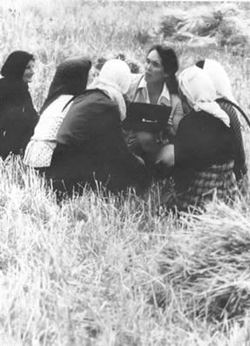 It was with great sadness that we learned of the passing of Dr. Erna Bennett on 3 January 2011 at her home in Scotland. Erna was 86 years old. She was a world-renown plant geneticist and one of the early pioneers who warned the world about the tragedy of "genetic erosion". She joined the UN's Food and Agriculture Organisation (FAO) in 1967, where she succeeded in mobilising FAO to become involved directly in collecting the genetic resources of crop plants in many countries, especially their centres of diversity and origin, while there was still time.

While at FAO, Erna became increasingly concerned that the efforts to conserve the world's precious and irreplaceable seed diversity stood in grave danger of being hijacked by powerful private interests. She observed how multinational food, seed and pesticide companies gained increasing control over the worlds agricultural biodiversity through the applilcation of intellectual property rights on seeds. She also witnessed how they were getting a growing influence at the FAO itself. Having battled within FAO for many years to keep corporations out of the UN system, she was eventually forced to resign in 1982. Since then, she has stayed active on these and other issues – lecturing, writing and advising – but out of official circles.

Erna was also a friend of GRAIN. We would like to share with you one particular profound and lucid reflection that she wrote for our magazine Seedling back in 2002. Upon our invitation, she had just participated in one of the final intergovernmental negotiating sessions that lead to the adoption of the FAO Seed Treaty. It was the first time in two decades that Erna went to an FAO meeting, and she was disturbed by what she saw. Written 10 years ago, her reflections on the privatisation of seeds, and who is defending whose interests, are as relevant and valid today as they were then.

You can read her story here.

For many of us, Erna was first and foremost a revolutionary. She will live on in our hearts.

Below is the 1986 documentary 'Fragile Harvest' (produced by Kensington TV in association with the National Film Board of Canada and the Canadian Broadcasting Corporation), in which Erna appears at 6:20, 12:30 and 45:00 minutes. Other familiar (and young!) faces such as those of  Malaku Worede and Pat Mooney appear as well. The message of this 25 year old  documentary hasn't lost any of its relevance.