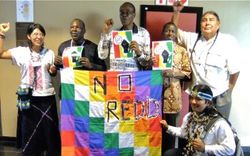 DURBAN, South Africa, Dec 12, 2011 (Tierramérica) - A new coalition of indigenous peoples and local communities called for a moratorium on Reducing Emissions from Deforestation and Forest Degradation (REDD) programs, a key part of the negotiations for a new international climate treaty that took place over the last two weeks in South Africa.

The new Global Alliance of Indigenous Peoples and Local Communities against REDD and for Life issued a statement stating that based on "in-depth investigations, a growing number of recent reports provide evidence that indigenous peoples are being subjected to violations of their rights as a result of the implementation of REDD+-type programs and policies."

"Indigenous peoples and local forest communities will not place our lives and lands in the hands of corporate polluters," said Tom Goldtooth, executive director of the Indigenous Environmental Network, based in the United States.

Berenice Sánchez of the MesoAmerican Indigenous Women’s BioDiversity Network in Mexico added: "We demand an immediate halt to all REDD and REDD+ programs in the world. It is a new form of colonialism."

Deforestation currently contributes 15 to 20 percent of global emissions of the "greenhouse gases" that cause climate change, such as carbon dioxide (CO2).


(Also, check out this passionate speech to the COP-17 delegates from Anjali Appadurai, a student at the College of the Atlantic in Maine, who addressed the conference on behalf of youth delegates. Just after her speech, she led a mic check from the stage — a move inspired by the Occupy Wall Street protests.)

According to the United Nations, REDD is an effort to create a financial value for the carbon stored in forests, offering incentives for developing countries to reduce emissions from forested lands and invest in low-carbon paths to sustainable development. REDD+ goes beyond deforestation and forest degradation, and includes the role of conservation, sustainable management of forests and enhancement of forest carbon stocks.

"This is not a solution to climate change," Sánchez told Tierramérica. "The same extractive industries are involved and it allows them to continue raping Mother Earth."

Sánchez, Goldtooth and many other indigenous and other members of civil society spent the previous two weeks participating in the 17th Conference of the Parties to the United Nations Framework Convention on Climate Change (COP 17), which began in the eastern South African city of Durban on Nov. 28.

But as civil society representatives, they are only observers; it is the 193 countries here that negotiate all agreements.

The organisers of COP 17 decided to extend the talks for an additional two days, until Dec. 11, in a desperate attempt to make as much progress as possible towards a global agreement to combat climate change.

REDD is being promoted as a financial tool that could mobilise 10 to 30 billion dollars annually to protect forests from deforestation, and would be included in the elusive international agreement that will replace or extend the Kyoto Protocol, whose first commitment period ends in 2012.

Under the proposed REDD programs, countries and industries looking to reduce their carbon emissions from burning fossil fuels - the main cause of climate change - would pay to protect forests in tropical regions.

Trees take carbon out of the atmosphere and sequester or trap it for as long as the trees live. Under REDD, forest owners and communities offer carbon credits on an open market, and a steel, cement or coal-fired power company in the North could purchase those credits instead of reducing its carbon emissions.

Virtually all countries attending COP 17 want an international agreement on REDD to kick-start a flow of private and public capital they believe will protect forests and biodiversity, reduce carbon emissions and bring money and jobs to local people.

Seven Central African countries, seven donor partner countries and the European Commission issued a Joint Declaration of Intent in Durban to underscore the urgency of accelerating the implementation of REDD+ in the Congo Basin, the second largest tropical rainforest in the world.

Burundi, Cameroon, the Central African Republic, Chad, the Democratic Republic of Congo, the Republic of Congo and Rwanda pledged their commitment to scaling up REDD+ implementation, with financial support from Australia, Canada, France, Germany, Norway, the United Kingdom and the United States.

Henri Djombo, minister of Sustainable Development, Forest Economics and Environment of the Republic of Congo, expressed the hope that "important financial resources" would be made available in early 2012.

And the International Union for Conservation of Nature (IUCN) announced on Dec. 8 that Guatemala has taken an important step by recognising "wider land rights for indigenous peoples and local communities."

The newly proposed mechanism "now clarifies and recognises landholders through all types of law: historical documents, supplementary titles, property, land tenures and indigenous territories. This is very significant for REDD+, which in many countries is challenged because indigenous peoples and forest-dependent communities face insecure land and tenure rights," added Morales.

But according to Heriberta Hidalgo, an indigenous representative from northern Chile, "It is an attractive fantasy that REDD will help indigenous people secure land tenure."

Land ownership is one factor that makes REDD extremely complex.

In addition, it is difficult to measure carbon in forests and determine whether emissions reductions are "real and verifiable." There is also a widely recognised need to include "safeguards", or legal requirements that will ensure local people, forests and biodiversity are protected.

Putt's organisation favors REDD+ but wants REDD+ done right, which means very strong safeguards. But countries like Brazil, Indonesia and others have argued against strong safeguards as impractical and expensive.

In preliminary REDD projects in Mexico, the safeguards are not being followed. Indigenous peoples are supposed to be informed and give their consent, but that is not happening, says Sánchez. "Some people and communities have been told they would get a lot money and went out and got loans. Now they are indebted - and what can they do but sell their land," she said. "REDD is a mask for giant land grabs."

"We aren't duped by this," said Marlon Santi, former president of the powerful Confederation of Indigenous Nationalities of Ecuador (CONAIE). "Indigenous peoples have 40 years of experience with big corporations like Texaco, Shell and Rio Tinto, who promised a good life for us and destroyed our lands and communities," Santi told Tierramérica.

But not all indigenous and community groups agree with the REDD moratorium. Some groups, like the Coordinator of Indigenous Organisations of the Amazon River Basin (COICA), still want to explore if there is a way to safeguard REDD and get the revenue, Goldtooth said.

"Some others are already participating. But the moratorium was a consensus decision amongst those of us who are here," he added.

Rich countries are pushing hard for REDD in Durban, but there is no carbon market for forests, said Kate Dooley of FERN, an NGO with offices in Belgium and the United Kingdom.

In fact, the entire carbon market is falling apart, Dooley said. "Carbon prices have collapsed in Europe. Banks have shut down their carbon credit desks."

For his part, Wally Menne of Timberwatch South Africa remarked that the UN climate talks "continue to churn out proposals for all kinds of cockeyed schemes that carefully circumvent actually reducing the emission of greenhouse gases from fossil fuel-powered industrial activities."