More than 250 participants from thirty different countries gather in Mali for the first International farmers’ conference to stop land grabbing. Photos from the opening of the conference can be viewed here


Sélingué, Mali,  – Today, more than 250 participants, mainly representatives of farmers’ organisations, from thirty different countries gathered in Nyéléni Village, a centre for agro-ecology training built in a rural area near Sélingué, in Mali, to participate into the first International farmers’ conference to stop land grabbing. The Nyéléni village is a symbolic place, where the first international conference on Food Sovereignty was held in 2007. For three days, from the 17 to the 20 of November, participants are exchanging their experiences and creating alliances to stop the global land grab. 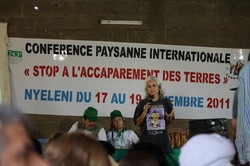 Land grabbing is happening everywhere, making the daily struggle of rural communities worldwide for survival even more difficult. Rights of family farmers, as well as pastoralists, artisanal fishers and indigenous communities, are violated constantly and their territories are being increasingly militarised. Small scale food production is replaced by large monoculture plantations for export and local farmers are left without land, without jobs, without food. This is why peasant organisations decided to mobilise together against this problem and create a space for exchanging experiences and finding common solutions. 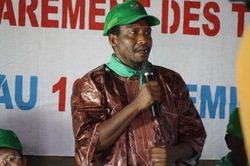 At the opening ceremony Ibrahima Coulibaly, president of the CNOP (National Confederation of Peasant Organisations) of Mali, said: “The land belongs to local communities and it has been like that for generations. Now, governments are pushing farmers off their lands. This is not acceptable. It is a denial of historic rights, rights that exist since hundreds of years, while many states exist only since the 1960s. This shows how politicians are not connected to the people. The situation is very serious, and that is why we are here. We have the possibility in these three days to sit together, find a common understanding and find the solutions.” 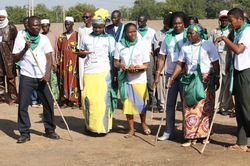 Since the global food and financial crises broke out in 2008, governments and private firms have been increas­ingly acquiring large areas of fertile land in foreign countries all around the world. More then 60 countries have been targeted by hundreds of private corporations and dozens of governments. This international “land rush” affects as least 30 million hectares in Africa alone.

During the initial debates, participants shared their experiences and presented a multifaceted image of land-grabbing. On the one hand, they agreed that land grabbing is not a completely new phenomenon, as most countries have suffered it through colonisation and in some places colonial legal systems persist until now. On the other hand, they noted that land grabbing can have different shapes and forms as well. There is state-led land grabbing and there are land grabs by transnational corporations. There are land grabs to produce food for export, to produce agrofuels, land grabs for mining or other large infrastructural projects, periurban land grabs and so on. But even at the local level, leaders and community chiefs grab land. There are also mechanisms within families and communities that result in land grabbing, such as men denying women access to land, the widespread discrimination against young and women farmers, and land grabs by local elites.

In Africa, 80% of the population are small-scale family farmers and even though their means of production may be rudimentary, as many of them do not own even a plough, they are still able to feed the majority of the people. As land grabs push small farmers and pastoralists off their lands, they directly undermine food sovereignty. 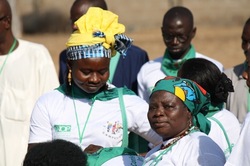 “When we lose the land we lose our culture, communities and knowledge. The land for us is everything,” said a farmer from Senegal. Other farmers shared testimonies of local struggles and expropriation of communities across Africa and worldwide.

“Farmers are being criminalised. Many of us are thrown into jail, only because we are trying to save our land and our way of life,” added a farmer from Indonesia.

“More than fifty compañeros and compañeras have died in the last year while defending their land. Today, our territories are completely militarised,” said a farmer from Honduras, talking about the struggle of local communities in Bajo Aguán.

Here in Mali, around 800,000 hectares of land have been leased or are under negotiation for lease. One farmer from Kolongo, in the Ségou region, where two investors have grabbed peoples’ land, Malibya and Tomota, explained his experience: “We have been living in our villages for hundreds of years, yet nobody came and told us about these projects. Then one day, this machine came and started to dig. They gave us a paper which we could not read. So we had to show it to somebody who could tell us what it said. The paper said that we had to leave our land and our farms. Then they started to build a canal. They dug up a cemetery, they robbed us of our harvest and ruined our land. We organised a forum in Kolongo one year ago and we are still struggling for our rights, but we are really suffering.” 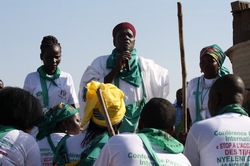 A woman farmer from the Office du Niger, where many different foreign investors have been grabbing lands, stood up and said: “We are really glad to be here today. In our villages, we are in real difficulty. The projects took away our lands, so we cannot produce food anymore. Due to the struggle, some of us are in jail and I myself had a miscarriage after I was beaten. We even had to send our children away, as there is no food. Now, we have no happiness but we are fighting for our future and for the coming generations. We came to this conference as we hope to struggle together.”

Every day, farmer and pastoralist communities are being expelled from their land. At the same time everywhere, resistance and new solutions are being developed to stop this massive land grabbing. In Senegal, since the recent conflict in Fanaye, which led to several deaths, farmers organisations, social movements, NGOs and human rights groups have set up a monitoring and alert committe to warn all civil society actors, journalists and decision makers whenever new land grabbing cases arise on the ground.

Participants agreed that this struggle to stop land grabbing is also a struggle to stop the ongoing commodification of seeds, water and knowledge and to support small-scale family farmers. Paul Nicholson, one of the leaders of La Via Campesina said: “Some people say that land grabbing is modernizing agriculture, and that it is the only solution to alleviating hunger. This is not true, what we need is food sovereignty. We must fight for our agroecological model, and we need policies that support family farmers everywhere. It is urgent to implement an agrarian reform all over the world.”