Note from GRAIN: Bird flu first broke out in Northern Vietnam at a massive industrial poultry farm owned by the Thai conglomerate Charoen Pokphand. By the time the government became aware of the outbreak, it had already spread far and wide and has since become endemic in the area. The FAO says it would like to see better information sharing between countries. Fine. But the problem is that most of the important information is in factory farms owned by the multinational poultry industry-- and they tend to keep this information to themselves. If the virus is mutating in a highly pathogenic form, it is likely that this is happening in such factory farms, where the conditions for mutations into new highly pathogenic forms are ideal. To effectively deal with the problem, you have to deal with the source, and nobody's doing that. 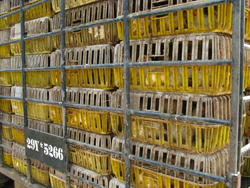 BANGKOK, Sep 24, 2011 (IPS) - Veterinary experts in China and Vietnam are scrambling to produce a vaccine capable of beating a new strain of the deadly avian influenza (AI) virus, reports an official of the Food and Agricultural Organisation (FAO).

"Every year vaccine producers in China review what type of AI strain should be addressed," says Wantanee Kalpravidh, regional coordinator of the U.N. agency’s centre for trans-boundary animal disease. "The existing vaccines used in domestic poultry have been able to cover changes in the AI virus from 2004 till 2010."

But detection of a "mutant strain" of the deadly virus in China and Vietnam has proved existing vaccines ineffective.

"They (existing vaccines) are unable to protect poultry from the new strain," Wantanee told IPS. "Researchers in China and Vietnam are working on a new vaccine."

Wantanee said the emergence of the mutant variety "confirms that the AI virus strain is changing, mixing and re-assorting." She added that the virus was becoming "more virulent."

The new strain has emerged despite inoculation efforts, mass culling of infected poultry and implementation of bio-security measures in chicken farms across Southeast Asia, the epicentre of the deadly virus that saw a drop in AI outbreaks in 2008.

Blame now falls on Vietnamese authorities who suspended the mass vaccination of poultry this spring in the country’s north and east, despite the bird flu being endemic in both regions.

"The reason forwarded by the government of Vietnam is that the vaccines currently available are not able to adequately protect against some of the newly emergent virus strains detected in the north and the east," states the FAO’s Vietnam office.

"However, in 2011, Vietnam used a stock of 50 million doses of vaccine in the south, where this new virus strain has not been detected yet," the statement went on to say.

The consequence of Vietnam’s breach was felt in poultry farms across the country’s north and eastern regions, where thousands of chickens died from the "mutant strain" of H5N1bird fly virus, identified as H5N1-2.3.2.1.

The suspension of Vietnam’s springtime vaccination campaign breached a fairly steady effort to inoculate poultry twice a year since it first adopted a vaccination policy against bird flu in 2005.

Vietnam’s suspension of poultry vaccination also sets it apart from the other bird flu-endemic countries – such as Bangladesh, China, Egypt, India and Indonesia – none of which halted ongoing vaccination campaigns.

While its animal health experts and researchers work on a new vaccine, Vietnam is yet to announce plans to resume vaccinating poultry in the coming months.

China is playing down concerns about a mutant strain of H5N1, stating that the current outbreak has been detected among the wild birds, but admits that "some mutations of the virus" have been detected in poultry.

"Agriculture and health authorities are constantly on high alert of potential bird flu epidemics among poultry and humans," states Yu Kangzhen, the country’s top veterinarian, according to the English language ‘China Daily’ newspaper.

But the FAO is pursuing a different tack, making an appeal to countries in the region for better information exchange after the emergence of the new sub-strain in late August.

"We want countries to keep sharing virus information with the FAO," says Wantanee. "Countries like Cambodia and Laos need support to monitor their poultry, including strengthening the surveillance mechanisms."

It is a concern that has resonated with the region’s governments. Calls to protect the local poultry industry from the new AI sub-strain have triggered extra vigilance in the Philippines, which stands out as a bird flu-free country in a region considered endemic for the virus.

"The Philippines remains free from bird flu and we want to maintain that status," Efren Nuestro, director of animal husbandry, told reporters in Manila after authorising, on Sep. 1, a quarantine order and a nationwide watch on imported poultry and wild birds,

"All undocumented poultry shipments will be automatically destroyed," Nuestro was reported as saying. The measures will help the Philippines maintain its record of not having a single human case of AI since a deadly strain was detected in 2003.

In Indonesia, which has recorded 146 of the 331 deaths worldwide from the H5N1 bird flu virus, strengthening domestic surveillance and research to combat AI is now back on the national agenda.

"We still need more funds especially for research activities," health minister Endang Rahayu Sedyanhingsih said on Sep. 14, at global health security meeting co-hosted by the World Health Organisation (WHO) and the Indonesian government. "We should stay on guard."

Thailand, where the virus was eliminated through culling and stringent bio-security measures, is now assessing inventories of Tamiflu, an influenza drug prescribed to patients. The country currently has 20 million doses in its national stockpile.

Vietnam has been the second worst hit country in the region after Indonesia, with 59 deaths out of a reported 119 people infected. The blow to the country’s poultry industry this year comes on top of the estimated 63 million chickens that have been culled since 2004.

Cambodia, an impoverished country with limited resources to monitor AI, provides a grim reminder of H5N1’s fatality. This year has seen eight people die from the AI, the most recent fatality being that of a six-year-old girl in August. Since 2005, Cambodia has recorded 15 deaths.