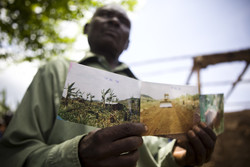 The data set is available in HTML below, in XLS and PDF formats and in this interactive global map of land grabs created by Varun Mangla / Circle of Blue.

This is not an exhaustive list of all land deals. It focuses only on those deals that:

Deals for sugar cane and palm oil production were included but not those for crops like jatropha or cotton.

The collection of deals provides a stark snapshot of how agribusiness has been rapidly expanding across the globe since the food and financial crises of 2008 and how this is taking food production out of the hands of farmers and local communities.

It confirms that Africa is the primary target of the land grabs, but it also underlines the importance of Latin America, Asia and Eastern Europe, demonstrating that this is a global phenomenon.

The data set also paints a clear picture of who the land grabbers are. While most of the 298 land grabbers documented are from the agribusiness sector, financial companies and sovereign wealth funds are responsible for about a third of the deals. And on many occasions there is overlap. For instance, the data set shows how Cargill, one of the world's largest agribusiness companies, has been acquiring hundreds of thousands of hectares of farmland through its hedge fund Black River Asset Management.

European and Asian based investors account for about two thirds of the land grabs within the data set. China and India are major sources of land grabbers, as are the UK and Germany. But the UK, much like Singapore and Mauritius, serves as a tax haven for land grabbers, and often the true operating bases of the companies reside elsewhere. Other major centres of land grabbers are the US, which tops the list at 41 cases, and the UAE and Saudi Arabia with 39 combined.

This table is based on data available to us, most of it collected from the website farmlandgrab.org. It has not been verified against realities on the ground. It is also a summary, and as such doesn't capture all nuances and details. Sources are available on request.

The data set is available in HTML below and in XLS and PDF formats. This interactive global map of land grabs created by Varun Mangla / Circle of Blue is one example of how the data is being used. Please contact us if you know of others or would like to suggest one.