GRAIN calls for end to land grabbing at Swedish Parliament On 5 December 2011, GRAIN received the 2011 Right Livelihood Award, often referred to as the ‘Alternative Nobel Prize’, at the Swedish Parliament in Stockholm. GRAIN was awarded “for its worldwide work to protect the livelihoods and rights of farming communities and to expose the massive purchases of farmland in developing countries by foreign financial interests”. GRAIN seized on the opportunity to demand an immediate end to land grabbing and a restitution of lands to local communities. The following speech was delivered to the Swedish Parliament by GRAIN coordinator Henk Hobbelink during the Awards Ceremony.

Time to recall the land grabbers

Three weeks ago, on the 16th of November, Cristian Ferreyra was shot dead by two masked men in front of his house and his family. Cristian lived in San Antonio, a village north of Santiago del Estero in Argentina. He was part of an indigenous community, and member of one of our partners, the indigenous peasant organisation MOCASE Via Campesina. His "crime"? To refuse to leave his homeland in order to make way for a massive soybean plantation, one of so many that have been encroaching on rural communities throughout Argentina in the last decade. So the plantation owners had him assassinated. Cristian was only 25 years old.

Six weeks ago, on 26 October, one farmer died and 21 others were injured, ten of them critically, in the village of Fanaye in northern Senegal. They, too, were trying to stop the takeover of their lands. Government officials had handed over 20,000 hectares surrounding their area to an Italian  businessman who wanted to grow sweet potatoes and sunflowers to produce biofuels for European cars. The project would displace whole villages, destroy grazing areas for cattle and desecrate the local cemeteries and mosques. Fanaye is not an isolated case. Over the past few years, nearly half a million hectares in Senegal have been signed away to foreign agribusiness companies. 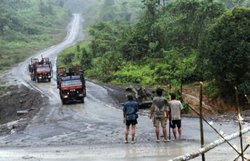 Gambela is a region in Ethiopia that borders South Sudan. It is home to one of the most extreme cases of landgrabbing in the world. Over half of all the arable land in the region has been signed away to Indian, Saudi and other investors who are now busy moving the tractors in and moving the  people out. Ethiopia is in the midst of a severe food crisis and is heavily dependent on food aid to feed its people. Yet, the government has already signed away about 10% of the country's entire agricultural area to foreign investors to produce commodities for the international market. Earlier this year, we were involved in the production of a video on the situation of the indigenous Anuak peoples in Gambela who now face losing their farms, their villages and their ancestral territories. We wanted to help raise their voices to the international level, but in the video we had to distort their voices and hide their faces – to protect them from backlash by the Ethiopian government.

One could continue with many more examples of how people who just want to grow food and make a living from the land are being expelled, criminalised, and sometimes killed, to make room for the  production of commodities and someone else's wealth. Today, we are witnessing nothing less than a frontal assault on the world's peasantry. This is not only happening in the global South. Here in the European Union, we have lost three million farms since 2003. This amounts to a loss of one fifth of all our farms in just eight years. Living from the land is becoming more difficult and, in many parts of the world, more dangerous by the day. Peasants who have been feeding t 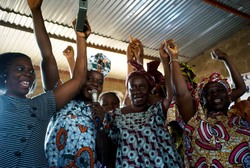 he world for thousands of years – and still are – are now increasingly being cast as backwards, inefficient and obstacles to development. The not-so-subtle  message is: they should cease to exist.

GRAIN was established two decades ago to help stem the loss of the world's agricultural biodiversity, and people's traditional knowledge associated with it. We learned, however, that the problem was not so much the loss of indigenous seeds and breeds as it was about the loss of the people who create, nurture and sustain that diversity. "Genetic erosion", as we called it 20 years ago, is really just a consequence of a larger development that is promoting industrial farming and leading to the annihilation of the world's rural peoples.

But these people, all over the world, are fighting back. In all corners of the globe there are dynamic movements of resistance and rebuilding, where people are struggling to hold on to their territories and keep control over their resilient food systems.

Farmers cool and feed the world

Via Campesina, the international peasant movement, has called today, the 5th of December, the "International food sovereignty day to cool down the earth". Right now, Via Campesina members and 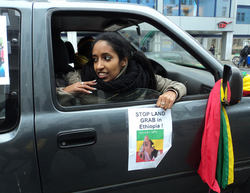 allies are out in the streets of Durban, South Africa, protesting the negotiations over false solutions  to climate change, and insisting that small farmers can not only cool the world but they can feed it too. They are right.

The basic idea of food sovereignty is that the aspirations and needs of those who produce, distribute and consume food should be at the heart of our food systems, rather than the demands of transnational corporations. It prioritises local food production, based on agro-ecology and family farming, and local markets. It keeps seeds and biodiversity in the hands of farming communities, and GMO free. It nurtures and builds on indigenous knowledge of soils, seeds and farming systems. It recognizes the crucial and central role of women.

The world desperately needs food sovereignty. It is our best hope to solve the planet's most pressing crises. Today, over a billion people on the planet do not have enough food to eat. Around 80% of these people are food producers living in the countryside. This intolerable situation is not due to a lack of food or technology. It is due to government policies that deliberately replace peasant agriculture with an industrial model driven by the needs of transnational corporations. This model produces commodities for the global market. It does not and cannot feed people. 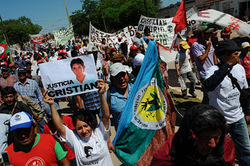 We are all acutely aware of the climate crisis. But how many people realise that the current industrial food system contributes around half of all global greenhouse gas emissions? You get this figure if you add up the emissions from agriculture itself, plus the change in land use when forests are turned into plantations, plus the enormous distances that food and feed are transported around the globe, plus the energy that goes into processing and freezing, plus the waste of energy and food in the increasingly centralised supermarket chains. Food sovereignty, which prioritises agro-ecological farming and local markets, can massively reduce these emissions. GRAIN has calculated that just by focusing on soil fertility restoration in agricultural lands, we could offset between one-quarter and one-third of all current global annual greenhouse gas emissions! Small farmers can indeed cool the world.

They can also feed the world. Earlier this year, the United Nations Special Rapporteur on the Right to Food presented a report showing that agro-ecology, if sufficiently supported, can double food production in entire regions within 10 years while mitigating climate change and alleviating rural poverty. Others have shown that policies oriented towards promoting local markets, short circuits and peasant farming, all help to do the same. The issue is as simple as keeping food in the hands of people, rather than corporations.

Still, peasants, fishers and other food producers have never been more in danger of extinction.

Never before has so much money gone into the industrial food system. The last decade has witnessed a spectacular increase in speculation on the food commodity markets, sending up food prices everywhere. With today's global financial and economic crises, speculative capital is searching for safe places to multiply. Food and farmland are such places. "Everyone has to eat," is the new mantra preached in board rooms. The race is on to take control over the world's food-producing resources -- seeds, water and land -- and the global distribution of food. Today, much of those resources and food systems are still in the hands of the poor. For example, 90% of India's milk market, the largest in the world, is in the hands of millions of small dairy farmers and vendors who collect milk and bring it fresh to consumers. These are the kind of markets that corporations, banks and investors now want to take over.

Money is also flowing directly into farming and land acquisition. Banks, investment houses and pension funds are actively buying up farmland all over the world. The data and the contracts are very hard to get hold of, but current estimates are that 60-80 million hectares of land have fallen under the control of foreign investors for the production of food in the last few years only. This is equal to half the farmland of all the EU! Most of this is happening in Africa, where people's customary rights to land are being grossly ignored.

This latest trend in global land grabbing -- that for outsourced food production -- is only one part of a larger attack on land, territories and resources. Land grabs for mining, tourism, biofuels, dam construction, infrastructure projects, timber and now carbon trading are all part of the same process, turning farmers into refugees on their own land.

There is much to be done. But GRAIN would like to use this opportunity, here in the Swedish Parliament, to call for one specific action. We want an immediate end to the global farmland grab -- an urgent and massive "recall" of land grabbers, like what food safety authorities do to get contaminated food out of the food supply. We call on everyone to do whatever is possible to stop the international flow of money for the global acquisition of farmland. And to restitute lands to all affected rural communities. Stopping land grabbing is not just about what is legal. It is about what is just.

Here in Sweden, people can start by taking on companies, like Black Earth Farming, which have bought or leased farmland overseas. They are not allowed to do this here in Sweden and should not be permitted to do so abroad. Campaigns can be launched to pressure Swedfund, which is using taxpayers' money to finance the land grabber Addax in Sierra Leone. The Swedish pension fund  AP2 is also going into global far 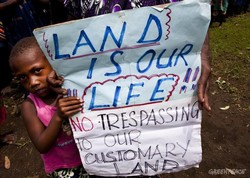 mland acquisitions as a new strategy to supposedly protect the retirement savings of working Swedes. Swedish development aid projects ought to be scrutinised, as there are already indications that some are promoting land grabbing activities in Mozambique and elsewhere. Such actions and campaigns are already brewing in other parts of Europe and in the US. These should be strengthened and supported, to stop land grabbing at the source.

Rural communities have fed the world for millennia. Today, the massive expansion of large scale industrial farming is destroying our capacity to move on. At GRAIN, we will continue exposing what is going wrong, while fighting for an equitable, just and sustainable food system together with peasant organisations and others social movements. This award gives this struggle a tremendous boost. We see it not only as an acknowledgement of our work but also as a powerful recognition of the contributions of countless people and organisations engaged in the struggle for genuine community-based food sovereignty. Together, we will continue this struggle. We have no other option if we are to survive on this planet with some dignity.

Thank you very much. For this award, and for your attention.