Large tract of forest in Papua that has been cleared for the Merauke Integrated Food and Energy Estate (MIFEE). Photo: GRAIN, 2016

A briefing paper from an international network documents that Indonesia’s new “Food Estate Program” on the islands of Borneo, Sumatra and Papua threaten Indigenous sovereignty, forests and biodiversity, will cause hunger and contribute to the climate crisis.
The Program threatens some of the world’s most biologically diverse habitats and will result in land grabs and human rights abuses. The military is already implementing the Program Borneo’s Kalimantan area. The Government claims the Program will help Indonesia’s food crisis and COVID-19 economic problems. In reality, the Program will make these problems worse.
The Government’s plans are vague but the network estimates the Food Estate Program threatens:
Indonesia’s Defence Minister Prabowo Subianto is leading the Food Estate program. He is a would-be strong man previously expelled from the Army for organizing the kidnapping and torture of pro-democracy activists. Despite 2004 reforms, Indonesia’s Army is involved in agribusiness and other industries it uses for self-financing, often leading to corruption. In 2020, PT Agro Industrial Nasional’s involvement in export licence corruption led to the arrest of the Minister of Maritime Affairs and Fisheries, Edhy Prabowo (also a key member of Prabowo Subianto’s Gerindra Party) following an investigation by the Corruption Eradication Commission.
The network warns financial institutions seeking to invest in the Food Estate Program that the Program also lacks transparency and accountability. 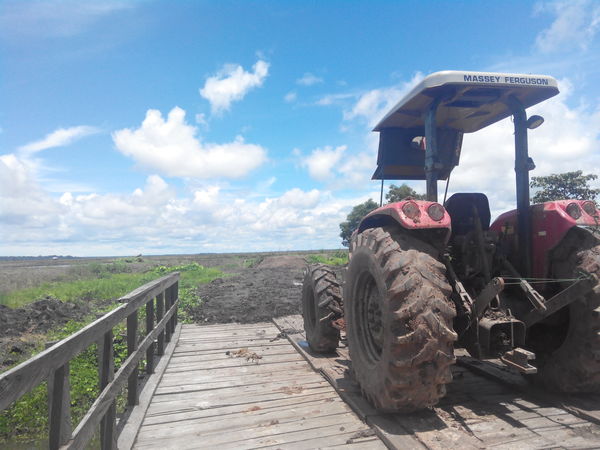 Large scale plantations such as food estates actually make it difficult for Indigenous communities in Papua to find food, as they lose the forest while the crops are sold into the export market, and not made available for the villagers. Photo: GRAIN, 2016
Indonesia’s history with food estates provides lessons learned. Prior projects caused massive environmental destruction and human rights abuses – being repeated now, in 2021 with the new Food Estate Program. The disastrous Mega Rice Project and the 2010 Merauke Integrated Food and Energy Estate (MIFEE) in Papua failed to deliver the promised results.
Financial institutions must refrain from funding the Food Estates. Local communities and civil society organisations have documented that converting forests and community lands to industrial agriculture destroys ecosystems and sacrifices the livelihood of Indigenous People in Indonesia. Forests are necessary for the physical and spiritual survival of Indigenous People who view themselves as part of nature. Destroying the forests threatens Indigenous Peoples’ existence. The Food Estates will not empower small local food producers. These projects are ignoring the rights of local people and their own local food patterns.
Link to the full report in English
Summary in Bahasa Indonesia
Summary in Chinese
Summary in Japanese
Summary in Korean
Summary in German