by GRAIN | 6 Dec 2022
Supermarket Asia Bulletin #28 - December 2022
Editorial
One-fifth of total food system emissions comes from global food miles
Food and agriculture occupied a central place at this year's climate negotiations in Egypt. Awareness of the industrial food system's major contribution to global greenhouse gas emissions is growing-- and so too is the presence of agribusiness lobbyists at the climate negotiations. It is now widely accepted that the industrial food system is responsible for at least a third of global emissions, and new research published in June 2022 indicates that a big chunk of these emissions (around 20 percent) are caused by transporting food around the world.
According to the study, food transportation accounts for nearly half of all direct emissions from road vehicles. Based on an assessment of 74 countries of origin and destination, the number of emissions linked to trucks, ships, trains and aeroplanes carting food and agriculture products around the world is seven times higher than what the experts previously estimated. Food mile emissions are mainly caused by high-income countries, with only eight countries (US, China, Japan, Germany, UK, India, Russia and Brazil) collectively accounting for almost half of all food-miles emissions.
The study underlines the importance of eating locally grown produce. In the middle of today’s food, climate and energy crises, cutting back on the transportation of food is critical to prevent the world from sliding further into disaster.
Food miles are not the only source of emissions from the food system that we need to deal with-- but they must be addressed if we are going to create a sustainable system of food production and consumption. We must both strengthen agroecological farming and shorten the distance between people and their food while at the same time cutting back on the overconsumption of high emission foods like industrial meat and dairy and ultra-processed foods. This means putting an end to corporate control over the food system and the dominance of neoliberal trade agreements so that we can move towards decentralised community-led food systems.
Across the region
Is the ‘solidarity economy’ an alternative for China’s urban food supply? 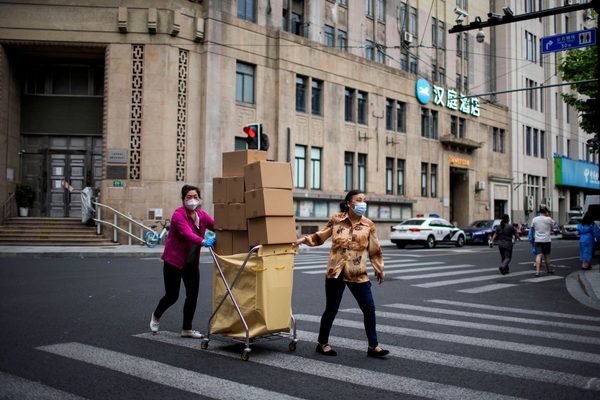 Women carry boxes of food on the street of Shanghai during lockdown. Photo: Aly Song/Alamy 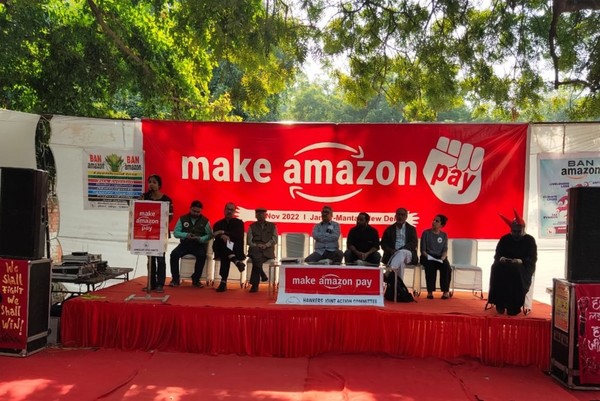 The Make Amazon Pay coalition launched a massive day of global action against Amazon on 25 November 2022-- a day known as "Black Friday" and that is generally the busiest shopping day of the year because of the discounts offered by retailers and its proximity to Christmas. The campaign, which saw strikes and protests in over 30 countries worldwide, accused Amazon of “squeezing every last drop it can” from “workers, communities and the planet” in the midst of a cost-of-living scandal, global debt crisis and climate emergency.

The Make Amazon Pay coalition, co-convened by UNI Global Union and Progressive International, comprises over 80 trade unions, civil society organisations, environmentalists and tax watchdogs. The coalition demands Amazon pay its workers fairly, respect their right to join unions, pay its fair share of taxes and commit to real environmental sustainability.
This is the third year that the Make Amazon Pay coalition has organised a global day of action on Black Friday. Highlights from this year's actions include:
● In France and Germany, trade union Verdi and CGT organised workers' strikes in 18 Amazon warehouses;
● In the United States, workers at an Amazon facility in St Peters, Missouri, walked off their jobs, while unions representing retail workers in New York City staged demonstrations outside Amazon owner Jeff Bezos’s apartment building;
● In Japan, workers from the recently formed Amazon Workers Union protested in front of the headquarters of Amazon Japan LLC in Meguro, Tokyo;
● In Bangladesh, thousands of garment workers in Amazon’s supply chain rallied and marched for union recognition, better pay and conditions and for Amazon to sign the Bangladesh Accord on Fire and Building Safety.
● In India, actions took place in states across the country. In Delhi, an action at Jantar Mantar brought together organisations across sectors, including Joint Action Committee against Foreign Retail and e-commerce, Bharatiya Udyog Vyapar Mandal, Confederation of All India Traders, Federation of All India Vyapar Mandal, IT for Change, Hawkers Joint Action Committee, Gig workers Association, Amazon India Workers Association, and many others.
The key demands from the coalition include demands from Amazon warehouse workers, gig workers and street vendors. They called on Amazon to pay workers fairly with reasonable working hours and to provide basic necessities for workers such as rest time and adequate restrooms, separately for men and women workers. And they also called for the recognition of all delivery drivers as workers entitled to social protection, for the implementation of the street vendors act and for all street vendors to be provided vending licenses.
Dharmendra Kumar, Co-convenor Joint Action Committee against Foreign Retail and E-commerce said that “Amazon is lowering working standards in India across the board. It is based on a business model which is ecologically disastrous and economically unviable, squeezing all -including workers- across the supply chain, small and independent traders, street vendors, communities, and the planet.”
Parminder Jeet Sigh, Executive Director at IT for Change explained how Amazon represents a new type of corporation. “Like Uber in transport, and others that are coming in-home services, agriculture etc., which produce nothing, provide no real new service, but just represent a new model of data-and intelligence-based control and management...They do this remotely. Thus, they become a new form of the most intensive exploitation ever seen before, even worse than traditional corporations. There should be a new model of cooperative governance of these corporations, through unions of those whose production and services they manage.”
UNI Global Union’s General Secretary, Christy Hoffman, stated that “today, unions, civil society and progressive elected officials will stand shoulder to shoulder in a massive global day of action to denounce Amazon’s despicable multimillion-dollar campaigns to kill worker-led union efforts. It’s time for the tech giant to cease its awful, unsafe practices immediately, respect the law and negotiate with the workers who want to make their jobs better.”
For more information, please visit MakeAmazonPay.com and contact Dharmendra Kumar [email protected] and Varsha Gandikota [email protected]
To read the Make Amazon Pay coalition’s 25 Common Demands, please see https://cloud.progressive.international/s/W9Td3D592F5NY4x
From the news
Can Japan feed itself?
Leo Lewis and Kana Inagaki, Financial Times
At the end of September, in supermarkets across Japan, regular staff and a secret army of wholesalers worked the shelves through the night on a project that none of them — from national chains to local stores — were able to talk about openly. When the food retail industry’s collective doors opened on October 1, shoppers who had barely experienced inflation since the early 1990s were hit by the most severe price shock in almost two generations. The prices of more than 6,000 daily food items soared overnight; so too, say experts whose warnings have long gone unheeded, did the Japanese public’s realisation of what it means to depend upon the most vulnerable food supply system in the developed world.
Japan’s high-quality, low self-sufficiency food system has always been a proxy for the march of globalisation. It could now become a proxy for its reversal.
Bangkok street vendors fear new governor's relocation plan
Kosuke Inoue, Asia Nikkei
The Thai capital, famous for its street food stalls and the wafting aromas they send out, has pitted its sidewalk chefs against its new governor. The informal eateries want to stay put, but Governor Chadchart Sittipunt, who took office in June, intends to round them up in outdoor markets modelled on Singapore's "hawker centres." Street food purveyors, however, fear their customers will not follow them.
Street vending is also a job. South Korean street vendors rally for livelihood protection law (article in Korean)
Kim Do Kyun, Money Today
On June 13, hundreds of street vendors from The National Alliance of Democratic Street Vendors, the National Alliance of Street Vendors, and the Solidarity for Reform rallied in front of the South Korea National Assembly.
The organisations said: "The problems faced by street vendors are social and structural problems, and due to the recent impact of COVID-19, the income of street vendors has decreased and the business has been completely closed." They demanded the enactment of a special law on livelihood protection for street vendors, discontinuation of street vendor management measures and discontinuation of excessive fines.
Travis Kalanick expands ‘dark kitchens’ venture across Latin America
David Lee and Michael Pooler, Financial Times

Travis Kalanick, former Uber CEO and co-founder has quietly built a large food and convenience goods business across Latin America as he seeks to capitalise on the region’s fast-growing e-commerce market. The billionaire has rapidly expanded his US-based CloudKitchens start-up by buying and building local “dark kitchens” in Latin America over the past three years as part of an attempt to build a worldwide network of food delivery centres, leveraging his experience of building Uber Eats during his tenure as chief executive.
Microsoft is the first US-based investor known to have backed CloudKitchens. The investment was part of CloudKitchens’ $US850 million funding round, a combination of debt and equity that valued the company at $US15 billion.
Supermarket watch Asia is a quarterly email bulletin for social movements about developments in food retail and distribution in Asia produced by GRAIN. Click here to subscribe.
Author: GRAIN
Links in this article: