by Ceccam, GRAIN, La UACMilpa, Taller en Defensa de los Territorios | 14 Jan 2022
Full report available here (Spanish only): Territorios del agua: la defensa de los ámbitos de comunidad en la Sierra de Puebla-Hidalgo y la historia compartida de sus pueblos (ante el gasoducto Tuxpan-Tula GRAIN, Ceccam, La UACMilpa, Taller en Defensa de los Territorios, 2021
Historical and anthropological research often serves academic objectives and concerns but does not nurture the transformations that communities seek in their urgent resistance struggles. Those who contribute locally to such research are “marginalised”, as mere “informants.” The real and complex history of the people living in such regions frequently gets erased because outsiders decide the focus.
In contrast, when working on a participatory research process civil society organisations, movements, and communities make efforts to shape a collective, historic and current diagnosis of the conditions weighing on a particular region, and if possible, their more holistic, geopolitical implications. Moreover, these research processes build bridges with other movements struggling in other regions for the same reasons, connecting and uncovering corporate and government plans and investments and their nuances.
This document on Territories of Water, tells the story of communities in the Puebla-Hidalgo Sierra that defend their water commons (against the Tuxpan-Tula gas pipeline). We stress the fact that it was built through participation as a multi-layered research piece. Its intention is to return its findings to the communities from which these voices emerged to serve as a transformation tool. Bringing together the scattered fragments and details of the various circumstances involved, was a collective work for reconstituting the role of the communities and persons who live in this intersection of the sierras between Puebla and Hidalgo in North-eastern Mexico. 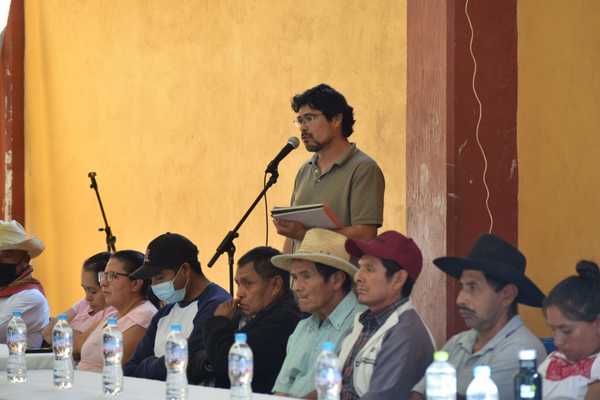 Itzam Pineda from UACMilpa closing the presentation with the conclusions. At the table several members of the Consejo Regional de Pueblos Originarios en Defensa de los Territorios de Puebla-Hidalgo (Regional Council of Indigenous Peoples in Defence of the Territories of Puebla-Hidalgo). Photo: Clarissa Torresblanca
The document reflects the process of deep reflection (legal, historical, anthropological, and about what it means to live in these spurs). It reflects the resistance to the threat that looms over this corner of the world: the Tuxpan-Tula gas pipeline and the company that has been trying to activate it for at least six years, TransCanada, now transformed into TC-Energy. This is a company that has a string of irregularities against Otomi, Nahua, Tepehua and Totonaca communities in Mexico, and against Wet'suwet'en communities in the Canadian Pacific.[1]
Since the end of 2017, Otomi, Nahua, and Tepehua communities in the Sierra region known as Puebla-Hidalgo had already gathered in local indigenous councils and then in the Consejo Regional de Pueblos Originarios en Defensa del Territorio de Puebla e Hidalgo [Regional Council of Indigenous Peoples in Defence of the Territory of Puebla and Hidalgo]. The latter is the result of a grassroots network of villages, localities, communities, and ejidos that, knowing they will be affected by the gas pipeline, began to organise their understanding of the damage that the crossing of the gas pipeline will cause. The above led them to undertake a series of legal actions to stop the pipeline and the company's schemes. At least three of these defensive legal actions (writs of amparo) have been won and still stand.
In these organisational and legal actions — and in the face of absurd legal doubts that there were indigenous peoples in the area — a group of researchers, all activists, professors at the Universidad Autónoma de la Ciudad de México (UACM), at the Instituto Nacional de Antropología e Historia, and researchers from the Centro de Estudios para el Cambio en el Campo Mexicano (Ceccam), the Universidad Nacional Autónoma (UNAM) and GRAIN undertook a participatory and collaborative exercise talking with the communities and listening to their testimonies, reflections, and stories, weaving their history with their current views of what the pipeline means to them.
It would have been challenging to conduct research with all the locations through which the pipeline will cross. The pipeline is a private line, 36 inches in diameter, aiming to transport 886 million cubic feet per day of natural gas from Texas in the United States along 263 kilometres. Although its useful life will be 25 to 30 years, it will affect at least 260,000 people from 459 localities in 34 municipalities in Veracruz, Puebla, Hidalgo, and the State of Mexico.
This portrait was woven with communities considered to be directly affected, which undeniably maintain an active, living relationship with the rest of the localities that will be affected, including 444 communities that the government excluded from any legal consideration. Nonetheless, the regional portrait acquires spatial volume, geographical configuration, and a long and short-term historic background, with panoramic regional scope and many local details from various corners of that territory.
This type of research, approached from below, systematises and assembles the apparently scattered fragments of what Chila, San Pablito Pahuatlán, San Nicolás Tolentino, Montellano, Ahuacatitla, Cuautepec, San Antonio el Grande, San Andrés, but also Zoyatla, Aguacatitla, Tlacuilotepec, Honey, Cuauneutla, Cruzanta, Tlacruz, and other communities managed to express: stories, experiences, testimonies, collective memory, organisational understanding, legal and political vision, and something that escapes many “social” or political investigations: the relationship with “the sacred”, the ontological basis that reveals deep, centuries-old bonds. 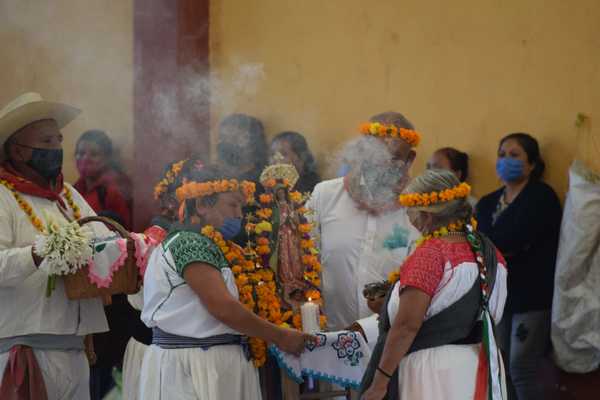