by GRAIN | 8 Oct 2021
Supermarket Asia bulletin #23 - September 2021
Editorial
Organising informal traders and local markets
Those who work tirelessly with informal traders, street vendors and local markets always emphasise the importance of and need of organising. From the fight against farm bills in India that give big retailers more access and control over food distribution to the fight against bias and unjust Covid prevention measures that regard fresh markets as culprits that must be closed down, it all takes constant effort organising with and among small traders. All the various fights also reveal the vital contribution market traders and street vendors make to the larger struggle for a better food system.
Market traders and street vendors are essential workers and are an important part of the economy but are rarely seen as such. In its report on the 'Informal Food Sector’, the UN's FAO emphasises the important presence of informal workers in the food supply. They not only support their families but also connect small food producers, farmers, fishers, and home industries to consumers, especially low middle-income consumers.
According to the FAO, while modern food supply networks are developing in urban areas, traditional and usually informal food supply and distribution activities continue to play an important role, as they are best at satisfying the specific food needs of poor urban households. They also provide employment and income to low-income households, particularly women. In Bangkok, for example, two-thirds of food vendors are women. And it is therefore essential that these activities be duly recognised and supported by the local authorities. But recognition and support from local authorities do not come easy. Small traders have to fight for it, and this requires organising.
In this bulletin, we talked with a community organiser who has worked for more than a decade with fresh market traders and street vendors. He shares their experiences and gives their perspectives on what is needed to build a better and just food distribution system. Their experiences are particularly important for Asia, where fresh markets and street vendors still dominate food distribution, despite the push by big retail stores and e-commerce to marginalise them. In the face of this onslaught, traders and street vendors are building up their collective fight with others in the community.
Head banner: fruit seller in Phnom Phen, creative common
Across the region
Organising fresh market traders in Jogjakarta and other cities in Indonesia. Interview with Istianto Ariwibowo of Sekolah Pasar 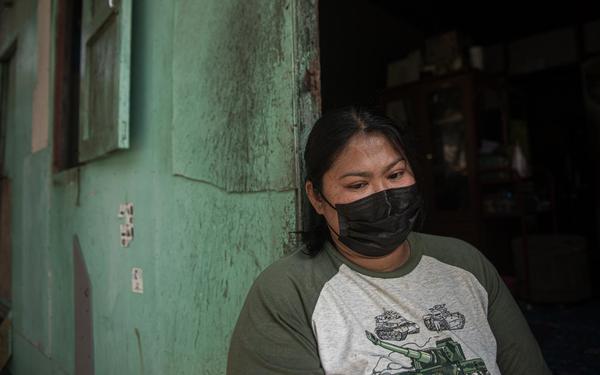 Migrant worker in Thai shrimp industry. Photo: Patipat Janthong/OXFAM
Inequality is worsening and exploitation of women is endemic across the global economy. While inequality of power and value was already deeply unfair before the pandemic, it has now reached shocking proportions. COVID-19 has cost global workers $3.7 trillion in lost income, and women and young workers have been hardest hit, as they are often found in the most insecure and lowest-paid jobs. Few places reveal this trend more clearly than supermarket supply chains.
In stark contrast to the escalating human misery brought by the pandemic, the supermarket sector has largely been the standout winner of the crisis. Senior executives, the largest institutional investors, and mostly wealthy shareholders of global supermarkets continue to be rewarded with ‘business-as-usual’ high compensation and dividends.
In fact, during the pandemic, publicly listed supermarkets distributed 98% of net profits to their shareholders via dividends and share buybacks. Meanwhile, workers and producers, especially women, across the globe – the people we call ‘essential’ or ‘frontline’ workers – have seen their incomes stagnate or even fall, while their rights continue to be violated.
Costs related to COVID-19 reported by the supermarkets pale in comparison to their additional revenues gained and increased shareholder payouts during the pandemic. Few have taken the opportunity to invest in longer-term supply chain improvements to benefit the food producers and workers experiencing extreme hardship due to the pandemic.
Exploitation, gender discrimination and inequality in global food supply chains have been widely documented but remain largely unaddressed by supermarkets.
Violation of workers’ rights is evident across multiple food supply chains in different regions
Between November 2020 and February 2021 Oxfam conducted new research on working conditions in the production of coffee in Brazil, basmati rice in Pakistan and wine in South Africa, and updated earlier research on Assam tea production in India and seafood production in Thailand. Most workers and farmers interviewed by Oxfam and partners do not earn a living income or wage, and some do not even earn a monthly minimum wage. In Brazilian coffee production, slavery-like working conditions reported on Brazil’s official Dirty List to combat slavery could be linked to many supermarkets’ supply chains.
Women’s rights violations in supermarket supply chains are pervasive and systemic
COVID-19 has exacerbated existing structural gender inequalities and made the situation even more dire for women workers and farmers. Oxfam’s research reveals evidence that women workers – who were already earning less – have lost more income than men during the pandemic. Women workers have effectively acted as shock absorbers during the pandemic and will end up worse off, while at the other end of the supply chain, companies and shareholders have continued to prosper.
Until now, supermarkets have failed to take adequate action to address the abuse of labour rights experienced by women in supply chains. Transparency is greatly lacking: of the retailers featuring in Oxfam’s global Supermarket Scorecard, only Tesco has published a gender policy, detailing the actions it will take to improve the position of women in four high-risk supply chains. None of the supermarkets are tracking and disclosing gender-disaggregated data.
Read OXFAM full report here
Supermarket watch Asia is a quarterly email bulletin for social movements about developments in food retail and distribution in Asia produced by GRAIN. Click here to subscribe.
Author: GRAIN
Links in this article: