by GRAIN | 10 Oct 2019
On October 1st this year, thousands of Dutch farmers got on their tractors to drive to the Hague, blocking the streets of the city and much of the traffic in the rest of the country, clogging up more than 1,000 km of roads in total with their tractors. They feel they are being pushed into a corner and unfairly portrayed as the main culprits in the Netherlands contribution to the climate crisis.
The Dutch top court, the Council of State, ruled in May that Dutch policies for granting building and farming permits breached EU law on protecting nature from nitrogen oxide emissions, a powerful greenhouse gas, prompting a halt in thousands of projects including new roads, housing blocks and airports. Livestock farming is a main emitter of nitrogen and as a result farmers aren't allowed to build new barns or expand their livestock.

Some political parties have since been calling for a halving of the number of livestock in the country. Indeed, the Netherlands is densely populated with humans and animals alike: its 17 million people share the small country with 4 million cattle, 12 million pigs and a whopping 50 million chickens, all producing huge amounts of manure.
This is not the first instance where farmers have been cornered by environmental rules from Brussels. Last year, a similar debate erupted in the Netherlands over limits to phosphate emissions, which resulted in the culling of 100,000 cows and put many farmers out of business.
Farmers in the Netherlands and elsewhere are squeezed between a policy environment that has pushed them to constantly expand their farms and produce more, and increasingly stringent environmental and climate rules that put limits on their production. For instance, the limits on phosphates were preceded in 2015 by an EU decision to abolish its milk quota system, which limited the amount of milk farmers could produce. That decision drove the price of milk down and incentivised Dutch farmers to increase the number of cows on their farms and expand production, which they were then penalised for when the EU introduced phosphate limits in 2018. .
Why this constant push for more? The Netherlands likes to project itself as a tiny country that feeds the world. The country exports almost €100 billion a year in agri-food products, a figure that is growing every year. It is the largest exporter in Europe and the second largest in the world. Most of these exports end up in other European countries, but subsidised Dutch milk powder and butter also flows into markets in the Global South, thus unfairly competing with local farmers there.
Of course, the main driver of expansion is the powerful Dutch agribusiness lobby. At the centre is the Rabobank, which built its fortune through loans to fund the expansion of Dutch farms and is now one of the top lenders to agribusiness around the world. Then there are the huge dairy cooperatives, which are really transnational enterprises that collect and process milk, and export their products globally. In addition, 12 of the world's largest agri/food companies have major production or R&D sites in Holland, including Cargill, Heinz, Monsanto, Unilever, ConAgra, Mars and many more. Together, they have lobbied for many decades, in the Hague and in Brussels, to keep the unsustainable subsidy and export growth machine going because they are the ones that benefit most.
Cutting the number of livestock is, for many economists and policy makers, synonymous to cutting the number of farmers. But the farmers are fed up with the dwindling number of farms, with the low prices they receive that do not meet their costs of production, with the constant pressure to expand and increase production, and now, with the blame they are shouldering for the climate crisis. That’s why they took their tractors to the streets, and received a tremendous amount of goodwill from the broader population.
It might very well be that things are starting to shift. At least in the Netherlands there is simply no space for farmers to expand and produce more. It conflicts with too many other needs and objectives in this small country, not the least the need to reduce emissions and deal with the impact of the climate crisis.
Last year, the Minister of Agriculture presented a proposal to move towards short circuit 'circular agriculture' which involves reducing chemical fertiliser, promoting agroecology, integrating crop and animal farming, and selling food more locally. ‘Toekomstboeren’, Via Campesina's member in the Netherlands, congratulated the minister in an open letter co-signed by other organisations member of the Federation of agro-ecological farmers. But the organisations also demand that this should not result in a further reduction of the number of farms and farmers and that the current farm subsidies should be used to keep the people on the land . “We will need to support those farmers that have been pushed into bigger scale and bigger investment and who are now in a desperate situation, and help them to make the switch” 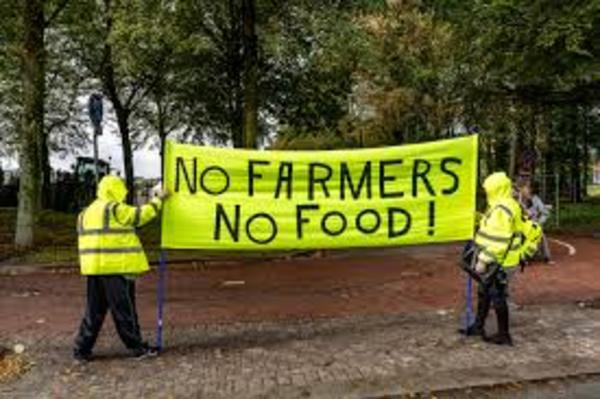 We sympathise with the protesting farmers, but we also believe that there is an urgent need to fundamentally switch to a more sustainable and just food system in the Netherlands, in the EU, and elsewhere. In this sense, it is encouraging to see how the need for climate action in industrialised countries is starting to provoke debate on the contribution of agribusiness to the climate crisis, such as the one around the Green New Deal in the United States, and the questioning of industrial meat everywhere.
Changing the food system has to be done in collaboration and conversation with the farming sector, as the Dutch Federation of agro-ecological farmers requests. But a confrontation with the powerful agribusiness lobby in the Netherlands and elsewhere is unavoidable, since their main interest is always to keep the destructive agro-export model going and expanding.
Author: GRAIN
Links in this article: