by Comité Ouest Africain des Semences Paysannes (COASP) | 7 Aug 2019
Photo: Peasants visiting the seed production plot of the Violet of Galmi onion variety, AREJ, Togo, 2016.
Memorandum expressing the reaction of the peasant organizations and their allies regarding the meeting of representatives of the seed industry main West Africa actors in the in Dakar, 11 - 12 June 2019 of the 17 countries (16 West African countries and Chad).
The meeting subject concerned the harmonized regional seed regulation adopted by all the ECOWAS countries. The meeting objective was to create an environment conducive to the growth of the ECOWAS zone seed industry.
The concerned countries are: Benin, Burkina Faso, Ivory Coast, Gambia, Ghana, Guinea, Guinea Bissau, Liberia, Mali, Mauritania, Niger, Nigeria, Senegal, Sierra Leone, Togo and Chad.
The meeting was organized by the CORAF, the West and Central African Council for Agricultural Research and Development and by the AATF, the African Foundation for Agricultural Technologies. The CORAF is designated by the ECOWAS, as a technical partner, to work with the member states on the national seed regulations harmonization.
The discussions focused on the following areas: the certification for variety dissemination, the quality control and seed certification, the phytosanitary seed certification, the institutional arrangements for seed policy implementation and the participation of the private sector to this policy implementation.
According to the press articles*, the meeting should have to the representatives of the concerned country farmer organizations. However, actually we do not know any peasant or peasant organization that participated in this meeting, the meeting that favors industrial seeds at the expense of peasant seeds.
Poorly known by research workers, the peasant seeds are the basis of the farmer life, in terms of healthy food, livestock, craft, culture, natural medicine, soil richness, and the preservation of the environment and the biodiversity. This is how a sustainable development is defined.
The peasant seeds are grown in the agro ecology, which makes the farmer a recognized breeder.
Despite the significant resources put by the african states for the certified seed production, these seeds remain a minority. In West Africa they represent 12 - 20% for the all crop seeds, according to different sources. The african states have adopted the laws that criminalize peasant seeds and open the gate to seed patenting.
Despite these laws, most of the seeds come from peasant seeds, which constitute a peasant communities vital heritage that guarantees their survival during the good and bad rainfall years.
The biodiversity is the agricultural basis, the biodiversity is at the root of all crops, and the immense diversity within each crop. The peasant varieties are the basis of agricultural biodiversity. The biodiversity in the fields and on the farms is a form of drought control.
The peasant seeds are the pillar of the food security and food sovereignty. By their contribution to the biodiversity renewal, the peasants have rendered an immense service to all the inhabitants of our planet.
The official seed system accepts only the homogeneous commercial varieties and discards the peasant varieties.This system is unsuited to the reality and the african mentality, and it is the cause of the collaboration lack between the peasants and the agronomists, two main agriculture actors
This system is a threat to the biodiversity, causing the cultivated plants genetic erosion. The biological diversity impoverishment leads to the lesser ecosystems ecological resilience. According to the FAO, it is a disaster that endangers the future of humanity, its food security and food sovereignty.

The peasant seeds are the basis of agro ecology, which is gaining more and more interest from African public policies. 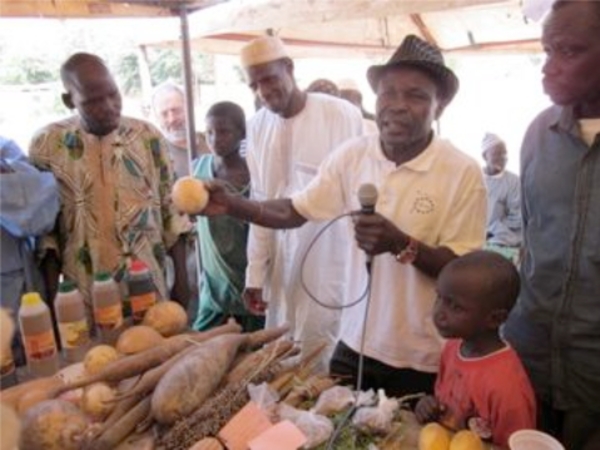 Photo: Peasant seed exchange in Fandene, Senegal, 2011.The international treaty ITPGRFA, International Treaty on Plant Genetic Resources for Food and Agriculture, adopted by the states, recognizes farmers' rights on seeds (Article 9).
The ITPGRFA, in its 8/2013 resolution, calls the treaty signatory states to implement the Farmers 'Rights, including the Action Plan elaboration for the Implementation of the ITPGRFA Article 9 on Farmers' Rights. It also calls the states to adjust their national laws in order to protect and to promote the Farmer' Rights.
There are already some encouraging examples of the Farmer' Right on seeds application. In April 2018: the European Parliament authorized farmer seeds for organic farming. In 2017, in Mali, the consultation framework for the legal recognition of farmers 'seeds and farmers rights, was created under the government direction.
We call on the governments of the concerned countries not to encourage the industrial seed production system.
We urge governments to give the attention to the Farmer Seed System and to open the dialogue for the legal recognition of farmers 'seeds and Farmers' Rights,

We call on governments to make functional the national ITPGRFA focal points that currently do not function normally in most of the countries, at a time when other focal points such as those dealing with GMOs are functioning.

We protest against the principle of free seed movement in the ECOWAS / UEMOA area (Article 5) ** which is the fundamental principle of regional regulation. The seed should not be considered as a simple commodity and we ask our governments to organize broad consultations on the seed laws, in respect of the international legal principle of the informed population consent.
We invite our governments to come and see what we are doing, in collaboration with our partners, during the National and Sub-regional Peasant Seed Fairs, which are now flourishing all over the Africa.

* Implementation of Harmonized Seed Regulations in West Africa: What is the way forward? Agronews, June 11 2019
** Regulation No. 03/2009 / CM / UEMOA harmonizing the governing quality control rules, certification and marketing of plant seeds in the UEMOA, 2009.
Article 5: Principle of free movement of seeds and plants
Without prejudice to Community rules in this area, and in order to contribute to the organization of the common market provided for by the Union's agricultural policy, the seeds circulate freely in the territory of the Member States as long as they comply with the quality standards in force in the Union.