by CEO, TNI, FOEE and FOEI | 24 Jun 2019
New research published today reveals the devastating consequences of the controversial Investor-State Dispute Settlement (ISDS) system. A common ingredient in international trade and investment agreements, ISDS creates a parallel justice system that rolls out the red carpet for corporations to sue states when they act in the public interest. Red carpet courts: 10 stories of how the rich and powerful hijacked justice, by Corporate Europe Observatory, the Transnational Institute and Friends of the Earth Europe/International, gathers 10 recent cases from around the world that show why ISDS and its copy-paste rebranding pushed by the EU have no place in any international agreement. The research comes one day before EU member states’ likely approval of a new EU-Vietnam investment agreement, which includes ISDS-style courts (25 June).
Key findings include:
Public opposition to ISDS is widespread. Countries like South Africa, Indonesia and India, realising the promised benefits of investment arbitration have not materialized, have started to pull out of ISDS deals. But like in the new deal with Vietnam, the EU persists in pushing ISDS, re-branding it as the Investment Court System and pursuing its extension under the guise of the Multilateral Investment Court, which could lead to many more cases of gravely unjust compensation claims by corporations that harm the public interest. Despite persistent controversy, this parallel legal system for corporations continues to thrive and reinforce injustice across the world. 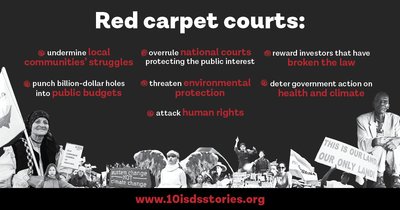 “From Europe to Africa and from Latin America to Asia, ISDS has been used as a corporate weapon against the public interest. Red carpet courts disincentivise governments from changing policies to please investors, at the expense of environmental protection, social justice and human rights. This parallel justice system for corporations betrays citizens and the fight against environmental destruction and catastrophic climate change,” said Pia Eberhardt, researcher and campaigner with Corporate Europe Observatory.
“All EU member states will cancel existing ISDS arrangements between themselves by the end of the year, so ending ISDS is clearly an attractive alternative. The EU’s push to sign new ISDS deals with countries outside of the bloc, like the upcoming EU-Vietnam investment deal, shows clear double standards,” added Cecilia Olivet, trade and investment programme coordinator at the Transnational Institute.
“In Italy, Romania and Croatia, red carpet courts are undermining legal and political victories by local communities, who managed to safeguard protections for mountains and shores. The regulatory chill effect of ISDS is so powerful that in France, the threat of a lawsuit played a substantial part in weakening fossil fuel regulation. And this is just the tip of the iceberg – almost 1,000 ISDS cases are known worldwide,” commented Lora Verheecke, economic justice campaigner with Friends of the Earth Europe.
“This investigation uncovers how mining corporations have systematically used ISDS in Thailand, Romania, Ecuador and Colombia to bulldoze environmental laws and intimidate cash-strapped governments into accepting toxic mines or else face multi-million dollar lawsuits,” said Sam Cossar, Economic Justice-Resisting Neoliberalism coordinator with Friends of the Earth International.
The 10 cases illustrate how companies use ISDS to circumvent domestic courts and to sue governments in an exclusive justice system, when domestic court rulings, laws and regulations undercut their ability to make money. This report is an important contribution to ongoing efforts revealing how big business continues to use the ISDS system to tap into taxpayer money and government coffers, and to show how the EU keeps promoting this system — under a different name — which its own member states no longer believe in.
Notes:
A full copy of the report is available here: http://10isdsstories.org/
The report will be accompanied by three short documentary videos about cases against Romania, Croatia, Italy
For further information contact:
Pia Eberhardt, Corporate Europe Observatory
[email protected]
Mobile: +49 1525 6309 102
Cecilia Olivet, Transnational Institute
[email protected]
Mobile: +32 474 97 2501
Sam Cossar, Friends of the Earth International
[email protected]
Mobile: +61 413496570
Lora Verheecke, Friends of the Earth Europe
[email protected]
Mobile: +32 4 86 31 00 34
Footnotes:
[1] Calculation based on the UNCTAD database, where this information is provided for 658 of the 942 cases, which were disclosed at the end of 2018. Foreign direct investment flows to developing countries totalled US$694 in 2018. See: UNCTAD: Investment Trends Monitor. Global FDI flows continue their slide in 2018, January 2019.
[2] Calculation based on the UNCTAD database, where this information is provided for 213 (69 per cent) of the 310 disclosed cases, which had been decided in favour of the investor or settled at the end of 2018. For the Foreign Direct Investment Inflows to all developing economies outside of Europe and North America, see: UNCTAD: Investment Trends Monitor. Global FDI flows continue their slide in 2018, January 2019.
Source: http://10isdsstories.org/
Author: CEO, TNI, FOEE and FOEI
Links in this article: