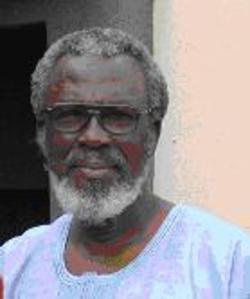 The United Small and Medium scale Farmers' Associations of Nigeria (USMEFAN) is a national coalition of smallholder farmers and their organisations. It envisions a food self-sufficient Nigeria where ecologically sound and sustainable agriculture forms the foundation of an ever buoyant economy in which the small & medium scale family farmers who produce most of the food, in harmony and cooperation with nature, also enjoy enhanced livelihoods, live and work in dignity and self confidence, making the rural environment attractive for and truly supportive of human habitation.


GRAIN: Nigeria is one of the countries being targeted by foreign investors looking to acquire farmland for the production of food crops for export. Can you say a bit about how your organisation USMEFAN is trying to stop such land grabs in Nigeria?

Olaseinde: In general, we have defined our work in this, as in other areas, as strictly grass rooted and bottom-up.  We are aware that policy makers, at all levels of governance, may be expected to be important players in the reversal of the unfortunate plague of land grabbing, but, since mostly they can be rightly described as 'wilfully deaf' players, we do not place our emphasis on lobbying them.

Our priorities lie somewhere else, with informing, mobilising, animating and supporting our smallholder farmers who constitute the community level of ownership of land and who are often the deceived and abused in the game of land grabbing.  We are assured by our members that, once they know what all this is about and are able to share the information with their peers, nationwide, despite their material poverty that is usually exploited by governments and their local and foreign land grabbers, they would be able to bring the problem to an end, sooner than anybody thinks possible.

So, we began with and have continued pushing, grassroots information and animation to get our people themselves, take up this struggle.

On the advice of our grassroots leaders, we have augmented this facet of the effort with advocacy, wide-eyed and undeceived, with the traditional rulers of our land.  These traditional power wielders, who often find themselves cornered by governments and big, seductive money, as our land is chased from village to village to hamlets, etc., are assisted to realise that the people know what role rulers play and how this should be modified, for the good of the general patrimony.

As a general extension of our reach, to the extent that our meagre resources would permit, we network with other CSOs to widen the front of struggle and bring fresh energies and capabilities into the fray.  We are concentrating this networking action on organisations in Nigeria that have shown interest in this effort.  A lot of effort has been invested too, in liaising with and mobilising the media to accept information that they do not already know, and to take the risk, with us, to bring such information to the wider public --- and to government agencies and functionaries.  The other aspects of our general programme in this struggle against land grabbing, await the availability of needed resources, to back up our members.

GRAIN: How are your efforts impacted by what is happening at the international level?

Olaseinde: When we attempt to mount actions based on the power of our people to stop this crippling pillage of our patrimony, so-called Global Development Support agencies and organisations actively work against our effort. These saviour organisations, in their determination to save Africa from Africans and their legendary incompetence, come up with RAI (Responsible Agricultural Investment) and other such subterfuges, to hoodwink Africa and make crime wear the garments of salvation!

We need a comprehensive rethink, to determine what actions are needed to overcome this gangup that is defended as win-win development cooperation.

Organisations and leaders who think and speak in such plain terms, having been labelled extremists of various kinds, never find resource support to do their work but, do we have to sell our continent for 80 cents/hectare, and sell all of it including our right to food sovereignty, in order to receive some miserable crumbs designed to keep us palliated whilst we are completely ruined? We need to think about this seriously and find alternatives that work for our salvation.

It is important for us to look this genocidal injustice direct in the face and mobilise protest against it as Via Campesina, and probably a few other organisations and movements, continue to do. It is particularly interesting to see how in India, the quintessential land of non-violent protest, the majority of civl society groups deal with this problem.

GRAIN: One troubling aspect of the global farmland grab is how governments in several African countries, including Nigeria, have been signing deals with South African farmers to provide them with lands and support to launch commercial farming projects in their countries. The governments say the South African farmers will boost national food security and modernise the agricultural sector. How do you see it?

Olaseinde: As a deeply patriotic Nigerian, a smallholder farmer in Nigeria, and as one privileged to lead a smallholder farmers' organisation, USMEFAN, it is a matter of great pity and shame to have to contemplate such a sell-out. Our so-called political leaders had already started before 2009 to go abegging to these people, thrown out of an African country for quintessential injustice based on the bigotry of race, to come 'teach Nigerians how to farm'!!

I personally encountered members of the initial white farmers' team at two conferences and they were obviously acting in their own, not the African farmers' interests. When challenged, they had no real defence and pretended at none. Our then erstwhile Minister of Agriculture tried to explain this national disgrace by saying that the Nigerian elite were incapable of farming successfully, hence the need to invite the South African farmers to come show us how to do it! This, from a minister in charge of agriculture, to whom our teeming millions of smallholder farmers looked to for correcting the age-old neglect and abuse of farmers in our country.

It is true that the elite, awash with crude oil and other lucrative mineral resources that the country is blessed with, hold farming in contempt and only pay lip service to agricultural policy formulation and execution, leaving millions of smallholder farmers who feed the country to languish in misery.

The same smallholder farmers who produced the miracle of pyramids of Groundnuts in Nigeria before crude oil was discovered, who are ever increasing output of cacao and other crops, and who produce more than enough food to feed the citizens of the most populated country in Africa, are now, along with their lazy upstart elite farmers, being judged as incompetent.

I do not know why a people come to deserve such political leaders as we have had over many years, but I know that the minister, or any leader at all, should never have the right to say such horrendous things about consistently hard-working and competent farmers. Even today, despite five decades of criminal neglect of the most important sector of the economy and its practitioners, these farmers produce 80% of the nation's staple food needs.

GRAIN: What has been the Nigerian experience so far with these large-scale farm projects run by farmers from southern Africa?

Olaseinde: It is a known fact that the same governments that neglected their own farmers, provided these "magical" South African farmers with all imaginable forms of support: credit guarantees, hundred of hectares of farmland practically for free, access to fertilisers and other inputs, newly tarred roads from their farms; freedom to repatriate earnings, etc., Beyond this, the new farmers have had an inexhaustible supply of cheap labour whose conditions of work cannot be scrutinised by any media or reporter and who have not been allowed to form or join unions to protect their interests from farmers from such background as that of the expelled SA farmers.

We now know that these "magical" farmers are moving away from producing staples crops that might boost food security in the country to the less exacting work of livestock farming, especially poultry!

It is a real pity that the sins perpetrated by political leaders, they themselves never suffer from nor have to answer for and it is the rest of their ditched countries that suffer, for long, from their terrible policy initiatives. Nigerian farmers, particularly the long suffering smallholder farmers, have a long struggle ahead of them to humanise the conditions under which they have to carry out their great national task of assuring sustainable food sovereignty for their country. As I expressed to the South African farmer whom I encountered in Bamako, we can only hope that the same contagion which caused these farmers to be thrown out of emergent southern Africa, would not follow them to Nigeria and other countries. After all, it is the same Black Africans in the South as in the rest of the continent.